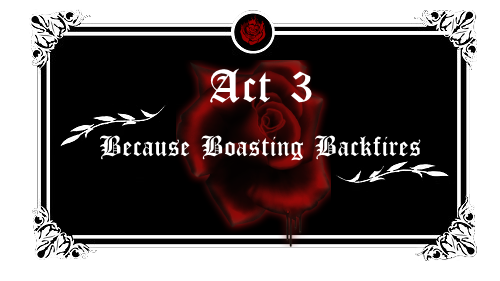 Job Info:
Job Name:
That extra mile
Job Rank:
D
Job Requirements:
1 mage, 1,000 words
Job Location:
Cedar
Job Description:
My, my, aren't you lucky. Here you are enjoying a well earned drink after a hard day of evil doing, and then a group of legal mages walk in. Boasting about their latest job, and how great their guild is. Obviously they needed to be put in place, and what way is better then putting them in some bad light.
And wait?! Did the host just not left his register unattended?
Well... what are you sitting there for dark mage?! You know what you have to do don't you?

Alright get to it, steal the money from the register, and plant it as evidence in one of the legals bags. And off course, alert the local authorities the moment the host knows his money is missing.

Re: Because Boasting Backfires!

The evening had been progressing calmly as per usual, even after the ruckus he'd caused back in Talonia. Aside from a gossip left and right about what he'd brought about there, and how Tundrim had become an individual quite a few people now loathed in Talonia and neighbouring towns, nothing really special had been happening. As such, the youthful saint-in-training had settled in Cedar for the remainder of the day, deciding to spend the night in a quaint little inn around the town’s center, as far away from the harbor as possible. The reason? He didn’t feel much for random heroes and mages to keep rolling in, or even worse, the shady people up to no good. Funny though, seeing how he as a dark mage actually wanted to shun people like himself, even though he'd call himself everything but shady. He just didn't like the less civilised rabble to stumble in and spoil his fun, or the calmth of tonight. Sadly life seemed to have different things in store for him, as a bunch of overly loud adventurers entered through the front door; a group of five, all seemingly very familiar with one another. Albafica saw one of the five wave at the bartender, who nodded and gestured to the staircase. The cloaked mage nodded his head in thanks and excused himself towards his comrades, heading upstairs. The others seemed too busy and chose a table to continue their conversation at, much to the azure-haired mage's dismay, they decided on picking a table near his, leaving him out in the open to follow along with their narratives. Albafica rolled his eyes and sighed deeply. Not quite how he had expected to spend his evening.

And if things hadn't been going badly enough already, they’d started boasting about their latest adventure as well. What was it, escorting a caravan through the desert and encountering a 10 feet sandwyrm? ”Urgh, why now of all moments? Couldn't they just camp out or something?” he muttered to himself. If only they’d just go away… Annoyed, Albafica let his gaze slip across the tavern, hoping for either a free table far away from this one to escape to, or anything else that could brighten his mood. Maybe the bartender knew something that could keep the adventurers busy? He was about to rise from his seat as he noticed that the bartender was nowhere to be found, probably busy in the kitchen, and had left his ledger unattended. That was something just too good to be true. He could take advantage of that and spice up his own savings… or… His gaze shifted back to the group, heavily debating their next job offers. He overheard one of them saying something about Hiro's dagger, apparently a rare drop he'd gain from his fight with the sandwyrm. A one of a kind dagger. ”A one of a kind dagger, huh….?” Albafica thought to himself, and hung about a bit longer to eavesdrop on the group. Looked like the man that'd gone upstairs had been this “Hiro” guy. A grin muffled itself upon the youth's face. ”Looks like I might be having some fun after all.” If he could get that dagger one way or another and plant it near the ledger, then somehow drop the money close enough for them to be suspected, he'd have the perfect case of framing upon his hands. All he'd have to do is hint the bartender and a local official to seal the deal, then he'd have both the calmth and his mood back up in no-time.

Swiftly, Albafica rose from his seat and moved along casually. A quick look left and right was enough to make certain nobody was paying him any mind, especially not with his size, and gripped down the ledger's first drawer, snatching one of the bigger coin purses from it before quickly heading upstairs. Lucky as he was that night, his next target had just been busy exiting his room when Albafica reached the first floor with rooms. Acting absent-mindedly he purposely bumped into Hiro, who immediately apologized and checked whether Albafica was doing fine. For a short moment Albafica felt pity for the poor man he was about to frame, but his friends had been working on his nerves just a bit too hard to make said pity win over his conscience. A swift cut on Hiro’s hand injected the neurotoxins of the youth's blood, knocking him out almost instantly. He quickly dragged the unconscious body back into the room and searched it for the dagger; which he then swapped for the coin purse. Lastly he struggled to get Hiro unto one of the beds, if only to make the man believe that he'd fallen asleep instead of having bumped into him. With the dagger hidden underneath his tunic Albafica returned back downstairs and shoved the dagger unto the lower open shelf of the ledger, and returned to his seat to await the bartender's return.

After five more minutes the bartender returned, and Albafica put his plan into motion. First he went over to the bar again, asking the bartender for another drink, and once having received it and walking back to his seat subtly mentioned the beautiful dagger near the ledger. The bartender frowned and mentioned there was no such thing, to which Albafica pointed at the object he'd so skilfully put there. He saw the bartender's suspiciousness rising as he saw the dagger as well, and the bartender mentioned it wasn't supposed to be there. When he went to check on it and looked into the drawers, the man grew pale, hinting the dark mage he'd done well. He drew closer to the bartender again and subtly noted a small hint. "Maybe ask who the dagger belongs to?" Albafica suggested slyly, sipping from his drink. And as suggested so did the bartender do; Hiro's friends recognised the dagger and affirmed that it was Hiro's, and that he'd yet to return from his room, which he'd been in for an awful long amount of time. A waiter was called in to go get some rune knight officials stationed in town and as soon as they'd arrived a search was conducted in the party's room. Hiro was found there, just barely having come to from the neurotoxins injected by Albafica, but it was seen as merely an act when they found the coin purse right beside him. By the time they'd gotten back down with the apprehended Hiro, and with his comrades being taken in for questioning on basis of possible involvement as well, Albafica had made sure to be out of sight and out of mind. Although all was pointing in their direction, he surely didn't want any of them to recognise him last-minute and throw suspicion into the matter once again.

But one thing he knew for certain, tonight would be night of pleasant sleep.