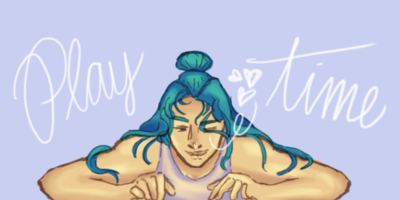 Hot… Sweat gathers from his forehead and gathers in his temples, before dripping onto the stone face below him. His adventures brought him to a range of a forested pillars, deep within a humid river basin. Good thing his makeup is waterproof. After weeks of trudging through the jungle… the same jungle he traveled through a couple of months back to search for his magical tome. Who knew he could learn so much in just a few months. Almost like a final gambit, of sorts. He had been journeying for a couple of weeks now, not really sure what he was even doing out in the middle of nowhere. He was just told by his spiritual grandma that he should come out here… And he was kind of bored, so he figured, why not. It’s not like he needed to eat anymore anyways. He could live out here if he wanted, actually. It’s pretty nice. Fluffy, large, and white cumulus clouds exclusively part the skies, and it rains even when the sky is sunny. Tall trees block the harshest of the sun’s rays with huge, wide leaves and flowering fruits. A good place to spend the rest of your days, if you are physically able. Humid air hangs around the ground: panting with exhaustion, he pulls himself onto a small, stone plateau on a rocky cliff face. A great cliff stands before him and his dumb ass decided to climb up it. For some reason. His spirit grandma in his head kind of prodded him to do so, but also it’s a good bragging right. Imagining himself back at the guild saying, “Yeah, I almost died last week,” and then describing a two hundred feet fall from the side of the cliff face, only to be saved from his magic.

Wait. He mentally groans. Doesn’t he have a spell for this?

He unhooks his backpack from his shoulders and dug around its contents, careful not to expose the opening to the winds sweeping the ledge. He is pretty far up, now that he thinks about it. Ah! There it is. He brings his tome, Luna, to his vision, but still inside the bag. There were lots of loose papers and notes that could get blown away. He flips through a large amount of pages before landing on the page he was looking for. A passage about a spell made on the fantasies and folklore about a rabbit that lives on the moon. He skims through it and tries to quickly memorize it. Yep. Uh huh. After a minute of deliberation and mental practicing, he stands up, confident in his ability to cast it. He closes his backpack, TIGHTLY, and then puts it on his back and pulls the straps so it sits snug against his body. He takes a deep breath and extends his right arm and opens his palm. "Mitus!" A golden motif of a crescent moon appears in his hand. Sparkling light intertwines around his hand and he closes his palm, magical light streaming out between the gaps between his fingers, before he twirls his glowing arm around his body, creating a silvery circle on the ground surrounding him. The circle encloses on his feet. "Lunares LAPIN!" he shouts, before crouching and leaping off of the ground. He launches up into the air, a glowy veil surrounding him, which he read will cushion his fall upon landing. He glides in the sky, in pure bliss for a moment, peering through the clouds at the sun. Wait. It’s not supposed to be a crescent shape. A solar eclipse? Right now? How cool! And he has an amazing view. The spectacle reaches it peak, and the surroundings dim in the twilight-like light. He knows not to look at it directly, but who can resist?

But… He shouldn’t. He hears the wiser people speaking about eye damage.
He begins to turn his head. He… he can’t resist. His head turns on its own. He really doesn’t want to look, but something within him turns his head anyways.

Looking… At it… His body freezes up. It isn’t a magical based reaction. More of a memory… A reaction. A desire to reminisce about the past. He can’t move. The envelope of light around him fizzles out and disappears. He begins falling from his place in the sky. He’s at least two hundred fifty up in the open air. He can’t turn his head, but looks down by moving his pupils. Unable to scream, his skin sizzles with panic before…

Something changes. Grass? On his face? He lifts his head. Something snags on his head. He lifts harder. A blade of grass snaps. He looks around. Oh. Well, there’s his backpack. Thankfully, it looks like it landed in a bush and is relatively unharmed. And his shoe! And his pants? And shirt? And… Oh.

He instinctively tries to cover his mouth. But can’t. His arm won’t reach all the way to his mouth. He looks down. Why..? Since when was there a horse here? He traces his vision from a slightly translucent hoof, to a thin leg, to… His torso? Why? How? He sees the grass underneath him, undepressed despite the weight of a horse(?) on it.

“Seth… Seth! Oh no… I can fix this...” he hears his previous incarnation, which he usually refers to as his grandmother. He also feels his lips moving. His(?) body (or his grandmother’s body?) move towards his body. The horse-like spirit morphs into a familiar form: that of his grandmother. He reaches for his neck, feeling around for a pulse. None. Panic. His form feels unstable suddenly. “Then you’re...”

My soul is united again. From me, to her, to you. We sacrificed our power to live… As a human. She didn’t know that I was her until she died. Same to you. We wouldn’t tell you, lest your ego. We want to live as a human, not a spirit. We do not want to tarnish the experience. But… You… We… Don’t want to end. It is not the correct time. There is so much more potential. But our soul is once again. To split again would create a completely different being. We can revive as a whole soul, combined within our old body. But we would not be the same. Aspects of this spirit will be pushed onto our form… But we don’t mind, right?

He walks toward his corpse, and places a hoof on his forehead. A red protrusion appears where they touch, glowing and then refining into a gemstone. His form disintegrates and flows into the gemstone.

Something changes again. Grass underneath his hands, tickling his palms. He opens his eyes as the twilight recedes and the sun returns from the backside of the moon. (1132)