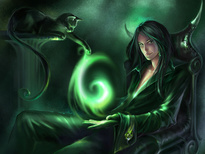 After joining the ranks of the West Fiore Trading Company, it wasn't too hard to put together there was a more darker side of the guild but the details still managed to elude him as time went on. It wasn't until he was assigned a mission that he got the first, small hint that there was something actual beneath the simple Trading Company. "You are to go to a potential client and, while keeping them happy, steal an item in their possession. A scroll that we want, but you aren't to look at the contents." And that was the mission that he had set off to handle, seemed quite easy at the end of the day but he had no idea just what he was to expect with this client of theirs. Regardless he had taken a boat from the Guild and to the mainland, before heading into one of the many cities.

Today he decided to dress to impress, though it wasn't that different from his usual attire, bearing a completely white outfit in look that seemed to be made completely of a type of silk and embroidered with golden designs along the seams. He carried only his long wooden staff that only accented his attire with the series of runes along it, giving him the appearance of a power mage despite his actual strength. After all, one thing he did learn is that it isn't all about actual strength and how you carry yourself. Letting out a grunt did the man eventually come up to a large shop, that seemed to also double as a home, before using his staff to gently rap on the door.

A series of quick footsteps came to the door and there was a tall male with a rough build, lean muscles and a bit of stubble on his face before he would look up and down Leylin,"Safe to assume you're from the Trading Company? It is about time!" The man spoke before turning away and entering the building, leaving the door open and Leylin took that as his invitation into the shop. There was a series of puppets and wooden works along the walls, Leylin speaking gently as he followed after the man into the next room,"Mister Geppetto, I presume?" The mage had stepped into what looked to be a workshop with incomplete pieces of woodwork and such along countless tables, where the man was immediately working on a wooden boy on the table.

"The one and only. I've been waiting for the guild to come talk to me for weeks now, I'm glad they finally got off their lazy asses." He spoke in a gruff tone while attaching an arm to the wooden boy,"I'm assuming you are here to talk about what I can offer and payments, right?" To which Leylin would gently nod his head before using his staff to gesture along the room,"You would be right in assuming that but is there somewhere else we can talk, maybe sit down so we can talk details a bit more comfortably?" To which Geppetto would put down his tools and look towards the man, raising his brow and examining him from head to toe. Without more words he nodded his head and gestured for him to follow, leading to the stairs in the back and eventually into a well furnished living room.

Geppetto motioned for Leylin to take a seat before disappearing into the other room, running water soon being heard as he cleaned his hands,"Do you want anything to drink?" He called out from where he was and Leylin expressed his want for something strong,"My kind of man!" The workman eventually came back into the room holding two glasses in one hand and a large bottle of liquor in the other, taking a seat on the couch next to Leylin and placing the contents on the table. The mage had placed his staff against the couch, unworried about needed to fight at all while taking his glass after Geppetto had filled it up,"You do a lot of good work, I can tell that just by what I saw down there. Must be hard though, you do all this by yourself?"

The inquiry about himself actually caused Geppetto to be caught off guard but he nodded his head, not use to talking about himself,"Yeah, actually. Long hours and seemingly longer days, I do repairs, too. Even with the business I get, I don't ever have enough money to hire help." He grunted, expressing that connecting to the Trading Company will hopefully get him more income and he could get off his feet a bit more. Over the next few hours, as the two men would put back drink after drink, their conversation shifted from business to personal.

It wasn't long before the two were seemingly drunk, shouting and laughing over things as the sun disappeared into the sky and eventually night came. Geppetto was facing Leylin on the couch, both smelling heavily of alcohol before they shared their first embrace and it only escalated from there. It wasn't long before they were in Geppetto's quarters and a series of events ensued that ended just as the sun was coming back up. Of course, both pleased and drunk Geppetto was sleeping like a rock while Leylin easily slipped out of bed and would begin to look around the man's room while completely nude.

That was when he heard the floorboards underneath him squeak loudly and it was clear that something was underneath there, easily pulling it aside and revealing a series of contents beneath. Gold, personal papers, business papers, and the scroll that he had come here for. It was easy for Leylin to grab it and slip the wood back into place, deftly slipping into his clothes and tucking the scroll away in his robes. While Geppetto was sleeping off his wonderful night, Leylin grabbed his staff and would disappear into the morning sun, returning the guild with a completed mission and a very happy client.