Because Payback Gets Paid the Hard Way

Because Payback Gets Paid the Hard Way 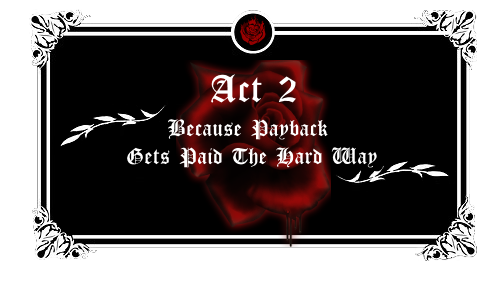 What's A Girl To Do:
Job Title: What’s A Girl To Do
Rank: D
Player Requirements: 1-4 people, no more than one C-rank or above characters. 1000 words per character, 1500 for solo.
Job Requirements: Dark job. Beat the crap out of the girl's civilian boyfriend, and possibly slander his name. Fail the job if he is killed.
Job Location: Hargeon Town, OR Talonia, OR Rose Garden
Job Description: “My boyfriend cheated on me while I’m pregnant with his child. With two other girls. One who has already given birth to his other kid. All of us are pissed to say the least. We’ve formed an unholy alliance of pure revenge and want to hire you to beat the living crap out of him. We will also pay you extra is you slander his name so badly no other girl will ever look at him again. Be creative. No killing please, we want him to live with his mistakes. Sincerely the Unholy Alliance of Angry Ex-Girlfriends.”

Reward: 1K jewels for beating him up, another 1K to slander his name, and D-Rank exp. Only exp if the boyfriend is killed.

Re: Because Payback Gets Paid the Hard Way

”Ladies, please, you shouldn’t underestimate my person even if I don’t quite look the part of the one to exact your sweet, sweet vengeance.” Albafica said, looking at the three young women one by one, awfully keen eyes making sure each and every one of them had seen something disturbing behind those azure pupils. He smiled as one awkwardly shuffled closer to her fellow deceivedees. ”Haha, I figured as much when appearing before you in this form… perhaps I should just give all you fair ladies a taste of what exactly awaits the poor, unfortunate soul whom you’d like to see ruined.” Albafica said with a small bow as he stood up and walked from behind the table, revealing a simplistic tunic covering his child-like, ten year old body. A child by body size, but mentally and physically trained to have become much more than that; Albafica acted all but his age, and could justify his mature way of thinking and acting by actually looking the part through his magic. The mage smiled and merely snapped his fingers, immediately being surrounded by a golden aura that served as the nurturing of his body for a temporary grow spurt. His body crept up inch by inch, growing in both length and muscle mass, while his facial features became more defined and refined alike. His azure hair waved softly upon the tensed breeze created by the aura, carrying it like a cloth of thin silk as it too grew longer and more vibrant. His body covered itself with parts of golden armor, and before long the small child had been transformed into a fine man, one of refined elegance that towered above the now petite women. Giving them a gentle glance, the Saint made a bow, introducing himself in the process. ”Miladies, I’m Albafica Temero, forever at thy service… to deliver punishment upon the scum that tried to lay hands on all three of you. Rest assured, I shall make sure he’ll regret ever having enjoyed his life with such immature banter.”Albafica ushered softly. ”Nothing too bad of course… lest you wish me to give him more than just a scare, that is.” The smile upon his face was surprisingly eerie, and it was hard to distinguish whether he was looking forward to hurting the man or was just one of those guys who's smile was naturally scaring. But the air around him changed almost instantly as he gestured them to take a seat. ”But please, do take a seat first. Then we can discuss business in more detail, as such is my intention to follow your every wish.”

Re: Because Payback Gets Paid the Hard Way

”You think you can escape me, you jackass???” Albafica roared at the top of his lungs, in an almost delirious tone as he chased the man down the smaller streets that lead towards the arena. The man, Tundrim, glanced over his shoulder with panick overruling his eyes, only to be met with the azure eyes of his pursuer only a dozen feer away from him, gradually closing in. It wasn't this man's appearance that made him overcome with fear, but the insane look in his eyes that had caught Tundrim off guard. The eyes of a bloodthirsty killer. He knew better than to stick around when their eyes had first met, but sadly for him Albafica had recognised him as his prey. And he was now to be hunted and disposed off. Or so he thought. There were many a man who'd want him dead or “incapacitated” one way or another; which wasn't so strange seeing his chosen profession as con-man… but to see them send a lunatic made him wonder truly. Who had he pissed off to such a degree that they'd sent a presumed hired killer to deal with him. Lucky, or unlucky depending on how you looked at it, he'd soon find out.

Albafica closed in on Tundrim and jumped; a single back kick suddenly jammed itself into his lower back, making him catapult unto the hard cobblestone road. The impact was harder than he'd expected, and soon enough he found himself staring up into the eyes of his assailant, now towering above him with a devious grin on his face. Slender fingers clutched themselves around the neck of his shirt, pulling him up to a semi-seated position. The azure-haired man gave him a smile as he spoke, yet his eyes never shared that smile and remained ice cold. ”The ladies send their regards.” Albafica mused in a honyed voice as he rose his fist, striking Tundrim before he had the chance to retort to speaking. For Tundrim, everything faded to black once the fist hit his face, sinking into unconsciousness.

When he came to, his jaw was throbbing painfully, and his face felt cold. He was laying on something hard… A shiver ran down his spine as a cold wind blew past him, and immediately Tundrim opened his eyes to look upon an almost stunning view across Talonia from way up high. His fascination turned into shock as he realised where they were; Talonia Arena, on one of the heighest points, hidden from anyone's view downbelow. ”Oh, looks like you're finally done with your beauty sleep.” A voice called from behind him, and Tundrim panicked. “WHAT DO YOU WANT FROM ME?!” He shouted, trying to crawl away. Further than a clumsy fumbling was all he managed to go before something rigged him back in place, yet he couldn't see what it was. Albafica shuckled. ”Don't bother, you won't be going anywhere without my permission… and I want nothing of you. The women you so happily played with however, do.” He said, rising to his feet and walking over to the downed man. One of his fingers flicked towards him, and as if forced by an unseen force Tundrim lunged forward, suspended midway a face-down fall. The Gold Saint squatted down and tilted the head to have his target look at him. ”Look here Tundrim, I won't make this hard on you. The ladies don't wish you dead, so we won't be going down that path…. it'd be too easy to do that. However, I advice you; try not to resist what's keeping you in place. One wrong move and I'll snap your leg like a twig. A broken bone or twelve won't kill you after all, so I wouldn't be going against their wishes if I did. You understand what I'm trying to say, right?” Albafica smiled brightly. Tundrim wasn't quite convinced and was ready to bring out his nicest vocabulary as the azure-haired man cramped his ring finger; a short snap, and Tundrim cried out in pain as his arm contorted in an unnatural way. He was wheezing deeply as he stared at his captor. ”You were saying...?” A sly grin settled on Albafica's lips. “I… understand.” Tundrim managed to say inbetween the enormous pain he was experiencing. ”Good, looks like you're a smart man after all.”

Albafica stood up again, and motioned his hand as such to put Tundrim in a more comfortable position. He'd rather get rid of this type of weak trash immediately, but his contractors had wished for him to be humiliated and feel their suffering first-hand. As such, Albafica would do exactly what they'd asked him to do. ”We'll get straight to the point then. You'll be paying for your crimes in the best way possible… public humiliation. We're gonna make sure everybody knows what you did and are capable off so that word spreads to the other towns as well. And then you're gonna leave Talonia. For good. And do mark my words when I say that if I ever see you around here again you won't be getting off this easily…” he threatened. The man however did not seem like he would disobey him at this point, which was a win for him. "But anyway, let's just get down to business, shall we? It's gonna be really simple. You go down there, and remain within the very middle of the arena during the upcoming shows and battles. If you dare run, I won't miss and you'll be having the time of your life in the hospital."  "That's not so bad..." Tundrim muttered to himself, but it hadn't missed the azure-haired man's ears. "Oh no, there's still more to it, Tundrim. Far more..."

It didn't take long for the entire crowd to be hyped up by the surprise act suddenly touring around the center of the arena. A half-naked man, sporting nothing more than his boxers, with "I'm a big fat lier, Got 2 kids and simultaneously cheated on 3 women, #BestDad, #YourWife'sNext" written all over his body in large, red letters. Albafica had invited the three women in question to attend the arena's shows today, and from a distance saw the pleased looks on their faces. Although their suggested words he had written on the man could've been more creative, it got the message across, and that was all there was to it. The crowd however seemed to get divided the longer the message was actually being shown on the screens in the arena; some laughed, others booed, and he noticed how a handful of couples suddenly started arguing. The azure-haired mage grinned. He'd done what needed doing, the rest would sort itself out. And if not, they would know how to contact him.