Cultivation of The Body and Mind 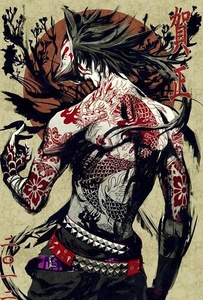 Cultivation of The Body and Mind

Kuro Yamigitsune sits cross legged under a tree breathing in and out feeling the cool sensation of the Shadow Chi circulating all over his Meridians and Dantian. He feels the excruciating pain as his body and bones crack and rebuild in an anebolic way as if he was working out like a mad man . Sweat drops off of his brow as he feels a mental awakening as if all of his senses perfectly click into place. His body becomes the perfect pedigree of Immortal  Musculature. His brain awakened all of the supernatural senses that a Cultivator needs as he forms it into a Martial Arts Combat Magic called Black Fox Leaps from Shadow. it is a ruthless and brutal style leaving bruises and broken bones upon his enemies.

Re: Cultivation of The Body and Mind

Kuro does some stretches and katas to improve the flow of his Shadow chi as  he thinks of his Father Shinku and Hideki his uncle that betrayed his father and caused the death of his Family and clan by bringing savage skull there. His rage builds as he punches at the tree leaving a Gigantic Dent as he takes a sip from his waterskin.

Re: Cultivation of The Body and Mind

Kuro waits cross legged as he continues to drink his waterskin and waits for another person to pass by or come and visit. It is a very lonely to attain  Cultivation of Body and Mind. He hopes one comes soon. Because he does not know how much longer he can keep sane. As long as he has been meditating he has seen Yamato No Orochi in his visions calling to him but he will not dare go unless a true calamity will come. not any sooner.
« View previous topic · View next topic »