Personality:
In a land where time never ticks, and those that live there exist without the tock; Xeno hails from somewhere rather interesting. In a land that never existed in time, and only those that are lost can be found there. Xeno had an interesting time there, and as such his look on the world is different. Physically, the age that you are when you arrive there doesn’t change. The magic of the land allows only the mind to develop, as such Xeno sees everyone as being the same. In a sense this means he could see a child as an adult depending on their actions, but at the same time he could see an adult as a child. Regardless, he doesn’t use age as a reason not to do something, or to do something. He’s rather normal from there once you also look past his little crazy issue. I didn’t mention that before? Yeah he’s a little out there due to his time in the land that was never supposed to exist. Dumped out onto an island at first as a teenager, he started off eating animals before hunting as one, this means eating what they ate, even if it was a person. Food was food to him. Though at a glance, many just see something innocent at first when they glance at him, though if they look at his eyes it’s a different story.

Listening to all this makes you wonder what is it that drives a man like Xeno? Revenge of sort. Xeno while looking like a teenage of just 18 or 19, he has seen things that would drive a normal man insane. (Most likely the reason he’s so unstable as it is). After the ripe age of 14, Xeno was changed. Bronze shackles bolted around his ankles and wrists, holding him to a rock. A muzzle was cold welded in place so to keep him from speaking to anyone, keeping him from pleading for release. Like this he was kept in the land that never should’ve been. The chains rusted every time it rain, and looked as if they would crumble, but enchanted to repair themselves from natural wear. Years, he watched them corrode, and repair while being chained like a beast, and guarded by beast so that no one could even free him. One day, his punishment for a crime he was unsure of was freed, and dumped upon the island where he showed his brokenness, though in his mind he wanted nothing but to get back at the one that chained him.

When it comes to fighting, Xeno is a little out there. He doesn’t have one direct style, as much as he adapts with how he fights. He’s a learn on the fly style of fighter, meaning he would take a hit or two to figure out what he’s dealing with, and then combat it from there. He’s not afraid to get his hands dirty either, in fact he prefers his hands over tools or flashy long ranged spells. He loves the blood and gore that would spill from the man or beast that he would kill or maim. In terms of taking orders, it doesn’t go very well nor does him giving orders. In neither case will it work due to him being naturally warry of people around him, and at the same time his style of combat is rather solo over needing support.

Height: 5’7
Weight: 163lbs
Hair: Black as the moonless night
Eyes: Red
Skin Tone: Pale
Appearance:
Xeno is a lean and fairly muscular young man of average height. He has red, ringed eyes and black medium length hair with a long, segmented ponytail that stretches down to his ankles. He wears what could be identified as a choli around his chest, a small one that leaves his chest mostly exposed. Carrying on with the foreign attire he dons what seems like an Indian leg dress that comes down to his ankle. Most of the time he will go without wearing shoes, but if he does they will be simple sandals. 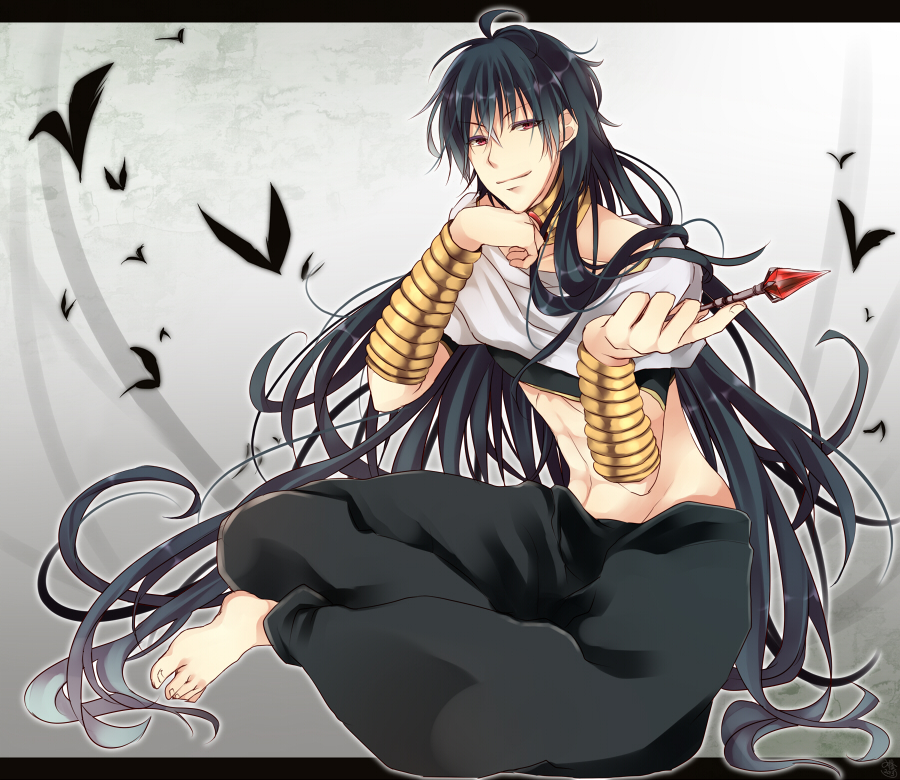