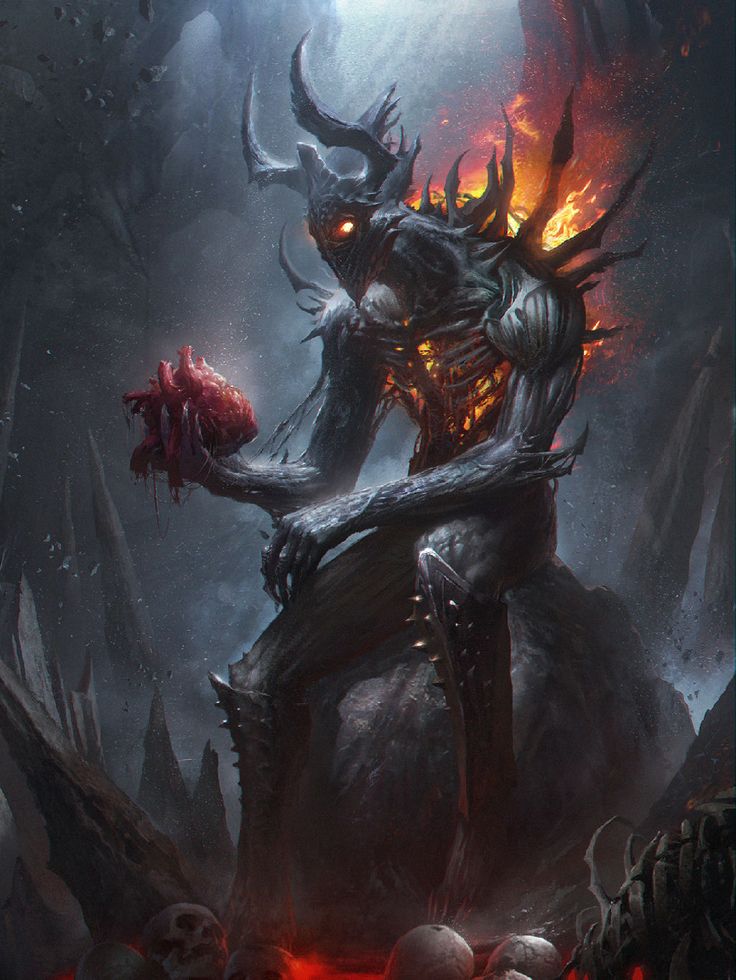 Ras, The Undead Ent
Undead Ent - Grim Dawn Form - Guild Spell Boon
The Undead Ent, The grim form of one Jaeger Nekros Kruger. The spell of Grim Dawn changes the man into that of his magical nature, an Ent. Given the corruption of the pact and becoming like those of the undying, it further changes him into an undead like tree demon creature. The creature’s chest has been eroded, showing a rib like structure covering a fire within. On it’s back, branches and bark like skin is split open, exposing the fire to the outside world. This fire has no effect on his health or anything, not that it can just be put out. The rest of his body is greyed and dark in color. It’s texture feeling like a de-barked tree or a very smoothed tree bark. While in this form, Jaeger can only say “Grim”.

Grim Item: Horns of Grim
Body Mutation - Artifact
A confusing “Item” indeed, as the item in question takes the form of a body mutation. Magic is not always known to do what you want it to, especially if it’s your first exposure and experience with said variation. This rang true for Jaeger, as horn sprouted from his forehead and gave him a couple rather unique features. Now, they also appear when the mage has been transformed into Ras, though in a different formation and structure. Jaegers appear to be more ram like in nature, large and curved backwards. Ras’s Horns are more deformed, as if they wanted to go back but were forced forward. However, that’s not exactly what makes this item confusing. The confusing part is that the abilities of this item don’t seem to fit the appearance it was given. It’s almost as if Ras was the entire item but the horns were the only thing to come bulging out.
Strengths

The Undead Forest:
The Undead Forest
Rank: Ranks with the User (Scales with the user up to Rank S)
Type: Supplementary. Terrain Change. Nature.
Description: The ability of this Undead Forest is to summon The Undead Forest from the Realm of Grim Heresy.  It's a large woodland area where the trees are twisted and cruelly manipulated. They look to be rotten and dead, however that just isn’t the case. The trees constantly create the thick fog that litters the forest. The fog and trees are what makes this place so unique and bounce to the terrain it was summoned in. It has the ability, or rather magic, to suppress various things such as sounds, senses, and sensing abilities. Its an area unfamiliar to all but Grim Heresy, affecting those that do not bare the mark of Eris.

The forest maybe summoned anywhere there is ground, meaning anywhere that isn't a large body of water. The size of the forest depends on the strength and rank of the user. The effects of suppression are based on the users rank of sensing ability.
Effects:

Main Reference Picture: https://i.servimg.com/u/f97/11/90/77/49/oz_tga10.jpg
Below are other images to help show the atmosphere of the forest

Legion of The Undead Forest:
Legion of the Undead Forest
Rank: Ranks with the User (Scales with the user up to Rank S)
Type: Multi-purpose Summoning. Nature.
Description: Legion of the Undead forest is a summoning ability, much like the trees that Jaeger summons as a human. These things that Ras summons are undead tree beings, looking much like demons made of  wood, bark, and dead branches. Inside of these demons, a fiery glow can be seen. It’s noticeably seen through their eye sockets, mouth,and nose. They take after their summoner, Ras, in this aspect. These creatures have half (50%) the health and Damage output that the originator is able to output. However, despite their health is lacking , their resistance to damage partially makes up for this. For attacks and damage sources of ranks below Ras’s, the creatures have a 50% damage reduction. For attacks at user rank, the undead trees have a 25% damage reduction. Any damage from higher ranked spells and attacks, these beings gain no reduction. Further note, They cannot have infinite amounts summoned. With each summoning, the base number is 5 Demons. For each rank above D-rank, the user may summon an additional 2 demons.
Appearance: https://i.servimg.com/u/f97/11/90/77/49/tree_d10.jpg
Duration: Until destroyed.
Cooldown: 4 Posts
Strengths: