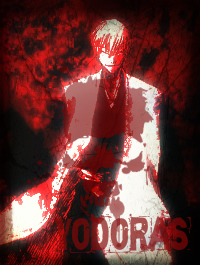 The Skies above Oak town were dark and dreary, as a storm was slowly rolling its way over the town, as the residents took shelter one loan figure could be seen slowly walking to the house of the towns most prominent Gardeners. He was average in height, thinly built and was wearing a black robe with a cloak draped over his shoulders and hood covering his head. The figure was walking to the house of the previous reigning champion of Oak Towns Annual Gardening Festival Miss Coldflower. The Figure casually walked into the house his cloak and hood seeming dissipating into a black mist that then went into his body. Yodoras then moved to the left eye and had the swarm analyze the interior of the house.  Living Quarters of Client 0013 Analyzed, Client nowhere to be seen Engage Searching protocol X02. The Disguise suddenly turning in a black metallic form that then shifted and reformed into the appearance of a small girl wearing a kimono, “Excuse me, is anyone home?” The small girl stood there for a moment when a door was opened as a Grim looking older lady came out, “Hello there dear, is there anything I can assist you with?” The small girl looked at Miss Coldflower as the left eye started to glow red, Client Verified, engaging Mission protocol 8029. The small girl stepped forward, “I am here for a certain, job you had listed through certain channels miss, I am sure it hasn’t been taken right?” The Childish tone Yodoras added to the small girl caught Miss Coldflower off guard, “My… I didn’t expect someone… so young to be taking on that request… But yes the offer still stands, Are you sure you are up to the task my dear?” The young girl stood there for a moment as Yodoras moved through the swarm it was made out of.

“Why Yes I am capable, more capable than you will ever know,” The girl then turned around and skipped outside, Engaging mission protocols, Assassination Target Andrea Cooper, engaging scouting protocols A41, The little girl then shrunk down in a black mist that coalesced into a Blue bird that then flew off. The bird flew across the town to an isolated house near the northern outskirts, the house was surrounded with lush greenery, it had a large dome greenhouse out back other than that it was a quaint little residence. The bird landed on a branch and studied the house, An elderly woman was out front watering some flowers, and numerous children was all around the residence taking care of the various plants.  A few ran up to the old woman and addressed her as teacher and then ran off towards the greenhouse. Situation Analyzed, Andrea Cooper, recent winner of Contest, Teacher to group of Kids in gardening, Best Course of action: Infiltrate group and Eliminate the designated target.

The bird then took off and then grew into the small girl again behind a tree, and then ran out towards Mrs. Cooper, “Miss Cooper! Miss Cooper!” Mrs. Cooper then turned around and saw the girl and gently smiled, “Why Hello My dear… What can I help you with today?” The girl stopped right in front of her and started to jump up and down, “Can you teach me how to take care of plants as well??” The old woman smiled and nodded her head, “Why of course deary, I am happy to teach anyone who wants to show love to nature.” She then waved the small girl to look at the flowers she had been tending, “The first step is to love the plants as you nurture them, that way they will grow and show that love to everyone.” The Small girl walked up and looked at the flowers seemingly in awe, however within the combines of the disguise Yodoras hung at the core silently taking in all the information of his surroundings,

Love… what is this emotion? My creators seemed to make it unimportant as they didn’t bother to install such protocols into my Mainframe… IT is not needed for an entity like myself….

Suddenly one of the other students came up to Miss Cooper and said, “Miss Cooper Its time for Lunch!” The old woman looked up at the sun and nodded, “Indeed my dear time to gather everyone for lunch, we will have it in the dining room, come my dear come and join us.” The small girl was caught off guard and nodded, “Sure!”  The small girl followed the old lady into her house which then they went into the Dining room where ten other people were already getting the table set. Miss Cooper kept going as the small girl stopped and looked around, Yodoras moved to the left eye of the disguise as it analyzed the situation, Every Subject on the Grounds seems to be concentrated here, must calculate a way to Isolate the target, Yodoras adjusted its optics when another voice seemingly ran through its system, No, It would be much more fun to kill all of them…. Yes… that’s right… It will be much more pleasureable… to feed off their torment wouldn’t it? Yes it would my pet…. Now go, use my power, devour your prey, Understood, Objective changed, Engaging Assassination protocol 3403. The small girl started to sway back in forth to some kind of music only she could hear as one of the students noticed her behavior and walked up to her, “Erm Are you okay? If your hungry Food will be ready soon okay?” The small girl suddenly stopped swaying, her hair covering her eyes, “Dark…. Silence” Suddenly all sound was muted throughout the house causing everyone to pause as they looked around they failed to notice two rifles being formed next to the girl.

The small child who had gone up to her turned his attention back to the girl and seeing the guns jumped backwards, however before another step could be made he fell backward from being shot point blank in the head. A few of the others saw this, tried to yell out of fear but no sound escaped their lungs as they were then shot dead, Yes my pet… feed of their torment, their fear consume it… revel in it…. The small girl suddenly jumped into the air while spinning as a few more silent rounds were shot off killing the last of the students, that’s when Andrea Cooper walked back into the Dining hall and dropped a bowl of biscuits in shock of the scene. The Small girl turned and faced her with a wide creepy grin on her face with a few splotches of blood on her face. Andrea Cooper then fell backward out of fear, the small girl began to seemingly laugh as she let go both of the guns and they dissipated into black mist. She then pointed at the Wide Eyed older woman as her arm turned into a black steel spike that shot forward and impaled the old woman, and then shot out numerous smaller spikes shredding the womans body into a bloody mess. The young girl retracted the spike and began to sway back and forth once again. She then jumped off the table and grabbed an empty bowl and walked out of the house as Yodoras cleaned the blood off the disguise.

A few moments later The small girl arrived back at the Coldflower estate with a bowl full of biscuits. She then walked in and said, “Miss Coldflower?” After a moment the client walked into the room with a start, “So-o Is the deed Done?” The Small girl only smiled and shook her head, “Yeeeeesss… The miserable pack of rats is dead.”  Miss Coldflower grew pale, “Re-Really? Are you sure it won’t be traced back to me?” The small girl placed the bowl on the dining table and held out her hand, “Yes my dear…” Miss Coldflower reached into her pocket and placed a small bag of jewels in to  the hand of the small girl who then closed her hand and put it back to her side, “Are you absolutely certain?” At this point the small girl frowned for the first time, “Yes… why don’t you take it easy… sit back and have one of Miss Coopers Last biscuits?...” With those words the small girl walked outside and with that Miss Coldflower sat in her recliner and put her face in her hands.

When The small girl was out of sight of the home Yodoras reverted back to his usual disguise and stopped. At that moment Miss Coldflower reached forward and grabbed one of the biscuits and looked at it, when all of a sudden she screamed. Suddenly there was an explosion that engulfed the entire house, burning it to the ground, Yodoras simply smiled, “All loose ends tied up… Death should be pleased…” With that Yodoras pointed his finger forward as a Dark doorway appeared as he stepped through it, and disappeared from Oak town.
« View previous topic · View next topic »