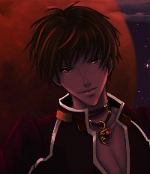 Job Description: A high end restaurant in Oak Town is holding a major dinner for some of the most wealthy people in the nation. All sorts of people have turned out too this event, and the Oak Town Restaurant is short more than a few hands! Head there and help them out! Show off your gourmet abilities for the rich and famous, and become known as an Iron Chef across the land as they leave satisfied with full bellies!

(Note: The name of the restaurant and characters involved are up too you, show us your stuff!)

Reward: 550 Jewels and Some Renown Across the Land as An Iron Chef due too your excellent cooking abilities!

Well this was one of the strangest jobs he’d ever taken. What the heck had he been thinking?! Never once had Tristan as much as stepped foot inside a kitchen; it was the allure of food… that delectable scent that wafted through the air that enticed the young wizard to accept. Now what? It slowly started to dawn on the young wizard that he should have knew something wasn’t quite right when the client turned out to be from a high end restaurant here in Oak Town. What was he to do now? If he simply quit that would set a horrible standard and the most likely result would be word getting out about it. After that he’d have difficulty getting jobs.

“WHAT ARE YOU DOING!?” The unexpected shout actually caught Tristan by surprise and immediately drew him out of his thoughts. The young wizard practically leaped and spun around in midair to see a rather short rotund looking man with a scarlet face looking up right at him. “Uh,” he said with a great deal of uncertainty. His first reaction was to attack but this job wasn’t supposed to involve any fighting which was another reason he was a little hesitant to take it in the first place.  “Uh? UH!? Don't just stand there saying uh,” the scarlet faced man said. He jabbed a pudgy little finger into Tristan’s chest and proclaimed for all to hear, “Put that hairnet back on and get to work! This food isn’t going to prepare itself now will it?!” The man started to turn away only to stop and wave his finger at the young mage threateningly. "And so help me if I find even a single hair in any dish served tonight... well you won't get any money out of this restaurant! You can rest assured of that!" With that said the head cook turned and stormed off into the kitchen only to scream at the next person about something they did wrong.
_____________________________________________________________________________________
Character|Vault| Magic
Kranzer

Rather than reacting as he normally would and knocking the guy clean out Tristan opted to listen to his stomach rather than the incessant need to fight something. The low rumble encouraged him to turn away and focus all that energy elsewhere. After a little bit of instruction he realized this might be easier than he originally expected. An array of vegetables had been set on the table before him along with some tools he’d need to handle it. The first task was likely going to be the easiest. There was a sack of potatoes that needed to be peeled and then cut in a precise manner so they could be used as an ingredient for the first course.