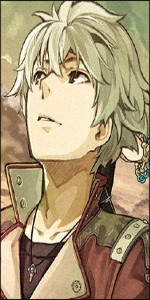 Its been a long day, Kayla figured she needed a break. Down in magnolia Kayla had benched down on a rusty chair, hunkered over as she glanced at the sun. Just chilling out here was pretty nice watching people the ones that had no idea how to use magic. If only she had that life, she didn't wanna deal with crazy people. She hated doing jobs but that is the price of being in a guild, gotta earn the money one way or another. As Kayla had sat for a while she felt thirsty, glancing around she noticed a wooden tavern. The blackrose member eyebrow has rose, drinking would be great on such a nice relaxed day. Walking towards the tavern Kayla had already had a drink before Griffon and a little dragon had walked in making the tense blackrose a little bit more loose and ready to have some fun. She glanced over towards Griffion when he had sat down next too her. Giving the stranger a thoughtful glare before glancing at the dragon. She said something to him, "Cute little pet you have there sir. " Kayla Croft had said before turning back to her glass of booze.
Griffon Knighthunter

Kayla's eyebrow rose she didn't mean to offend the little dragon but she didn't know how the word 'cute' was offensive. Shrugging it off she nodded not minding the guy didn't seem to leave good first impressions, coming off a bit rude but Kayla didn't mind again if she wasn't drinking this good shit she'll probably shock the fuck out of them. "No worries" The brunette had said plainly giving a glance at the two again lightning flowing over her fingers. "My name is Kayla, and you two seem well for each other." Kayla said thoughtfully before sighing. "You always need a partner that will have your back no matter what happens.." The brunette said closing her eyes in remark of the bad memory finishing her drink before pointing at the bar-tender. "Another one" Kayla had said looking at him before saying. "Please"
« View previous topic · View next topic »