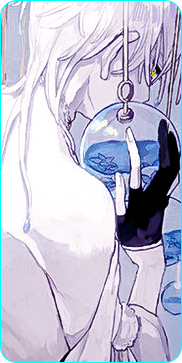 The sun radiated it's warmth upon the people that moved through the crowd. The Capital Crocus was, as accustomed, packed with people as they moved along in the congregation. “Excuse me. Coming through.” A petite figure was hidden between the mob of people who moved, not caring about anyone else. The black haired female, previously referred to as the petite figure, squinted those purple orbs of hers and tried to make her way through all the commotion. The female was in fact Riley Nightwalker, your average legal mage belonging to the infamous guild of Sabertooth. Riley could feel her breaths getting shorter and faster as the heat caused her to sweat immensely. Her moist clothes clung  to her body; one thing that she absolutely despised.

Her body immediately felt the impact of colliding into something, or rather, someone. Riley lifted her gaze and contemplated the man that stood before her. He was much taller than her, like most people that the female had encountered. He had lengthy black hair, the same color as her own. His crimson gaze emitted a sense of fear through her. The man had an uneasy aura lingering to his body. His revealing pale painted body peered through the covering cloak. The female spotted blotches of red, immediately knowing that this man had been injured; which she also determined by the groan that escaped his lips.

Before she could proceed to say something, this unknown ‘gentleman’ spoke up, leaving her shocked. He sure had the nerve to talk to her like that. Her argumentative side instantly jolted to the surface but before her lips parted to let her voice escape, the man clutched his side in utter agony and asked for help. This sudden change softened the female’s features.  She stood quiet for a while, studying the man. His offer caused her to glare at him. Without uttering a single word, she gently lifted his arm and slung it over her shoulder, swaying through the crowd as gently as she possibly could, to avoid the stranger’s wounds from being touched.

Within a matter of a few minutes, along with a few rough tugs from passing people, the two individuals reached a nearby clinic, where the purple –eyed female had led them. She was familiar with the city and walked in to be greeted by the young nurse, who stared at the man next to Riley for a while before tending to his wounds. The nurse dragged the unknown man into a room and minutes later exited the room. The black-haired mage walked inside and looked at the man, “I didn’t help you for money. I helped you for the sake of humanity.” His wounds were bandaged but the female could determine that he would have difficulty in moving for a while. It was then that her eyes landed upon the now revealed, rather familiar guild mark that stained his shoulder.
484 words@Simba/NaiLittle by Little
xxx
Simba

HEY LUCID DREAMER MAKE UP YOUR MIND
❝
Silence. The youthful girl was voidless of any counter to what his own tongue had fathomed, wavering lids - dusted by a shade of scare plum - consumed by the splintering pain that prodded at the nerves of his scathed form - unable to percieve an expression that unknowingly decipted her gentle features. Consistent semblance of dejection grated a path of emotion along his rhythmic beating heart, lashes of raven cleaving hesitantly apart to expose the enchanting red that inclined beneath - only peering toward a set of dirtied feet. Had she already disembarked? There came no surprise on that regular matter - a demeanour of bitter spoken words was enough to drive others away. A composure of flawless lies that vomitted a venom-like tone would carelessly spew from his own beaming lips - fearless to make others loathe, but at the same time, seeking for a hand. He had already urged himself to believe something so absurd would ever come true. At least, not for him.

But, albeit, the crown of raven alifted. Tired eyes clashing with an empty space that once confronted the set of alluring purple orbs, and an array of gentle features - cold, but evidently humane. Grisly smeared lips twitched into a faint smile, pitying himself for actually convincing that he would get any help. Shadow of upper strands masking the motion of optics as his lower lip firmly pursed against the other, slender arms gripping at his side before he felt a touch. A light, and ginger touch. The particular hands of an unknown discreetly became the warmth of a figure by his side - small - the irises convulsed in jolt to the action of support, already maneuvering him through flocks of people as his pain struck sightings peered tiredly to the girl. So the money thing must've worked then. premising his bribe was the reason, he was still relieved that he would be able to go "home" without the old-man questioning where he had lurked off to, or, how he had gotten so grazed. After all, there was no doubt in his mind that he would be staying here for awhile.

Before his own insight portrayed they had disembarked into a small clinic - thankfully not busy - he commenced the speechless gaze of a nurse who ceased in all movement to their entrance, plainly shocked by his injuries before stumbling over and influencing him into her own support - the delicate hold of the previous girl slithering from his other arm as he barely glanced back to look at her - vanishing by the close of a door. The older woman precised him to sit on the white bed of the room, the clatter of tools resonating from the meager proximity - brash behaviour expressing no heed to his worry of an emblem but the injuries that outlined his body. "H-Hey wait!" a mild path of red flooded into his cheeks, uneased by the fact she had removed all of his upper "clothing" - bruised stomach the only regard as her optics alit in a wave of even more surprise - before meeting the red that tainted his hand. Without delay, he used the other to mask it over, fully aware she had already witnessed it.

"..I used to be in it.." he lied, "Once you leave that place its marking stays with you forever.. how do you think I got these injuries in the first place- ow!" the woman was not paying attention, and had already remarked a motion of long, flawlessly white band-aids to coil around the upper half of his chest. The concluding section to every wound that was already covered the last of them all. "We get a lot of people in here, Mister.. so don't worry about it. Just sit back, and rest. You won't be able to leave for awhile." she remarked while tending to the purple flesh, tinted by the fracture of rib bones - appreciatively not broken whole. "Huh!? I can't be in here for awhile! I'm fine so-" cleaved by vocalization once again, the lady forced him back onto the bed, his agonized nerves straining at the force of her thrust - lastly liberating from the room with such a careless looking smile.

The option of escape was labeled within his casually flowing thoughts, steering toward an open window that urged him to snake out of the bed, immediate confrontation to the floor enough to sit him back onto the soft structure as his arms reclined messily infront of his chest - a crease remarked along his evidently annoyed features. "Tch, this is stupid." spoken to himself, the sudden announce of another voice caused him to twist towards the door in utter befuddlement - comprehending that his own wounds were the cause of his lacking in senses as he without delay regonized the figure that stood before him. "For the sake of humanity?" his eyes boredly met hers, turning back towards the window as his bare and bandaged back only met her view - lengthy and still binded locks messily falling from his shoulder. "Ah.. I see. Well, if I were you, I'd take the money. After all, whats the point in bothering with the sake of humanity anymore?" a pause, "You must live a pretty boring life if thats the only thing you think of.. although, that stupid will is what saved me, so I guess I should appreicate it for now." sarcasm belched from his lips, observing the life that herded left and right outside his window - distant voices spanning to his ears, "You can go now, shorty.. I have nothing else to say to you." he waved her off like a nobody - when really he was probably in no position to act so cavalier.

From a raised eyebrow to a soft chuckle, the female's expressions varied at the man's comments. At his statement of her living a 'pretty boring life', she couldn't help but chuckle, wondering if it were true. The only thing she did was jobs and help others, but for her that was enough. She was happy with this so-called boring life.

The short haired individual bore her eyes into the back of the stranger's back and astonishment and hint of annoyance caked her features when he simply told her to leave, just like that. "You're welcome. That thanks was not necessary." Sarcasm dripped from her words as she decided to point out his lack of mannerisms and instead of obliging to what he had to say, the young slayer simply leaned against the door frame, "Shorty, huh? That sure is a nice way of treating someone who just saved your life." She raised her eyebrows and stared at the window through which the barbaric gentleman stared, wondering what was so interesting to look at that he couldn't look her in the eye while talking. "Since you're such a gentleman, it would be a pleasure to get to know the name of someone this kind." No matter how hard she tried, the sarcasm jumped into her words which was probably enough to convey what she viewed this man as.

"And You think doing something for the sake of humanity is not worth it, I'll just hold you up for this as a favor. I won't take your money, but I will remember this, and if we meet again, who knows? you might actually be useful to me." She stated with a shrug but truthfully, she was bluffing, why you ask? Simply because she wanted to get to know this intriguing individual who lacked such basic mannerisms. Her eyes lingered on his shoulder for a long time, clearly observing his tattoo which she knew belonged to a dark guild, but which one, that fact was still unknown to her. She recognized this  and embarked it as the same one she once saw on a small boy who claimed to have killed someone, simply because he was a dark mage.