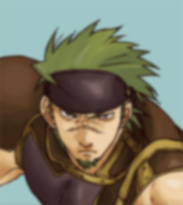 Whether there was peaceful silence or friendly chatter, it was broken when Ando burst into the guild hall. A determimed, vengeful expression on his face, he leapt inside and landed on a table, an audible crack heard from the wood below his feet. As Ando pointed around the room, his eyes were aglow with an orange tinge and smoldering ashes radiated off of his hands.

So, obviously, he was pissed.

"I demand to know where my sword is! I will not be separared from my glorious weapon!"

Simon heard shouting and decided to participate. The young man abandoned his drink and jumped up onto a table that was just a few tables in front of Ando. He pointed at him with all the seriousness he could muster and yelled in reply "I have no idea!"

Ando heard the first man's simple response and was about to suggest that may have been a mocking tone, but he didn't have time to. He heard the much calmer man approach and hopped down to meet him face to face. The stare was intense, as if sizing the man up.

"Yes! Do you know anything about it? Have you seen it?"

Ando seemed offended by the question, even if it was meant helpfully. 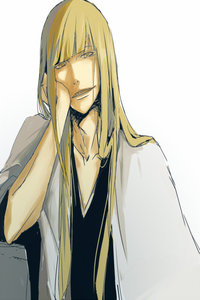 The Monkey Sage cringed in his gamers' chair when he heard the seemingly incessant yelling. He was too busy playing the latest shooting game on his gaming console to actually do anything, the bedroom reeking of marijuana.

However, Kenpachi was just about at his wits' end when the goddamn screaming just wouldn't stop. So he did as any person would: pounded the floor and swore a little.

However, the screaming and yelling would not stop, and Kenpachi had started hearing profanity. That was when he decided to actually do something about it. He paused the shooting game, took off the headphones which rested on his neck, and began walking towards where the commotion was.

When he had gotten to the crux, he saw one of his guildmates, and some douchebag facing her.

Kenpachi's vision was too blurry from smoking the weed to actually see who it was, but he had managed to hear the exact words that were being said.

"What's this shit about one of you losing his or her sword in here? I can't even play a video game without some bullcrap going on," the Monkey Sage said jokingly, bloodshot eyes wide open.

(OOC: I'm writing this post as if my intro thread already happened. If y'all wanna go and do a flashback or something, just ask.)
Ando

"This is no trivial matter! A warrior's sword is integral to their life!"

Ando didn't flinch for a moment, whether it be from Raz's guns or Ken's pounding. He stood his ground proudly, ready to throw down if needed. In fact, he seemed more like he wanted to! But, he contained himself as well, taking a deep breath and pondering a moment.

Simon was being ignored.

She gave her guild master a glare that could kill a damn dragon but due to him being her guild master (And around a hundred times stronger than her) she simply sighed and got up, instead turning her glare over to the. . .Sword Lover. . . Yeah she will call him that, "Lets go Sword Lover." She quickly got up and grabbed the man by the collar literally dragging him out of the building as she did so and just before she left through the door she gave her guild master one last glare for good measure, "That ought to show em!" She thought as if to validate herself.

Before Ando knew it, he was being dragged by the shirt collar outside by the girl. Hearing the new nickname, he quickly decided to counter once outside.

He made sure to say this as snarkily as possible, running off down the street and weaving between various alleyways. Eventually, he reached a small hole-in-the-wall, opening the door to reveal a single room. That was it.

"Here it is. I don't remember leaving it here, but everything I own is here. Only place I can think of."

He snatched her up by the collar just like he was grabbed, lifting her up.

"I meant this is my place! Not that I found my sword. "This is it" has different meanings, you know."

He put her down and started throwing stuff around in search of the sword. Of course, giving the reluctant companion false hope was fun, but he did need to get to finding it.

"Quickly, look in every corner!"

As the man pulled her she could feel her blood beginning to boil to a point where her skin was completely darkened and her stigmata ever present. As the man pulled her in her trigger finger itched enough that she accidentally fired a shot out the door with an audible ping once it hit the wall, and most unexpectedly a woman screaming, "OH SHIT!" Was all she yelled when she ran out to see if she had inadvertently killed someone.

Upon hearing the words, Ando stormed out the door and snatched up Razihel like a piece of cargo. He looked to see someone round a corner way in the distance with his very sword in hand!

Suddenly, the air grew hot and the ground cracked under them. A massive splash of molten earth propelled Ando forward through the air, holding Razihel safely. The ground he jumped from is ruined, scorched and pooling with magma.

When he lands, he's at the corner the girl turned at. She's off a little ways, still struggling to carry the heavy sword. She seems a bit small and fragile, with striking red hair. I point at her with my teeth gritting.

She smiled when she heard him yell that they needed to catch the woman and looked at Ando with a grin, "Follow me!" She never really reacted to the dash only noting that she would need to get some repairs done to the sidewalk area. Within moments she trained her eyes on the target as she was running and pulled out Damnation her black gun and aimed it at the woman, "Annnnnnd. . . BANG!" She fired a round towards her and a scream of pain resonated in the air along with the sound of a gun shot, but with the extra sounds of a bullet casing hitting the ground to her and Ando.

Ando was totally fine with the actions, just wanting his sword back. That was, until he realized something...

The bullet connected, she fell, and Razihel delivered the knockout blow. Ando was sprinting over almost immediately, stopping to check on whoever this girl was. The two of them seemed roughly the same age, and Ando looked at her with the concern of an old friend.

"Do you have any medical knowledge, something to help her? If you don't, get someone. Quickly!"

She looked at Ando with confusion and laughed, "She will be fine." She looked at the woman again and picked her up and looked at the leg, "Yeah she will be fine." She took out a small amount of gauze and wrapped the wound with it, "The biggest problem she will have is a headache and a bit of leg pain." She sighed and sat the girl down looking to the sidewalk where the thief had set the sword and picked it up, "Pffft. . . This thing is your grand sword. . ." She laughed, "And you think this is better than my guns? I could shoot holes in this thing that would shatter it with ease."

Ando carried the girl off to the Rune Knight, allowing him to bring her to safety for the time being.

"Thank you very much, sir."

Ando walked back and claimed his sword afterwards, silent for a little bit. Then, after a while of thinking, he spoke with the same swagger as back in the guild hall.

"Nothing can shatter my blade when it has been tempered by the molten earth below! I would crush your bullets, and your guns!"

He held the sword and stared his companion down, easily ready to test his warrior strength. However, he paused a moment and put his sword on his back.