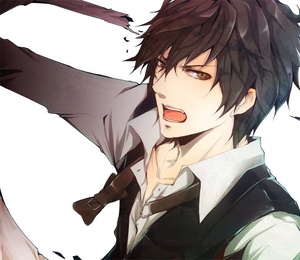 Player Requirements:
- Thread must be 40 posts long, 400 words per post.
- S - rank or higher, lower ranked mages are not allowed

Job Requirements:
- must save at least 20 people possessed by evil spirits by rolling the Strong monster dice ), after that you can try to roll for the Boss dice. Rolling the Boss before saving the 20 people will just cause the Demon Lich to appear before you; to taunt you and laugh at you briefly before disappearing to the center of town. In which case you have to roll for him again.

Optional Requirements (Good):
- Don't physical harm any of the possessed people to much
- Save at least 30 possessed villagers instead of 20, before trying for the boss

Optional Requirements (Evil):
- Instead of saving the possessed ones, kill them. Or harm them significantly. Either way works.
- Kill at least 30 possessed villagers instead of 20, before trying for the boss

Job Description:
The once sleepy town of Oak is now in chaos. People have fled the city and monsters and vicious apparitions reign supreme. In the center of the city, a powerful Demon has made his keep and is constantly summoning more spirits and demons from the other side in hopes of launching an attack on the other cities. In addition some powerful wayward spirits have managed to posses some civilians, giving them dark demonic powers. The only way to save these citizens is to render them unconscious.

Your mission is to free as many people as you can. The demon Boss will eventually come to you after you free enough civilians from his spell.

Enemies:
Weak: Hellfire Demons (B-Ranked)
They can use fire and darkness magic. They are quite strong and fast so don't take them lightly.

Normal Ice Wraiths (A-ranked)
Vengeful spirits adept in using darkness and ice magic. They have ways in instilling fear on their adversaries and corrupting their minds.

Strong Possessed Civilians (S-ranked)
They have super human strength and speed. Can use darkness and ice-make magic. You cannot inflict serious damage to them and you certainly can't kill them.

Boss Demon Lich (SS-ranked)
Possess extremely powerful dark magic which can not be consumed by slayers. Can use both range and melee attacks imbued with darkness magic. Legend has it that his entire existence is actually a shadow and that the shadows it casts upon the world are part of him...
Can withstand 20 A-ranked damages before being defeated.

Optional Reward:
- Ring of the Lich (a ring that allows the user to call upon the strength of the Demon Lich for 5 posts; although you won't have any civilians or other spirits to summon; you will gain an extra boost in damage output in the form of his SS Ranked Melee and Darkness Magic.)

The camera would drop dramatically over Oak Town, as Yugi would be shown already in a somewhat of a battle like stance. With a single 'clap' in front of himself flames would 'roar' to life around him, as in a slow-mo what looked like a hive of Ice-Wraiths; floating things of ice and darkness expanded in front of him like a net.

The slow-mo would end as a huge noise like a thousand crashing chandeliers hit the ground as Yugi leapt backward with marvelous reaction time, a huge blast of ice that the Wraiths had made a split second before, divebombing with their actual bodies.....the camera would rush back up to Yugi's face as he flew back in the air, his hands still clapped.

The camera would show Yugi punching the ground as he landed. A 'huge' sea of fire seemed to swim and materialize forward on the ground just as the wraiths were reforming. A close up of the pack of them reforming from their splash attack was shown, as their attention came just a moment too late.

Fire coated up the street, engulfing the group of wraiths as the camera showed this from the side as Yugi stood back to his feet, taking a step back as he looked up through the now streets, raging with literal flames as he watched the Ice Wraiths reach forward, screaming, melting, drifting apart into darkness. The street up ahead was an amazing sight, dancing with fire inplace of where the street would actually be, looking at this from a sidewalk would be amazing.

As the Ice Wraiths reached out in agony melting, a close up of Yugi was shown with a "!" above his head.

Turning slightly to the side, he saw a fleet of Oak Town citizens, only they looked really, really weird.

"Yugi! You've come back to uuuuuuuuuuuuuuuggggghhhhssss." one of the townspeople spoke, and Yugi recognized the voice, even though it was possessed, and layered with what seemed like hundreds of voices. "!!!!!" Yugi stood across from his grade school teacher, before he'd ever even had dreams of stealing the Book of Zeref. Memories came flooding back to Yugi from happier times, as he struggled to push them out and remained focused.

Many faces from the crowd of people, were those that Yugi had actually grown up with, went to school with, dances, plays, parties in Oak Town. Met up with at the library, girls fathers he'd dated. People who'd always said that he and his twin brother Lucien were nothing but trouble makers.

"Oh yes! The Lich has been so gracious............RAAAAAAAHAHAHAHA!" strings of darkness raised them into the air like puppet zombies, they arced up above Yugi about twenty feet in the air, hanging there almost lifelessly. "Welcome back to Oak, such a shame Lucien couldn't be here to bail you out again........or do they call him Count Sparrow these days, well I guess both of you can't be successful.... why he was always so proud of you I'll never know REEEEEHAHAHAHAHA!" the thing cackled from up above as a stonefaced Yugi looked on.

The member 'Yugi-Sempai' has done the following action : Dice Rolls

A gust of air went by the strings on the ground as a flash of fire seemed to roar outward once before disappearing in the blink of an eye. Yugi was shown, head tilting down; kneeling with a katana made completely of fire roaring in his hands at a finishing position.

Mid-air, the possessed civilians of Oak Town all looked rather surprised as they plummeted to the ground, Yugi had slashed through the strings of darkness holding them up faster than any of them could hope to have seen.

Surprisingly, the camera showed a closeup of Yugi headed 'away' from the large group of zombie like civilians, who behind him began crawling on houses, leaping across the street, on lamposts, over merchant carts--all in pursuit of Yugi, who moved much too fast for them, only having to step on the ground a few times too have gotten out of a good distance of them. As he ran shinobi style, skipping off the ground again; he was shown thinking a bit as the trail of fire from his Fire-Made katana followed his leaps.

Yugi again saw the crowd of possessed Oak Town residents, people he'd spent his whole pre-teen life trying to impress, what a silly thing it was when you got out of your own small town, to think your reputation in it mattered so much. Regardless of the fact he knew that Lich's were some of the first Elder Demons created by Zeref, and the most powerful, possibly more than he could handle, he would never leave his Hometown to be reduced to nothing more than a hellish playground for Demons.

The civilians, all combining their odd darkness magicks, probably cursed upon em by the damned Lich somewhere here, had their hands outheld toward Yugi, who seemed to get angry all at once and whirl toward them; the katana made of fire still in his hands would cut right through all the darkness magicks; and then expand down the street 100ft and 'sear' right into the stomachs of a huge bunch of the possessed civilians.

They fell to the floor, gripping their stomachs and chests in pain as after awhile; Yugi noticed a few civilians stand up and begin to run away screaming as if waking up from something. 'So...pain breaks the spell on their minds eh......'

"Guess I'm going to have to burn the darkness right outta your heads then!!!"

Yugi would hold the katana made completely of fire straight toward the camera, and look down the blade of it's roaring fires; visage turned slightly to the side. As a legion of Hellfire Demons and Ice Wraiths, appeared behind the zombie like civilians, growing in number as they seemed to pile up on top of one another.