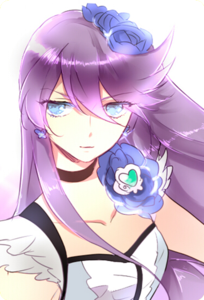 Blair hummed as she walked down the side walk, the world around her seems fairly... intense. Magnolia was a fairly hectic city, of course, one would except Blair to be used to such a hectic place considering she lived in Hargeon, one of the busiest cities due to it's exporting and loading dock. One of the few in Fiore.  Brushing her lilac hair behind her ear, she looked up at the large, marble castle before her. The Kardia Cathedral.

The client left specific instructions in their request, coming up as a short list of things. 1) They were not to be disturbed until the puppies were caught, 2) The person, or in this case persons, who take this mission should start at the Kardia Cathedral, for that is where they puppies ran away. 3) Do not harm the puppies. and lastly, 4) You can not keep any of the puppies.

As the sun shinned down, bouncing off the starling marble of the cathedral, giving it an odd, almost holy glow. "Probably part of the design," She giggled, turning her head and looking at the crowd of people rushing around like scattered ants as she began to keep an eye at for someone. As her white Lamia scale mark was perfectly visible from on her chest, it served as a marker to draw the attention of another one of Lamia scales low ranking additions. Ean Vanguard. Spoiler:
Ean wandered around Magnolia as he made his way towards the cathedral. He was rarely in the area, he was rarely anywhere other than Hargeon because of his weak body, but he had been to Magnolia a few times before with Kihia and a few other of his guildmates so he knew the major landmarks so getting to the cathedral alone wasn’t an issue.

Sola rested nicely, wrapped around his neck as he let his little head poke around and move to look one way or the other. She may not be able to speak but was able to understand human speech well, so she was probably trying to help with the job.

Ean Suddenly felt a tug on his neck as Sola started let out a squeaking bark. Ean, naturally small and weak, was pulled by the pipe fox as he was dragged to a dumpster in the alleyway. “Hey now Sola, calm down,” Ean whined as he heard something scurrying around the trash container. Ean looked in with curiosity as he saw a small dog head pop out of the trash can with a fish in his mouth. Ean found the irony humorous although his emotionless poker face didn’t show it as he checked the photo of the puppies he was supposed to find, this was definitely one of them. Ean didn’t hesitate as he put his hands in god knows what and pulled the small puppy out of the trash, which immediately licked him on the nose, to which Sola took as a challenge and started barking in that weak squeaking manner he does. Ean put the puppy in his arms as if he was holding a football before giving his beloved pipe fox a reminding pet about who his partner was and heading off back towards the cathedral.

Immediately as Blair was looking around a filthy puppy would appear before her with a foolish grin on his face a bark. “I found one on my way over here,” Ean said as he did his usual popping out of nowhere. “You’re Blair, correct?” Ean asked as he politely brought the puppy back down to his chest.

Sola let out a friendly chirp and, like so many others, she jumped onto Ean’s partner and burying himself within her clothing, slithering around inside in a playful manner before coming out of the collar of her dress and wrapping around her neck and giving her a peck on the nose in friendly greeting. Sola had a ‘bad’ habit of getting excited around good people, she also had a good vibe about who was good and who was bad, typically steering Ean out of trouble and towards nicer people. Sometimes Ean thought she was just dirty and trying to satisfy his needs as a man.

Her eyes opened up with shock as something slithered into her dress. "Hello there!" She squeaked, twirling around and trying to shake out what ever it was in her dress. A gentlemen had approached her, asking her name right before the creature slithered in. "Yeah, That's meEEE" Her voice going an octave higher as the creatures head peaked out from the collar of her dress, she looked down out it, letting out a sigh, she took a step back, and leaned her back onto the cathedral, "Why," She muttered, holding her head with her hand and looking down just to see another animal. A puppy.

"You did find one!" She spoke, petting the creatures head, currently still in her chest, and bending down to look at the puppy. "Well, that's one down, only six more to go." She spoke, looking up at the man and giving a smile. "You must be Ean," She spoke, still bent over as she reached up, offering a handshake, and hoping for the creature between her breasts finally slither out.
--------------------------

Ean put a hand to up near Sola and flicked his wrist as a signal to hop onto his arm, to which the pipe fox complied and wrapped himself around her master’s wrist. “I apologize. Sola gets excited when she meets someone new,” Ean replied. It was a regular thing and sometimes it worked out better than others. At least Miss Blair didn’t explode on him. It happened once or twice and it wasn’t the most pleasant of things to have a typically nice lady shouting at you. Nice ladies are scary when their angry. Perhaps this was because any pent up aggression and disdain from previous, less pleasant encounters, built up inside them as they tried to maintain some image of perfection and a lady-like demeanor. It wasn’t something Ean understood and probably never would.

Ean gave the woman a nod. “Do you happen to have a leash or something?” He asked. Ean didn’t think to carry one and now that he thought about it they’d probably need something to carry the puppies in after they found two or three more of them.

"Nope," Blair responded, picking up the puppy and beginning to make her way to the other end of the Cathedral. "No leash, but i have arms. And you do too," She spoke, smiling as she began to search for other animals. The one in her arms was fairly happy, wagging its tail and barking with joy as it looked up at her, licking her chin.

"The other dogs are here somewhere," She spoke, shaking her head as she stopped walking, debating whether she should keep walking behind the Cathedral, or just walk back to the other side and look somewhere else. It was then the dog started to squirm from her arms, and bark. As she placed him on the ground, he charged forward, darting to a trashcan behind a shop next to the Cathedral

"This is no time for snacks my friend," She spoke, chasing after the dog and stopping closely behind him. It was then she could sense something, joy. Immense joy. "It's too strong for just one animal..." She spoke, waling up, and moving the Trashcan. It was then a dob jumped up, latching onto Blair's chest and pushing her onto her butt.
--------------------------

Ean didn’t get surprised by his guild mates clumsiness. It even showed on his face, which was rare that his unmoving poker face actually represented something. Well, he wasn’t showing anything but it would seem like he was showing a great deal. She gave that sort of vibe that she made mistakes on multiple occasions. She was a good person, but still needed to work on coordinating herself.

Ean followed with a casual walk the entire time and didn’t get too worked up over it. “It seems two puppies is your limit. I’m not going to be able to carry five,” Ean commented, partially as a joke about her little fiasco but quite seriously as he couldn’t handle five puppies at once. Even if she was clumsy, Ean was downright weak. It was rare for him to even leave Hargeon because of his health. He had been feeling pretty good recently though so he decided to buck up and get out of Hargeon for a while.

As Blair began to walk to towards the sidewalk, Ean began to speak about the difficulties given to them from not having any leashes. "Hm, you can carry at least two, right?" she spoke,  partially joking as she stuck out her tongue, dogs still in her hands. "I know how to handle them and bundle them up once we get about four or five of them." She then let out a giggle, and stepped onto the side walk before her. "So, the next dog," Blair spoke, cracking her neck with the puppies still in her arms.

Looking down at them, she put one of them on the ground, "Okay buddy, where are the others?" The dog let out a yelp, and charged, running full speed ahead of her. "I think he got something!" She spoke, clapping her hands together, somehow not harming the dog. Holding the dog with both arms, almost like a hug as she brought it up to her chest, she began to follow after its sibling.
--------------------------