There was such a lively atmosphere to the place and the redhead had to smile as she entered the guild hall for the first time. She had heard so many rumours about Fairy Tail on her journey, many involving explosions and fighting but rather than put her off, it had only made her more eager to join. Ashaiya was a believer in living life to the fullest and as a member of Fairy Tail, she knew she could do just that. She had spent the past year drifting from place to place, exploring every village and town that she had come across, exploring what she could of Fiore. It was a tradition of her family, with all children leaving home to travel the world at the age of sixteen. Her four older brothers had left when they had turned sixteen and it had been the same for her. As fun as the year had been, it had been a lonely one and the teenager had soon started to miss the companionship of her family, which was what had brought her to the guild. Well...that and.....

A rumble from her stomach brought Ashaiya back to the present but thankfully there was so much noise around her that she doubted anyone had heard her. All she could do was chuckle and walk forwards, her large green eyes watching the members of the guild as they went about their business. She had to smile as a couple of the male members started to fight for no reason at all, it reminded her of her brothers, they had been like that all the time when she was a child. She had never stepped in or anything, all she had done was just sit and watch, laughing all the while. Good times.

"I wonder who I have to talk......CRAP!," she said, cutting herself off as a chair went spiralling towards her. Ashaiya ducked swiftly, with the chair flying over her head and breaking one of the windows."Complete chaos," she said to herself afterwards, laughing.
Janet Cinderfeild

Apollo is looking at his book that he was reading. Though then he heard the doors open.  As he looked up about haired girl was a standing in the doorway. "Huh another new member" he says to himself.  he got up and set his book down. Then went after He had straightened His tie he started to make his way toward the red haired girl.  Though he couldn't get to her without going through the fight but this was inevitable,  such as life in this guild.  As he walked through the fight he threw a small shield surrounding his body and just walked through the fight.  Cups and punches hit his shields but not one got through.  He then saw a chair whiz by him. "Aww man that the..!" He saw the Chair was flying towards the red haired girl.  But she dodged it just in time.  "Well good to know she is quick enough to survive here"  He said as he approached her. 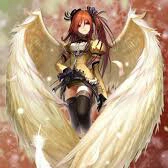