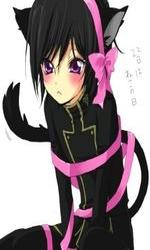 Yukito takes one of his usual walks, but stops at a restaurant feeling a bit hungry.  He walks inside, besides the smell of food, he notices a familiar looking exceed...until it hits him that its Daiko's.  He starts frantically looking for him, forgetting his hunger, he very quickly spots him. "Gosh...what should i do?", he mumbles to himself, while looking at him, feeling suddenly nervous to meet his biggest idol.  He slaps himself and gets the courage to walk up to him, but can only muster a weak hello.
Daiko

Daiko... suddenly finds himself in a restaurant. Glancing around confused, he shrugs, then looks at the noodles in front of him. He picks up the bowl, and swallows the contents whole. The exceed was on the other side of the table, vigorously eating fish. "Slow down.. You'll choke on your food..." Just as the slayer had spoken, the exceed begins to choke on his food, causing Daiko to roll his eyes. He walks over to the cat, and smacks him on the back of the head, causing him to spit up an entire fish bone. The mage stared, amazed. Suddenly, some strange guy poked him on the back, saying hello as if he were scared.

He looks down, embarrassed and then realizes something..."You know i'm a guy?", he tilts his head. After a bit he starts laughing "Sorry, if that sounds strange...most people always assume i'm a girl, but I should of known you'd know." He bows a bit, "I'm Yukito Hara...a-and..i'm just a really big fan of yours", he looks down feeling embarrassed again.
Daiko

Yukito looks down, his kitty ears drooping over his eyes a bit, feeling completely crushed.  "A-ah...I-I don't want to be...identified as a girl.....i-it just..kind of...happens..I guess" , he feels dumb for trying to explain, so he sooner leaves not wanting to bother him anymore."I-It was...nice to meet you...I'll be taking m-my leave n-now"
Daiko

He looks at him confused, but still a little hurt. He wants to cry from earlier, but holds it in, in front of Mr. Daiko. Wh-What are you doing...didn't you want to get away from m-me?", he chokes a little on the last word, still looking down. "I-Ive also never been to an amusement park, my brother has never taken me to one...what is cotton candy?"
« View previous topic · View next topic »