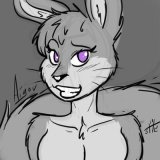 Aigou wagged her tail as she walked down the street, naked and decked out in bells. Bracelets on each wrist, a choker necklace, bells tied to her tail in several spots, and her ears. She was jingling with each movement she made and she loved it, though the people around her might not.

Aigou glanced over as she passed by an alley, stopping as she noticed something shiny. Most people wouldn't go into a shady alley unless absolutely necessary, let alone for some shiny object. But she was not most people. She quickly turned down the alley without hesitation and bent down to pick up whatever it was. She pouted as she stared at the object on the ground, and started to straighten up.

The cabbit never would get a chance to use that spell, as the man in the middle would have an ungodly large hand grab him around the top of his skull before slamming him to the side, first into the two on the left, then the one on the right before the hand would let go, letting him fall to join his friends. All four men rolled over, ready to hop up and attack their assailant, but all four stopped in utter shock at the sight before them.

Standing at seven foot two, and weighing well over four hundred pounds, without the heavy steel armor and weapon in his right hand. His beard and hair blew in the wind, looking like fire as he stood there, with a dead body over one shoulder, and the mark of the rune knights emblazoned boldly on his right shoulder. Add the blood, and the expression of pure rage, and Kaido was likely a terrifying sight.

Aigou stopped short from using her magic as her attackers were attacked themselves, by a huge armoured, bloody, enraged man.  He already had a dead body over his shoulder and it looked like he was a rune knight by his tattoo. But still, her instincts kicked in and she shook in terror even as her attackers ran off.

Aigou mewled weakly, sounding like a newborn kitten, as her ears pinned themselves to her head, tail tucking between her legs. Her eyes were wide and she probably looked terrified, though she tried to hide it by saying, "T-thanks b-but I c-couldve handled it m-myself!" She didn't sound too confident, even without her stuttering and stumbling.

Kaido turned to look at the woman curiously. And if he had ears like hers, they would have fallen back. A rabbit girl. Lovely. Instantly, dark memories flooded back to Kaido, making him suddenly very uncomfortable. Why did it have to be a bunny? He hated bunnies....

Aigou smiled a little at the large man as he looked her over, relaxing a little tiny bit as he spoke. A gentleman, eh? Gentlemen were always fun to toy with, though the size of this man would deter any woman who would want to toy with him. Her tail flicked with a jangle and she crossed her arms, doing her own once over of this giant man. Despite her innate fear of large people, they tended to fascinate her for some reason. Especially the men for...reasons..

Aigou stared at his hand for a second before wrapping her tiny paw around his thumb and shaking his hand that way. He could probably feel her pawpads rubbing against his finger. "My name's Aigou. Don't have a last name. I met a rune knight a little while back. His name was Kodai." she replied, leaving out the bit about their deal.