Kyll stood there. Her feet didn't move. She was supposed to follow through this with out magic, but prolonged periods of time when she was dealing with heights. Scared her to death. Mainly because with out her magic she would pretty much have no control over what would happen. She felt as if her feet had been nailed to the ground. Her legs were stiff like stone. "You know what?" Kyll said looking at the opposite direction. "How about we call this a pass..." 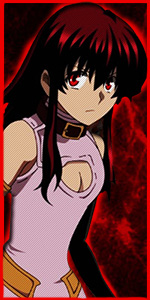 Kiba heard Kyll scream and rushed to the edge, seeing her starting to fall, kiba jumps off the edge. As he falls Kiba uses his hand to keep track of the wall, almost free falling towards Kyll. he grabs the wall just as he comes with in reach of Kyll, grabbing on of her hands in the process, the wrenching of the sudden stop sends daggers of pain though his shoulder and arm.

Kiba stopped when Kyll giggled, giving here look, "I'm not stuck in our ways, hell my Cousins and sisters all used tools or team work to get across." He starts climbing steps again. "My father was mad as hell when i just jumped, Said that we have brains and that i should use mine." Kiba shakes his head, "Thing is i cleared all the trials in a fraction of the time it took anyone else. Aoi said she had not seen someone so foolish to do the things i did. I told her that sometime doing what is harder can give better rewards." Kiba stops again. "And you know Kyll you should smile more, i don't know what happened to you but your still here." Kiba turns and climbs the last 20 stairs, "And Welcome the the Yukiko Shrine is i remember it."

"My mother called it the Soul Destroyer in her journals. My mother's family was concerned about her departure to Era when she was to marry my father. So she mentioned how my grandfather warned my mother of the Soul Destroyer. A sword only meant to react to our healing magic." Kyll glared at it. "Holy Butterfly makes multitudes of butterflies surround our friends and foes alike. Binds demons. Heals injuries. Exorcise spirits. The Wei family was known for their priestesses with glowing eyes. My mother left for Era. She wanted to heal rune knights. Then my father, a noble who loved his research, experimented on my mother with an imp. The Wish Faerie. Long story short, the creature reacted with my mother's magic." Kyll gripped her fist as she flashed back to seeing the creature that she asked to survive with. "The creature feeds on human souls through granting three wishes. Mainly because the greediest souls are the sweetest... So the demons say. Wish Faeries are the lowest on the totem pole. They are delicacies that demons feed on. Each wish the imp grows. My mother made two wishes..." Kyll looked over at Kiba and kept a serious look on her face.

"First, she wanted me to never understand love again. So for a while after I had left my ex husband, I had an illness where I would have nosebleeds when I came in contact with anything like that feeling." Kyll clenched her mouth shut. She paused and started to unravel her sleeveless kimono top. She folded each piece of cloth and placed it to the side. "Second, she wanted me to have a magic as strong as the man she truly loved, while she was married to my father." She reached behind her neck. "Her last wish was to have me destroy her, but she was interrupted by someone. However, my Heavenly Body Magic was reacting with my body. Rejecting me. I was about to spontaneously combust. Before my mother died and all the imps with her, one of them came to me. I wished to be saved. I disappeared for a while. When I awoke, it was weeks, maybe months, when Einrich found me. I don't know. All I knew was I was fine. However, I wasn't..." She placed her fingers on the zipper behind her neck.

"I was a carrier. The imp was reacting to my Holy Butterfly magic. Sealing it away. Word got out that I was a host, so Frederick of Sabertooth now, captured me. Tortured me. Unsealed the wish faerie, bringing out the queen once again. My mother, Master Zeno, Zenshin, Akryn, Geno, and Jay all came to rescue me. Marick was there too. I don't know who pieced my mother back together, but it was possible. She purified the blade changing it to a method for barbaric spiritual healing. I was saved. I only had two scars." She unzipped the back of her body suit to reveal a black sports bra underneath. On her shoulder blades were two scars vertical. "The wish queen's wings are that of a skeleton. Bone sharp like swords and spears. I almost impaled my own guild master when the queen took over. In the end, the blade dissipated only leaving the hilt."
_____________________________________________________________________________________