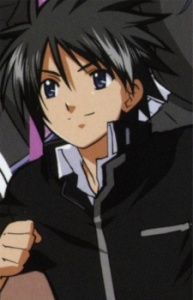 Maltheus just came from a long exhausting day in a line that seemed as if it would last for days. The good thing that came of it was that he got a passport at least. He knew he was going to have to join a guild sooner or later, so he decided that he should join Fairy Tail. Sure, most talked of how destructive they were, but also of how they seemed like a real family.  Hopefully Fairy Tail welcomed Celestial spirits as well. If they rejected them, Maltheus would unfortunately have to leave. He would never ditch his keys for a guild. Well, not like they wouldn't like his spirits anyway Maltheus thought. who could hate a humanoid dragon, an Ice-Make swordsmen, a scythe-wielding Thunder Mage, and a beautiful gravity-changer? As Maltheus thought about the guild, he realized he had just arrived at Magnolia Town.

Simon with eyes like a hawk... Completely failed to notice a new person walking into the guild. He was distracted by other important things. Important things were included but not limited to: reading newspaper clippings about himself and... not much else. Up in his make shift nest in the guild ceiling the phoenix mage was building up his own ego reliving some of his old greatest moments. Was it normal for a 15 year old to remissness over old times? No not at all. But Simon didn't care much about what was normal and what was not. As he examined one large piece of paper the boy read "Local Fairy Tail mage Simon Baggons suffered a violent stab wound in the gut inflicted by dark mage during the "Daybreak" incident. When asked for a comment he replied "It hurt and was really dang cold. Don't worry I've suffered worse." He grimaced at the piece of paper and set it down. That there was not a pleasant memory. Not pleasant at all. Not pleasant enough to shake him from his trance to see a small hubub down below.

Heero sat in the Guild Hall drinking what looked like a gigantic milkshake. With a black hoodie on, and sunglasses, no shirt underneath showing off his abs.

As he sat at the table, he felt someone tap his shoulder. As he turned, and looked back, he saw Garfield standing on the table drinking his milkshake.

The guild was packed with more than 100 wizards and humans coming to and fro to request jobs from Fairy Tail as Heero got an 'irritated' mark over his head. However, he spotted something curious.

The 21 year old saw some kid asking around the crowd, wanting to join the Guild it seemed. He was pretty excited and Heero liked his spirit. Adjusting his shades with one hand with a fanged smile he would see how the young wizard handled himself alone for now.

Through the crowd, he saw Simon from the 2nd floor jump down and shapeshift into a small bird made of blue fire, in a streak he flapped over the kid asking him a few questions. Ken walked over calmly as Heero watched, reaching for his bag of chips but instead facepalming Garfield as his Exceed had already begun on the bag of chips.

"Damnit, I can't look away for a second!"

"I thought you already knew that!" Garfield continued to munch on the bag of chips as he looked towards the kid, swishing his tail as he stood on the table. "Well, it's the middle of summer....I wonder if Chikane is even around. As an Ace you may have to step in at some point.....are you even listen---" as the camera shifted back to Heero he was asleep with an anime sleep bubble on his nose, mouth open fang visible.

Garfield facepalmed with both hands and leaped off of a few heads, cat style! In Fairy Tail and landed on Ken's shoulder.

"This kid is a wizard huh?" Garfield asked Ken as he stood on his shoulder, an orange paw on Ken's black hair. "Well, go ahead and use some magic. Look around you, don't be shy!"

As the kid would look around he would see cards floating in the air, drinks toasting themselves as they floated. A wizard doing magical art drawing, laughter and pizza, girls wearing barely anything. Truly Fairy Tail in the middle of summer. Heero eventually woke up and wandered over towards the new kid just after Garfield had finished speaking.