Kaligos from D to C rank

Kaligos from D to C rank 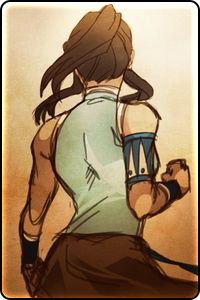 Ebony's eyes started to become heavy as she sat on a chair, watching the Guild rampage around her. Something landed on her shoulder, mumbling a few words she didn't understand. "Yeah, yeah yeah.." she sighed, holding her hand to her head. WAKE UP!!!! KALI CAN TAKE HIS EXAM!!!

She jumped five feet in the air, giving an evil stare to the blue creature that now hovered in air in front of her.
"Wait, Kali can have his C rank exam?!"
Ebony's eyes widened as she lifted her hand in the air, "HEY KALI! Meet me at the Serene Cliff in, like, ten minutes. It's time to take your exam."

Kaligos had caused a lot of fuss it seemed. It was a few days after he had completed his last mission, and now it seemed like everyone was having a bit of a fuss when it came to him. Kaligos hadn't even realized that he had qualified for his examination at first which was shocking to say the least. However Ebony turning around and racing off towards the cliff without more then a word was a little confusing.

Kaligos finished his current drink, the familiar taste of cranberry juice filling his mouth and making him more then happy. Before taking a bite out of the ceramic clay that the juice had been served in. Eating the clay, and getting up from his seat he left the noisy crowd. Today was an important step in Kaligos's life and being a fairy tail wizard.

His mind raced as to what his exam would be, was he going to be slaying some kind of monster? unlikely the cliff wasn't exactly far from town but that would still be awesome. He didn't really want to have fight Ebony she seemed so young, and he hated the idea of hitting a woman that was younger then him, or really any member of Fairy Tail.

By the time Kaligos arrived at the cliff, the only thing he was absolutely sure about was that he didn't want there to be any kind of written exam. Mathematical he could do, his father had taught him plenty of math. But so far only two people knew Kaligos's darkest secret. His father had never taught him to read or write. Arriving at the summit he looked over Magnolia, a town which he had embraced as his home even if his appartement was criminally small.

"So... what happens next?" Kaligos had never taken an exam before. His dragon had tested him, but those had usually involved rather sudden tests of endurance.

~"Do you remember how to land?" "What?" His father's claw moved quickly in a powerful flick, sending a five year old Kaligos off of the edge of a cliff, towards the rather distant ground below "Try to land on the soft patches!"~

Ebony sat the edge of the Cliff, her legs crossed, hovering in the air as she closed her eyes. She heard footsteps behind her as she opened them, standing on two feet before turning to him.

"So... what happens next?" Kaligos asked.
Ebony grinned, "You seem eager~ That's a good thing. Well."
She walked around him, looking into the air as she saw a gaggle of geese descend among the grass. It is like they came to watch.

"Well Kali, all you have to do is. Fight me."
She walked a couple of meters from him, shooing the geese towards the forest on the edge of the Serene Cliffs.

Kaligos took a step back his hand going to his mouth when Ebony told him that he would have to fight her at this point. In truth this was rather sudden, and he didn't really like the idea of jumping into combat against someone like her. She was the master of Fairy Tail, and more then that she was younger then him!

Kaligos shook his head. "Absolutely not, I refuse to fight against the guild." Kaligos had partaken in brawls before, but he had never used his stone body, or any of his spells in those combats. He had never gone against a member of Fairy Tail. They were the only kin that Kaligos had left, and while they were a rowdy bunch and Kaligos wasn't always nice to everyone (Cough, Simon Cough) he still never went all out against a guild member before.

"Absolutely not, I refuse to fight against the guild."
Ebony's mouth widened, almost dropped on the floor as he said this.
"You say whaaa?"

"It's not that I don't think you would be able to take it, from what i hear you are the strongest member of the guild, but... well... your still a member of the guild. So I have to at least attempt to decline this battle. There has to be another way." Kaligos said lightly stepping backwards. Ebony grinned, almost laughing.

"There will be times when you do not want to fight. This is one of those times. Think of me as an enemy, because if you do not fight me, you will fail this exam. " Her eyes met his. She gave away no expression, just a cold stare that told him she was serious.

"Now come ooon! Fight me or I'll have the first attack. And trust me, that almost never happens when battling some enemy." She grinned, a red aura covering her as she began to hover mid-air.

Kaligos let out a rather annoyed sigh. The last thing he wanted to do was fight a member of his guild. Then again Ebony was making this choice. Letting out a sigh he leaned down, and picked up a rock from the ground. rolling it around his palm he thought it over for a second, holding onto the rock. It was apparent then that he would have to fight against a member of Fairy Tail, at least this once.

Rolling his eyes for a moment he took the rock and bit into it. Dusting his hands after he had finished his small meal. "I am gonna be sore tomorrow." Kaligos couldn't actually beat Ebony, there was no way he would stand up against someone like that, but at the same time, he had to give it his best chance. and there was one advantage he had. They were in a very rock filled area. If she had wanted to challenge him she could easily have picked a terrain where he would have had a disadvantage.

Kaligos put his center of gravity lower to the ground crouching slightly. His eyes were assessing his threat for a moment, He was trying to think through his actions was never his strongest suite. Kaligos had a habit of loosing himself in combat, and he had a fear that if that happened here he wouldn't be able to pass this exam. So he was doing his best to scale back his dragon slayer senses. Usually he would charge in and take the first shot no problem, but this time he was stuck. It didn't matter that she was challenging him, she was their guild leader, and a member of fairy tail.

"I am gonna be sore tomorrow."
Ebony laughed as he ate the rock, tilting her curiously. Ah yes. I almost forgot he is the Earth Dragon slayer. This will be interesting to see if he is worthy~ She readied her stance, arms in the air as she watched him get ready. He's taking his time... Her mind wondered as a butterfly passed her. Pretty...

A voice interrupted her thoughts. "No this won't work... your gonna have to hit me first." He said as his body relaxed. Ebony laughed, both confused yet amused at the same time. She lunged forward, using her super light powered speed to instantly strike Kaligos in the face with her fist as she smiled, quickly moving back to her old position. "Come on Kali, this is your exam. Make it interesting. Look at the earth around you." She crossed her arms, still hovering in the air.

Kaligos staggered backwards for a moment he had hardily seen the punch being thrown but he sure as hell had felt it. In truth punches weren't usually that effective against Kaligos, too actually be hit and to feel it was a new if slightly frightening experience but at the same time that single punch had pushed aside all the inhibitions that he had so far been clinging too. Suddenly Kaligos wanted nothing more but to return the favor.

Kaligos made his move for a head on charge, he doubted that he was fast enough to catch her at her full on speed, but damned if he wasn't going to try it. His arms glowed for a moment with an odd green light, and when they stopped his for arms and hands were replaced with green crystaline claws, Kaligos leaped from the ground as hard as he could trying his hardest to return the favor and give Ebony a fist of rocks to the face.