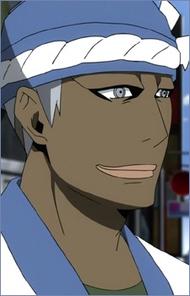 Phase one's finally done, and she wants to hear my plans? I guess there's no harm, as she helped me see the first part through he thought while happily turning the rather curious mage who wanted to hear his mission. "I plan on toppling the Magic Council through five phases, and you just helped me complete the first one, along with that other mage" he said cheerily, grateful for her help through the job. He made sure to say it quietly and up close to her, fearing that a Rune Knight or civilian may overhear his talk of rebellion. "With the completion of part one, it has become significantly more difficult to stop the plan that I've created for the span of five years. You see, I don't particularly agree with the kind of limits that the council has put on mages, though they turn around and use that very power for things that many would consider tyrannical. So, I plotted for five long years for this very moment, and now, well, now I'm recruiting, you see. Although you refrain from killing, it's easy to see you don't belong to the legal side of things, or you would've run to tell the guard. So? Will you join me?" he asked, extending his hand. Now that phase one was over, he needed to recruit powerful allies, and that all began with a simple handshake.
_____________________________________________________________________________________

"I know that, I'm just giving them a little push in the right direction" he said, listening to her offer. She was obviously stronger than he was, but he was determined, if cutting a major artery or two was what she wanted as proof of his power, than so be it. The woman didn't know it, but he knew all the ins and outs of the body, how to inflict the most pain, where to attack for a quick death from massive blood loss, and where the general weak spots were. Out of the air, he took the weapon that he'd just finished using on their job, his ethereal sword that boosted his speed significantly while at the same time, using his eye spell, sanguine eyes to slow down the perception of the world around him. All of that combined with the fact that he was so close allowed him to swing his sword but stop as soon as it nearly scratched the common carotid artery in her neck. "Shall we start this deadly tango of magic and steel, then?" he said, a look of determination washing over his face.
_____________________________________________________________________________________

She didn't take any second to think about her move, and Shaku didn't expect her to. His scarlet eyes were already ready to predict the path of a sloppy punch, but what he didnt see coming was the miniature earthquake she caused after the attempted punch that he simply tilted his head to avoid. There was a light and then an explosion. Before he knew it, he was flying through the air at quite a fast speed, disoriented and confused what just happened, he shook his head. Shaku suddenly remembered and turned to re-position his body mid air so that he was facing down. With a sigh, he stuck his sword into the ground with both hands, hard, jerking his whole body to the side and eventually slowing him to a stop. Powerful... he thought as he started sprinting towards her. A ball of light was shot at him, but it seemed a bit slow when seen through his eyes, and coupled with his sword's speed boost, it was simple enough to sidestep to dodge it. When it was close enough, Shaku jumped with a clockwise spin and launched his sword at her in midair, as he didn't really have much against air enemies. While it was in midair, he held his hand up and summoned his black revolver to it, followed by three shots at the bottom of the hilt of the blade to speed it up more than it was already going.
_____________________________________________________________________________________

Kyll witnessed his attack. There seemed to be something in common with the mission they just left. Kyll wanted to test this theory out further. She wanted to keep one of her spells aside for her attack. Kyll then she spotted a sword heading to her at an increased speed. She quickly moved her body to the side. A crimson ribbon appeared as she barely made it through her dodge. Kyll put a hand on her cheek then moved the hand down to her sight. The white glove was stained with a little blood. Kyll shook her head and giggled. Her laughter was a sign to show that he seemed a bit more powerful than when they were together during the job. Kyll held her arms to her side. A yellow circle with a star in the center appeard. Kyll shifted her body forward and then ten heavenly beams of light came out of the circle and headed straight for Shaku at varying speeds. She then zoomed in closer on Shaku and sent an upper cut straight for his chin.
_____________________________________________________________________________________

His sword nearly hit her dead on, but somehow ended up only leaving a decently sized cut on her face, causing her to let out a laugh, for some reason. She seemed like she was having a good time, and he was too. This woman was definitely strong, it had been a while since he was last sent flying like that, and now she charges him from the air with beams of light being fired at him, fantastic. Unfortunately, there was no time to just stop and admire the light show that was being put on, as he had a deal to seal. Focusing on one of the lights, he fired, and again, and again. *Click* he reloaded. He was able to shoot seven of them out of the sky before the final three hit the ground around him simultaneously, causing an explosion and a cloud of smoke to daze and confuse him as well as damage him a bit. Shaku quickly got out of his daze only to see the girl flying towards him quickly, gunning for his face. If she wanted it, she could have it. In a big step forward after bending his body back a bit, he launched his head towards her, attempting to slam both of their craniums together like newton balls.
_____________________________________________________________________________________

Shaku felt the force of the magic as it hit him head on like a truck, she was so quick in the air, but when he immobilized her for a second, she pushed him back a few feet. It wasn't painful or anything, not that he would feel it unless it was something major, like a severed limb. Actually, it was more like a shove backward by an invisible force, and he wasn't having that. "Hey Shaku, you have anything new you want to show me?" she said tauntingly, not even knowing how right she was. "Yes, I do actually. I'll take you down with my favorite weapon" he said, his eyes gleaming with determination and his mouth curved upwards in a smirk as he held his right arm out, like he was holding a pole at her. Then, in a split second, Ventaurus appeared. Its blade was as sharp as ever, being curved outwards towards his left side as he held it out with a single hand, giving the impression that it was either light, or he was very strong. Chaos shred he thought as the invisible field was instantaneously created with no sign of such a thing even happening. From a viewer's perspective, he had just conjured a melee weapon to fight with at long range, so logic dictated that she'd be expecting him to rush her. But oh no, she was too fast, instead he would end it in a single cleave that she couldn't be expecting. Finally, action, he raised his scythe up and swung it downwards, diagnolly towards his left side. A slice would instantly appear right in range of the woman as if he had just sent a cut at her from proper range. She was fast, but could she avoid something so unexpected? I'm starting to be thankful for not using chaos shred against the Vulcans he thought as he awaited her next move, ready to block with all his might.
_____________________________________________________________________________________

Kyll's aura disappeared. "Well..." Kyll smiled. "Even though attacking the Magic Council is a dumb idea. I'll follow you. Mind you I'm risking getting kicked out of my guild for doing something so absurd and stupid." Kyll giggled. "But it's not like the other's would do something so idiotic as well." Kyll shook her head. "I particularly have a small beef with the 4th Chair, Harland. So beating him is sort of a goal." Kyll smiled. "Besides I think it's wrong that a group of people have access to such strong weaponry. They could drop that cannon on anyone just because of some threat. It's not right." Kyll looked at her hands. The blood was immediately gone. She took a glove off and looked at her hand. There was no scar. "Looks like I will be of use to many other people." She opened her eyes. "All I ask in return is for a tiny bit of protection with the time is right." She smiled and then waved him off. "When the time comes you know where to find me." She then walked away.