An Iser Walks Into A Bar... 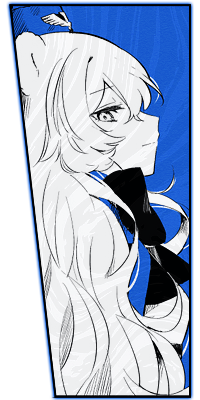 An Iser Walks Into A Bar...

If there’s one thing that Deva knows how to do, its make an entrance.

It didn’t take long for her to catch wind of a new player on the field, one who had quickly made a name for themselves. Having left Iceberg after the formation of the Ironheart Pack due to the blatant showing of weakness and dishonor that she did not think possible in her people, it was only a natural move that she emigrates to Fiore. Since then, however, it’s been a struggle to make it by. Sure there have been jobs here and there, but without the backing of a guild finding her spot in the world was proven to be a daunting task. So when the news of Lavanitir finally reached her, she figured who better to make friends with than the people crazy enough to take over a town by force.

That’s strength right there, power. And Deva values that over anything. So, waltzing into the guild hall she took the opportunity to display her own. Where most would knock, Deva blew the door off the hinges. With a quick execution of one of her arts, a loud boom would be heard echoing through the hall. Walking in and looking at the mess she just caused, she jokingly made a remark. “Oops.”

Expecting at least one pair of eyes on her, she continued. “I hear this is the house of calamity. Do you have room for one more?”
Trinity 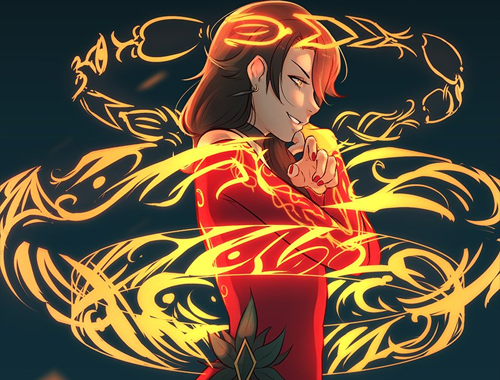 Thana had settled in quite nicely to the role of guildmaster. Ever since her resurrection, life had been rather grand. It was so… freeing... to no longer have to share a body with the simpering Trinity or the constant ball of nerves and paranoia that was Aeron. True, the Warlord of Mania was technically in hiding seeing as how she was supposed to be dead. As such, she couldn’t exactly go out in public in her true form, lest rumors reveal her return to life sooner than she wished, but her magic and ability to reshape her body however she pleased made it rather easy to disguise herself so she could go out and about without anyone being wise to her true identity.

There were a few within the guild who knew who she really was, of course. Her fellow guildmasters Yurielle and Yulianna were more than well aware, as was her pupil Willow. However, the guild hall was almost constantly occupied by not just members of the guild but also a fair number of slaves that they had acquired upon their take over of Lavanitir Port City. So in order to preserve her alias, she mostly kept herself in disguise while she was in the more public areas of the building, only dropping the form in private.

Most of the guild and the public world knew her as Ezekiel Black. An alias of the male persuasion, he had long teal blue hair. One blue eye was visible to onlookers, while the other was covered beneath an eye patch. He wore a stylish blue suit of the finest make, trimmed in gold with a white fur cape draped over one of his shoulders. An assortment of jewelry adorned his body.

Presently, he was in the entry foyer of the guild hall on the second floor, looking down at the hubbub of guild members below as they went about their daily business. There was a small smirk on his face and a glass of red wine in one of his hands. He was getting ready to retreat deeper into the building to find something to occupy himself when the most fascinating individual strolled in, quite literally kicking the doors off their hinges and sending them flying as the people on the first floor ducked and dove out of the way.

Thana tilted her head curiously as she observed the woman, who didn’t seem particularly apologetic about the damage done to guild property, instead proclaiming her desire to join the guild. She was tall for a woman, with beautiful white hair and delicious pale skin. As the guild members below began to congregate with wicked grins, eager to teach the stranger a lesson, a single voice caused them to pause. “We always have room for more.”

Ezekiel descended the staircase with a cool smile as he approached her. “Though where you are placed depends entirely on what you have to offer. I could be gracious enough to let you join my guild. Then again, I am always in the market for new slaves… especially ones that are pretty and feisty.” His one eye made a show of looking her over before returning his gaze to her own. “If my co-guildmasters were here, they would almost certainly kill you on the spot for damaging our halls. I, however, have always had a taste for displays of boldness. So before I go through all the effort of making an example out of you, I’ll allow you the chance to convince me that you are worth my time.”
deltra of gangnam style
WORDS: 593 | TAGS: @Samsara
_____________________________________________________________________________________
Physio Manipulation | Mania
Character App | History | Vault & Tracker
Avatar of Ataxia
Golden Lacrima - Good until 09/02/21
« View previous topic · View next topic »

» Asherah, She who walks with the Sea
» In Walks a Weirdo
» *Walks onto Fiore*
» He who walks among spirits.
» Orokana walks in