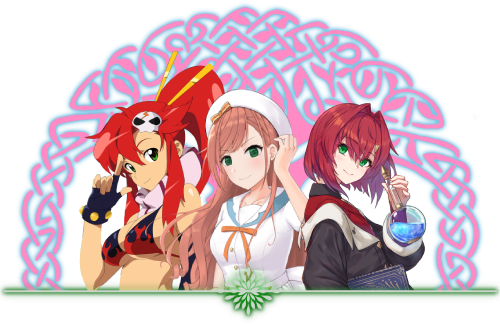 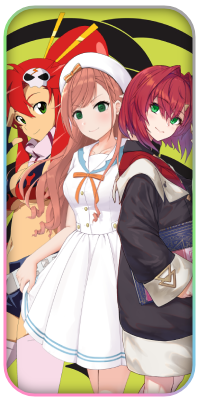 The fashionable redhead came clomping down the hall towards the quest board in her high heels, flicking her hair back behind her shoulder as she did so. Her black sequin skirt reflected the light as she walked, complimented by her matte black crop halter top and the fluffy black jacket she wore over it. She pushed up her red tinted glasses with her long black painted nails as she let her emerald green eyes look over the quest board. Her siblings never looked at it, or at least Jamie never did.

Speaking of her siblings, the other two redheads were making their way towards her. Jamie wore her hair up in a long ponytail, a black and red fire bikini top, her jean short shorts, and boots. Mysie on the other hand wore a white halter top under a red jacket, a black pleated skirt that had a built in ‘underbust’ so to say, and a pair of black platform boots that went halfway up their shin on their feet. Jamie felt her outfit made it easier to move with her guns, and Mysie just preferred to be comfortable in their clothes. That meant Blair had to be the fashionable one.

“I found a job for us!” She called out as she pulled it off the board. She looked at it before handing it over to Jamie. She felt proud of herself. “Huh? Pumpkins? Cool huh?” She giggled as she pointed to it.

Jamie twitches her lips a bit and shakes her head. “Not on our own.” She mutters as she looks up to see if there was anyone around them.

Blair groans before she turns around and puts her hands to the edge of her mouth and takes a deep breath before shouting out; “Anyone want to come with myself and my siblings to figure out about this pumpkin crisis?! Meet us by the quest board!” She used her sound dragon slayer voice to have her voice echo through the halls, but not shake the structure of the guild hall. Anyone who was within the guild would have heard her voice as clearly as if she was simply shouting from a short distance away from them.

Mysie rolled their eyes and signed with their hands to see what the quest in question was. Jamie handed her youngest sibling the paper and let them look at it while she glared at Blair. “You didn’t have to do that.” She says as Blair simply giggles, poking a finger on her cheek to make a ‘dimple’ as she looks at her older sister. Jamie rolled her eyes and pinched her nose. She did suppose that this was one way someone could get the attention of another guild member to go on a quest with them. But it also had the high potential to earn a rejection, or no response at all. 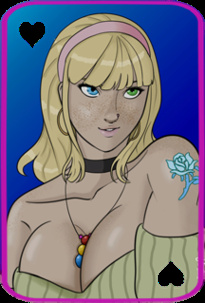 The days had been relatively good. Ever since her fight with Medeia in Cedar, and the unfortunate turn of events that occurred as a result, Nita had struggled to get her divine alter-ego, Maria, to stop sulking and ignoring the events going on around. It seemed that compared to the Primordials, humans were relatively much more flexible, as far as emotions went. While Maria's evolution from Primordial meant that the goddess had taken on some of Nita's characteristics, with a similar cross-effect happening to her Pergrandian host, the two of them still had distinct behaviors; Maria was less carefree, more serious, and less likely to take a loss in stride. Which was why her loss to Medeia had been a terrible blow to the goddess' confidence. Not only had she lost a battle, she had also failed to save the people she had tried to protect. Perhaps what made Maria all the more willing to sulk was the fact that when she had taken over Nita's body in Cedar, the Pergrandian had warned her not to bait Medeia, but she hadn't listened, and it had not ended well.

Nita, for her part, was relatively quick to get over it; it wasn't as though remembering the many unnecessary deaths didn't make her quite sad, they surely had, but wallowing in sorrow and misery was not the most effective thing to do, and Nita had realized that even if she was sad, there were things that still needed doing, and people that still needed saving. She would just have to bear this and become a better hero. Maria hadn't been as willing to roll with the punches, but Nita was beginning to feel that the goddess was slowly but surely mending. And that was a good thing, as far as the Pergrandian was concerned.

Today was a free day, with little to do, and Nita was just prepared to do a bit of reading about the histories of the nations of Ishgar, when a voice reverberated throughout the guild's chambers, obviously carried on the wave of some form of sound magic. A fellow guildmate was seeking aid in going on a mission. Even though there was reading to be done, it could always come after this mission. Whatever she felt, Nita had been made the newest Ace of Luminous Rose; it was thus necessary to meet with her guildmates from time to time and form relationships with them.

She did not need to spend time changing into her 'work clothes'. Using her Aspect of Fabric ability, she almost instantly changed into her Black Maria outfit, and then, taking a look at herself in the mirror, in order to be sure her looks were spot on, she teleported. The caller had said to meet them by the quest board, and so Nita appeared in a blink beside the board, her heterochromatic eyes falling on the three young women whom she recognized immediately. Even though she had never worked with the Faulkners before, she knew them, seeing as they were fellow Aces of the guild. She had been looking forward to formally interact with them, and this was the perfect occasion for it.

"Well, hello, ladies," she announced, smiling at them. "I heard someone needed some assistance in getting a mission rolled out. Well, I'm your gal. What's it about pumpkins?"