A Storm in the Snow 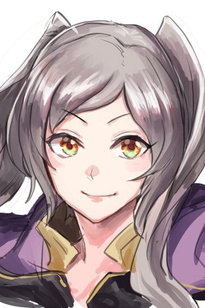 A Storm in the Snow

The winds seemed to howl in a particularly fierce way as a figure made their way up the mountain, barely visible through the thick veil of the snow caused by the blizzard. They were clad in an almost comical amount of fur cloaks, to the point where they could easily be mistaken for some sort of mountain beast at a distance; any human features blanketed by the thick veil  of snow tinted fur. Of course, even with all of that it was clear to see that they weren't faring very well; if the intense shivering and shaking was anything to go off of.

Well at least, that's the conclusion most sane people would come to considering the environment. The real reason for the shaking was actually excitement, excitement to the degree that it became literally visible. The woman underneath all that mess of animal fur was quite literally bouncing on her toes as she made her way up the mountain, the prospect of not only seeing a mega castle on a mountain; but also getting to live there being just a bit too much to handle. Well...she hoped anyway, if denied she could probably just like...live in their basement or something.

Did a castle even have a basement? Or was it more of a dungeon type situation? Oh what if they kept prisoners in there? That'd be pretty awesome...Questions for later! For now she had to figure out where she was exactly.

She had a general route planned when she arrived at the settlement but...after 'borrowing' more than a few cloaks and running off, the blizzard hit and she ended up sort of stranded. She figured is she kept going 'up' she'd see something eventually, but no dice on that front so far. She knew what to look for, what with the guildhall of Errings Rising being as infamous as it was; the problem was well...finding it. Eh, it was fine - if she kept going she was sure she'd find something.

Of course, it was upon that exact thought that something did decide to appear...multiple somethings at that. Wolves, and more than a few too; gleaming red eyes being the only noticeable feature as their stark white coats seemed to blend with the background - slowly forming a circle around the woman as low growls slipped past their maw. "U-uhm, nice wolves.." There was a twang of nervousness to her voice as she fumbled through the numerous cloaks draped over her shoulders, trying her best to find a knife or tool she could use. The rather clunky choice of clothing would make it a bit hard to cast magic, and it's not like she could run. Her only real options right now were to hope there was something left by the settlers or just duke it out with her fists.

Although that latter option did sound pretty awesome now that she thought about it..

Addre could smell a new one nearby, or at least one who wasn’t part of the ecosystem. It was nothing short of a miracle that his sharp sense of smell hadn’t been impacted by his foul Magic yet, still working as well as ever. It would be his first time seeing another soul approach their guild, human or not, since he did believe himself to have been the latest member joining their ranks. That alone motivated him to force his legs through the blizzard, his white jacket flickering in the cold winds.

It wouldn’t take a long time until another set of red, glowing eyes approached the cloaked lady from a distance. A threatening aura would travel its way towards her and the wolves, ‘poisoning’ their thoughts with a sense of paranoia and bloodthirst of a measure unheard of. As if death itself was veiling themselves in the blizzard, on their way to rip another soul from its meat vessel…

And yet, he looked fairly well once he passed the blizzard and came closer to the wolves and the bigfoot-looking creature in the midst of the pack. The wolves didn’t frighten him or anything, but… there was something extremely intimidating about the entity clad in several layers of fur. Addre grit his teeth, causing veins on his forehead to show along with bloodshot eyes of wrath. Upon closer look, he was also wearing a necklace of some sorts, carrying a wooden star as its embellishment.

His growing anger at the creature caused his lethal Magic to leak out of his hands, causing two of the wolves nearby to faint. This caused a frenzy to run up on the others, and thus all the wolves had left the area, while Addre was eyeing down this big shot. Who did they even think they were, huh?! Waltzing around like they owned the place…

Oh, there was some human woman underneath. False alarm. His Magic dissipated immediately after realizing that, but not a word escaped his mouth. He just… glared at her, as if expecting the woman underneath to state her case.

Amber eyes flicked to and fro as the beasts continued to circle her form, neither party making a move quite yet. Unfortunately there hadn't really been much in the cloaks that could be useful, aside from a pack of cards and a recreational pipe. Both fun things for sure, but neither really useful for beating the mess out of some wolves. A shame she wasn't a card mage, showing off and chucking those things around would've been pretty awesome. Maybe that's something to invest in for the future...

Regardless, she was tempted to just drop the cloaks and start blasting with the brand of magic she did have, but...then she'd be freezing and have to put them on after anyway. No, the most efficient and fun thing to do was just to start brawling. Besides, she was sure they'd end up running off anyway once they realized she wasn't exactly easy prey.

Of course, before any hands got to be thrown; a new pair of eyes made themselves known - accompanied by quite the intense aura. It was...powerful to say the least; wrapping around her in a manner akin to that of a blanket - although it did the opposite of making her feel safe. It was...pretty exciting all things considered. She could see it now, a giant, badass snow-beast luching it's way through the blizzard...scaring off all in it's way. Hell, a few of the wolves had already fled.

Sadly, as the being got closer; it became more and more clear that they were in fact not some super epic snow monster - but just some dude. Truthfully, it did take the wind out of her sails a bit. Sure the guy looked cool and all, what with his magic straight up knocking out two of the wolves -- but a Yeti or something would've just been so much more fun!

Maybe after she found the guildhall she could ask about it? Ooh, maybe they could form a Yeti hunting party! Although she'd have to get dibs on riding it first.

Pausing for a moment as she realized she was just kinda sitting there muttering to herself; Judith would lock gazes with the glaring man, tilting her head to the side as she seemed to ponder something...before immediately dashing over and getting in his personal space - eyes almost sparkling with excitement. "That was awesome, what kinda magic is that? Also, do you know where the guildhall is? Oh oh, and do you wanna go Yeti hunting with me?"

She was awfully excited to meet him. Addre instinctively tilted his head back a little when his personal space was invaded by this lass, but it also let him get a good view of her face. She looked a little bit like… hmh… she had the facial features of Medeia, somehow. She also donned silvery hair akin to her Majesty… was she their secret lovechild-

Oh wait, forget that, she didn’t know where the guildhall was… oh, she was new here! Addre could help her out, then, for he had been in her shoes long ago himself! A strange soul with bravery to venture into these highlands definitely deserved to lay their eyes upon the castle-

… W-Why did she want to go Yeti hunting with him? Also, what was a Yeti?

Addre wasn’t really able to answer her questions. He just kind of stood there, brooding over his thoughts. Maybe Medeia would have more ease introducing her to the guild, but he could still lead her to the castle itself. She didn’t smell like trouble, more like a… curious, little deer. No, more like a tamed wolf with all the pelt over her.

He lifted his hand and pointed further up the hills, indicating that her destination was still a walk away. With the storm still enveloping the air around them, it might’ve proved difficult to venture any further than here, but Addre had a quick fix for that. Thanks to his guildmates and the illustrious God Slayer - who often had a roll on the bed with his own, depressed mentor – Addre had become more than just a typical Slayer Magic user himself.

One, deep inhale, and the snow in the air raging over the hill began to fly into his maw at high speed. After a solid dozen of seconds, the blizzard had died down… replenishing his mana and clearing the view towards the large, fantastical castle in the far distance.

Then he began walking, nodding her to come along. Not a single word was spoken to her.