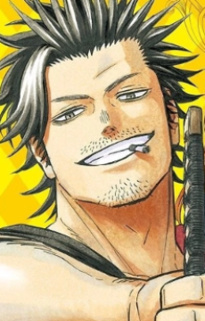 It was a beautiful and sunny day in Hargeon as the wandering Guildless mage known as Ryujin stroll through. It hasn't been too long ago since he had obtained the ILac from the nuetral grounds and after days of trying out every feature on the Lacrima Tech, thought it would be best to spend some time outdoors. It had been quite a while since he had been to Hargeon, his last memory of being in the place burned into his memory as he had been doing some rather bad things for bad people. However it was different this time around and the mage wasn't here to cause trouble but see what the city had to offer him.

Seeing as he hadn't eaten since his denture from his last location Ryujin decided to stop by one of Hargeons Infamous seafood places. It wasn't often that he had the luxury to eat seafood and being in Hargeon he just couldn't pass up the magnificent tasting seafood people all around fiore raved about. "Now what place shall I visit" the man pondered before his train of thought was interuppted by an elder man who seemed to be carrying a bag of something. "Excuse me young man, could you please help me with planting seeds for my farm? I would do it myself but I've hurt myself so I can't". "Ill make sure to pay you as well!" The elder man added lastly, while the request seemed rather harmless to Ryujin he had some doubts as not many would ask a random stranger to help them but the extra money wouldnt hurt. "Alright, I can help you sir. Where is your farm?"

After Ryujin answered the elderly man showed glee as the duo began their way towards his farm. It was a bit further than the Ryujin thought as it lay outside of the town but he knew the walk would be nothing compared to the work that he was about to so. Upon reaching the farm the elder man began to instruct and show the young man what he would be doing to plant the seeds and looking on the large farm knew he was going to have the time of his life. When his lesson on planting seeds where over Ryujin went to work immediately only stopping once or twice as he regretted not eating before doing such hunger bringing work. When the sun had finally set well Into the night the planting of the seeds was officially finished and Ryujin let out a rather happy sigh. "Great job! Now if you're hungry I have some dinner you can join in on as another part for your payment!" The elder man said from his farm house porch not too far from where Ryujin had planted the last seed.

Hearing the word dinner Ryujin quickly made his way towards the elder man who showed him inside and instructed him to go wash up a bit before eating. After enjoying the tasty dinner with the elder man Ryujin gathered his things and waved bye to his new farmer friend. If he was ever near Hargeon again he would make sure to come back and see him along with all fruits of his labor.