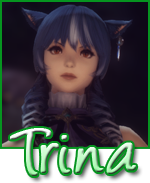 It was a beautiful day in the depths of the sakura forest that was Sakuramori-- entirely aptly titled, of course, as this place was-- where the sun was trickling into the canopy so perfectly that it seemed merely to be bleeding through the tops of the trees, casting dancing shadows as that giant nuclear ball of flame danced its way through the skies above and giving illumination to the buildings that were nestled in the blessed shade of the boughs. The people went about their days and lives as if everything was perfect, and the stories of the blessed guild hall of Luminous Rose in a nearby canyon were absolutely true as the shimmering pink river flowed its way at the base of the rocks to give a home to those of the flower that called that guild their place of rest and respite. Trina could have signed up for them, maybe. But no. They wouldn't have her. She didn't want them. It would have been a particularly bad time, even if everything they had was actually incredibly cute and secretly she wanted to go down there and paw at the flowers floating down the river. That was absolutely a wonderfully valid use of Trina's time because cute things were her domain and nothing could ever tell the Joyan native otherwise.

Ah, but there was the trick, wasn't it? She was a Joyan native. As Trina skipped her way down the streets, wearing her cute little frilly dress that she usually did, clad in purple, with her mary jane flats and the bowtie and coattee she was generally seen wearing, she was getting looks. There were very few other anthropomorphic cat people around here in Fiore, which was a rather evident thing as these normal Fiorean citizens kept staring at her. She was the oddity. She was the outsider, the thing that many people realized was the strange thing; some of those people that she passed gave her pitying looks as they recalled the destruction of her homeland, especially given that it was so new and so fresh in the collective civilian psyche. This was just how things were at this time, unfortunately. Trina knew this, and could absolutely play on that mercy if she had to; she would have twisted the words and thoughts of every one of these pathetic Fioreans on themselves if she had to.

But no. She was here, enjoying her trek through the forest, and loving the fact she could just spend her time and enjoy her life.

Even if she loathed every single one of these people. She'd keep that feeling buried. She'd keep it buried deep. It wouldn't do to break the cute, cuddly and adorable facade of the lovely little kitten girl who was just here because she had nowhere else to go after the destruction of her homeland. Well. That was also true. She was definitely that as well. However, Trina just needed to keep that buried as deep as she could to do what she'd come here to do all along:

Enough about rage, for like many kittens, Trina was absolutely easily distracted by shiny and pretty things. It was the unfortunate side effect of cat brain - once she spotted something shiny and distracting, everything else came a very distant second to her. This was the way her life was, and Trina wouldn't have it any other way; she enjoyed the simple things in life, like finding a coin on the ground, or looking at pretty pictures and paintings. Some would have accused her of having the brain of a child, and in many cases that was absolutely true. She did have a great number of childlike tendencies, as the way she skipped down the dirt paths of the forest village was sufficiently evident for. On most days, she was joyous and carefree, simply happy to take in the world around her and enjoy the life that she was living while she was in the moment to do so. Watching a city burn would do that to you. It rather efficiently changed your life priorities, and Trina wasn't about to change the outlook on life she had that made things better in her life such that she could appreciate the way the world was around her. After all, was life not there to be enjoyed? The sweetness of thue first bite into a fresh red apple? The sound that birds made at the beach as the waves crashed into the shore in the background? The beautiful smell of freshly-baked bread?

These things, and more, were oh so very important to Trina. She had to protect the joy in her life, and she would do it! With every fibre of her being! She was going to be a strong kitty, protect her friend Ray who did not need protecting at all, and would find a happy place to live right after she took a nap somewhere. Naptime. Her ears perked up as her eyes cast around, trying to find somewhere suitable maybe that she could take a nap under a tree. Somewhere that the sun was almost touching as time passed so that it was near her but never in her face. That was a good nap spot.

Instead of taking a nap, the blue-haired cat decided to sit down in that spot under the tree. Some of the petals were falling off the tree as they bloomed, and as one touched the dirt floor beneath her, she picked it up and considered it, sniffing it gingerly with her little button nose - it smelled fresh, clean, and the wonderfully refreshing floral scent filled her senses. It was nice. She liked the way it felt on her fingers, too. Such simplicity was the best some days. Trina could never turn down a good opportunity to just sit down and appreciate nature as best she could, because it was so peaceful. Unless there was a storm or something, sure, but who went outside in that kind of weather?

Mm. It was really nice and warm in that spot. Maybe she could just close her eyes and...

The memories came back to her in her dreams like the did every night. Despite the fact that sleep was one of her favourite activities, aprticularly where she could find a warm spot, Trina knew that sleep was also one of her worst memories as every night was filled with the same burning reminder of the fact that she had lost so much: the ash cloud that burned into the skies as those she knew and held dear dissipated into the wind as carefree as the dust they had returned to, moments before the Desiertan raiders set upon what was left of the city that she had called home - those who were left were forced to flee before their fate was worse than death, and Trina was only lucky that she'd been outside the city that day. Friends, family. Places of work and leisure. Memories of those who had come before, and those who were yet to come. Everything that day was absorbed into the void of nothingness the way that everything had been done since the dawn of time: all came from nothing, and all inevitably returned to nothing eventually. However, for so many of those people, it was really not their time - but fate decided otherwise.

So, in that moment, she had begged and pleaded with the only person left in her life that they leave, not look back, and do something about it to maintain what was left of their lives. She remembered the moment that she had to apply for her international passport - she'd needed Ray's help with some of it because she simply didn't know how to fill it in. She wasn't the sharpest tool in the shed and she knew it. He already had his, being a famous adventurer and all, but Trina had never left Joya in her life. Hell, for so much of it, she'd barely even left Felidae City. Now, though, she was going to have to uproot what little she had left and find a new home.

That home would, ironically, be the place that was responsible for the deaths of so many. But hey, she had a passport this time so that she could explore the world. It was good that they got out when they did, too, because the world borders started closing only days later - and they were well on their way to another country in order to start taking care of their lives. From there, the could find the truth about what happened that day of what was supposed to be a peace treaty, and take back their lives and make something for themselves once again.

But no matter of willpower could erase the memory of watching her home become the ash cloud void. The pillars of cloud and fire would indelibly be etched into her psyche forever. Every night she would see them. Every night she would find fear gripping her heart. And every night she would remember why she was here, in a strange land. This was all she had left - no home, no family to return to, and barely any friends. Maybe here, after it all, she could find some peace in her dreams.