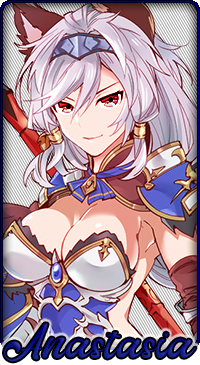 You can see their eyes upon you, watching. They don't seem to take you seriously as you explain your plight and your intentions, yet you do not blame them, for you too would have thought the same had you been in their shoes. But this was your way in. If you could take care of this guy and demand the town guard to allow you to transfer him to the Rune Knights Headquarters, you'd have a proper reason for being there. One more believable than returning a badge entrusted to you…

The guard captain looked at the brunette in front of him, the woman far too slim to truthfully claim having had a proper meal down somewhere in the past few weeks. Her face was gaunt, but the emerald eyes glaring back at him were fierce and alert, mayhaps even more demanding than her physical disposition made believable. At least the intent was there? The man looked her over once more and shook his head, a sorrowful frown creasing his balding head. "I'm sorry sweetheart, but you don't quite meet the requirements to take this guy down-- with all due respect, of course, but you're kinda," he gestured at her figure, making the brunette flinch ever so slightly. Yes, she knew the gaunt expression currently plastered upon her face was all but convincing, but she needed this. "Sir, with all due respect- my physique should be the least of your worries. I'll find and apprehend this murderer without any-"

"We cannot afford to take any chances, kid." The captain grumbled, cutting her off. "If you fail I have another casualty on my hands, which I'd rather not. You're not willing to show me anything else to back up your claim, neither skill nor magic proficient enough to stand your ground, because…?" "I have my reasons, sir. I cannot." The man sighed. "It's quite simple then, miss. No proof, no clearance. If there's anything else I can be of help with, tell me now; if not, you may leave. I have other things to take care of." Tsuna tried to say something, but the sudden glare thrown her way made her simmer down immediately, leaving the office in defeat.

Tsuna was well aware that she looked more beggar than warrior at this point, partially to blame for allowing Anastasia to have kept the reigns on their body for so long. Especially after having been 'released' back into the world after her time with Medeia, she had noticed the Otherworlder stuck on her body had been in a state of mourning and heartbreak after realising she had been one of many rather than one of a kind. Regardless of her gratitude towards the affection after having lived in fear of any physical contact for so long, Anastasia had been left to mope for quite some time, neglecting the body they shared until it had become this-- an empty husk lacking the energy it once held. With Anastasia's consciousness having faded back into the background, Tsuna had taken over again and had started mending the damage done; it had helped to a point, but not much more.

What they needed to progress was money, a steady income and a roof over their heads. Helping take in this murderer would've been the perfect opportunity to rake in some coin and prove herself capable enough despite being a foreigner. Perhaps even landing herself a recommendation so she could apply for the recruitment program of the Rune Knights, which seemed the most efficient way in gaining all of the above.

As she walked onto the cobblestone streets Tsuna patted the wrench at her side, which was a poor excuse for a weapon, but still better than nothing. If she didn't get the bounty contract by asking, she'd just have to bring the man in as is and show them wrong instead…. Now all she had to do was locate him. And nothing beats finding a fugitive like dipping into the mind of one herself.

Re: Mind the Murdering Miner!

Maybe, just maybe, you should've asked for that back-up after all. Just saying. Because I'm not quite sure how we're going to fight off that amount of meat… let alone that hook it's attached to.

The brunette threw herself unto the ground when the meat hook came crashing her way, hearing the rather terrifying ease with which it pierced through the stack of crates before her. A soft clunk made her look up, and Tsuna had just enough time to see the chain tighten before it got yanked, pulling half of the stack with it-- the entirety of it crashing down where she'd laid only moments ago. Yes, she had underestimated this man. Both his size and the amazing speed at which he moved despite his rather meaty exterior, one that seemed to hide a lot more muscle than many would give him account for. No wonder the man had been able to murder so freely all this time; for a moment she even pitied the guards that had been sent to deal with this guy, and the sacrifices they'd made upon doing so. Hell, what was she even doing here on her own? Armed with nothing more than a wrench and her wits against a meat cleaver, a carving knife and a chained hook. Stick versus boulder. If she'd get off without any injuries it'd be a bonafide miracle, really. But then again, regret always comes too late, doesn't it?

Tsuna scrambled back onto her feet, grabbing one of the loose planks from the crates as an extra layer of defense, unclipping the wrench from her belt with her dominant hand. The murderer grinned his most wicked grin, an almost animalistic glee present in his predatory eyes as he regarded his newest victim- one that had sought him out, rather than he her. The brunette didn't have to spend much time locating the man; Anastasia's subconsciousness had provided her with the necessary information on perfect hiding spots for fugitives, having once been one herself. And once they found those places perfect for hiding out, it wasn't all that hard to find the one person matching the description provided by the guard captain when they discussed the bounty. Not many stood at a whopping 6 and a half feet, nor sported the volume this man had.

Re: Mind the Murdering Miner!

In case of persistent opposition, hitting the extention with a wrench should do the trick!

The man's shadow loomed over her as he effortlessly smacked the plank she threw out of his way. She knew that in this moment, even if she were to call out for help, none would come to her rescue; at least not anyone who wasn't tired of living or in cahoots with the murderer in question. Running away was an option, but not one that would warrant her the rewards she actually wanted. And then there was the matter of her Samurai's pride; although she was not born one and did not hang as closely to their creed, she was still raised as one. If she didn't put an end to this right here and now, the man would just resume killing until the guard either grew a pair to take the murderer on themselves, or until they hired the next best thing to take him down. Neither being options she wished to chance upon.

The grip on her counterpart's wrench tightened as she inched away, slowly bending her knees in case he were to dash forth. "Sooo… there's no way for us to talk this out, is there?" Tsuna attempted poorly at distracting the hulking menace, who only grinned in return as he stalked closer, beady eyes focused solely on her. "No? Yeah no, didn't think so either." she let out a nervous little chuckle, then made the mistake of glancing behind her, to see what laid on the path behind her in case she needed to run. Not that it was why she actually looked back; she just wanted to appear off-guard so the murderer would make the first move. And lucky for her, he did. She hadn't expected for the murderer to close in as fast as he did however, leaving her with just enough time to drop down between his legs, yamming the wrench it into her opponent's crown jewels with intent. It struck true, as heard by the sudden high-pitched wail echoing through the street. In that short moment of unabashed pain, the brunette kicked one of his legs right underneath him, and struck true once more, this time shattering several of the fingers eagerly trying to protect his weak spot.

She knew she couldn't quite threaten him with sharpened steel, but solid steel proved just as effective. As he whirled around to try and maim her, Tsuna grabbed his arm and wheeled her heel into his face, feeling a rather satisfying crack underneath her boot before she was tossed further down the street. Well, someone was mad. The miner pinched his nose, trying to halt the persistent bleeding as he glared at the small woman. Now it was Tsuna's turn to grin. "Should've opted for just talking." She said, toying with the edge of her wrench. Although the damage she'd done was rather insignificant, it would at the very least lessen the man's speed for a bit. Roaring defiantly, the hulk still came running for another attack; yet this time, instead of repeating her previous strategy, Tsuna went for the high ground. Using one of the barrels as a step-up she tossed her wrench at the murderer, who deflected it with his chained hook, getting the chain trapped around her wrench in the process. While he had his eyes on the wrench, Tsuna changed her trajectory and jumped off against the wall, catapulting herself behind the hulking miner and towards the wrench. It was a streak of luck as he stumbled over the mess he'd made earlier, granting the young woman her chance. She pounced on his back, wrapping the chain around his thick neck and anchoring it on one of the wrench's heads, so that all she had to do was  twist it and hold on, like a cowboy during a rodeo.

What had first been angered shouting as he tried to pull her off his back soon turned into panicked gurgling as he clawed at the chains digging into his neck. After a few minutes the struggling lessened, his body slumping and falling down with a heavy thud. Tsuna let go when she was certain he'd lost consciousness, and let out an exhausted sigh, only then becoming aware of the booming pain on the side of her face, a fist-sized purple bruise flaunting on her forehead and around the edges of her eye. Looked like he had managed to hit her after all. Rather his fist than that hook, she muttered to herself, getting up again. Now he was out cold she'd have to find ways to restrain him, and then to somehow haul his ass back to the guard captain. Preferably before he regained consciousness.