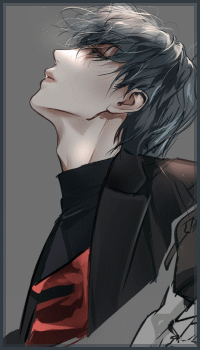 A young heir stuck in an old family tradition- up until a couple weeks ago, Noel had been no more than yet another cliche story. Had anyone asked him about his fate back then, the dark-haired boy wouldn’t have known any better than to predict a bleak, rigid future. Soon, however, the stars would prove him wrong.

Fate sure moved in mysterious ways, not that the Astra would ever dare to complain. He favoured surprises over clearly lit paths, for what else was there in life to keep you on your toes? Speaking of surprises, welcome Meliora Vitae into the picture. A guild with just values, strong mindsets, and a massive floating ship that would make for the perfect means of avoiding his responsibilities: what else in the world could he possibly need?

Well, there were a few things he could use. Knowledge of technology was one of them.

You see, despite having somewhat of a functioning brain, Noel had never been too keen with the lacrima-fueled technology that seemed to grow more prominent with every passing day. The inner workings of things as basic and common as ‘Ilacs’ were already lost on him, so communicating with let alone gaining access to a ship too complex to comprehend wasn’t exactly a walk in the park. Fortunately, the guild members had been polite enough to respond to his old fashioned mail with a relieving remark: they would pick him up at a town near one of their pit-stops.

And so Noel had found himself wandering through the casual, humble streets of what seemed and smelled to be an ordinary farmer’s village. it was admittedly not the most flattering of places to introduce himself, but the scenery likely wouldn’t be too big of a deal anyway. Their stay here was transient, after all, for the guild-hall was eagerly yearning for a new member’s footsteps to press on its metal hull.

Aiden approached the meeting place in a small white and silver pod unit that was just barely enough to fit three people in it. As he fiddled with the many buttons on the dashboard, he would put the pod into auto-drive and put his hands back behind his head, resting it on the head of the seat and closing his eyes. Sighing, he would mutter to himself “Honestly, I don’t know why they would choose me, of all people, to go pick this guy up from the station…” he complained, the car inching closer to its destination.

In truth, he was the least qualified person to take on this request for multiple reasons. For starters, He was still a newcomer to the guild himself as he had only joined less than a month ago. He also did not know anything about the area he was supposed to pick this person up in or even how to actually drive one of these pods, hence the auto drive.

As he rolled to a stop at the pick-up spot the pod let out a small chime to let Aiden know that his destination had been reached. He slowly opened his eyes and glanced out at the scenery beside him and he would see the boy standing there. He would touch a screen on the dashboard and pull up his mission to check the name of the person he was supposed to meet. “Noel Astra…” he would confirm to himself before pressing a small button on the drivers side.

The passenger car door would slide upwards to reveal a rather technologically advanced inside with many lights and buttons flickering. “Would you be Sir Noel Astra?” Aiden would ask motioning to the seat beside him “If so I would ask you to enter the pod so that we can be on our way.” He would speak bluntly, not trying to hide the fact that he didn’t really want or even know what he was doing in the situation.

If the boy would decide to get in, the door would close with the press of another button and start the journey to the main ship of the guild. Aiden would assume his previous position with his head back on the seat and start to inquire “So… Tell me about yourself. Where are you from? What magic do you use? Quite frankly anything would make this trip a little less boring.”