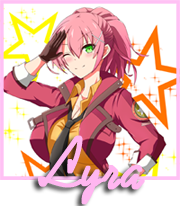 If anyone ever cared to pay attention to the outside world, there was a young lady standing in front of the grand entrance to the guild hall of Luminous Rose. In one hand was the handle to a suitcase full of what was left of her belongings, with two long-handled batons sitting on top of the case rather carelessly. The pink-haired girl seemed to be staring at the marvellously-inlaid doors, contemplating whether she was still going to open them or not. This was a big decision. This was the pledge, the knowledge that she would spend time and livelihood with these people; joining a guild was not a decision ever to be entered into lightly.

Right. You’re sure about this? The voice inside her head was not only entirely real, but a wonderful life coach when it came to big decisions.

You barely know anything about, um, anything. Are you sure you want to-

”Name another pink guild. Look. It’s pink and flowers, which are things I like. And besides, they want to be the best. So do I. If I don’t take this chance, I’m going to regret it for the rest of my life. We do not want that.”

Alright, kid, I’m trusting your judgement. You’ve got a good head on your shoulders. Crush it.

”Thanks.” Swallowing her trepidation, Lyra raised a hand to knock on the gigantic doors before her, the entrance to the fabled Grand Hall of Legends. This place was supposedly one of the most opulent structures ever erected, amidst the cataclysmic ruins that had been reborn to something so utterly beautiful that it was almost enough to bring a tear to the eye. The flowers floating their way down the ravine’s river were more than enough to catch the eye, and more than once had Lyra almost tripped down the stairs as it caught her eye. This place was more than just beautiful, it was utterly sublime. If she came to live here, well, there were very few places that would be better off for her mental state. Who wouldn’t want to live in a gorgeous place like this?

If someone answered… well, that was entirely another story. Hopefully, they would have her. It was a long trip from home to come here and offer her services to the Rose, one that she fervently prayed would bear fruit. The reputation of the guild absolutely preceded them - they had an eye for everything. Beauty. Skill. Ambition. If these were all true, then it was still a small hope that they would take her. If they did, then it was really time to push herself to her absolute limit. Would they take a total greenhorn? Lyra very sincerely hoped so.

Three short knocks, a step back, and a gentle tremble of her entire body from sheer nerves.

What awaited Lyra Karant, in the hall of the Rose?