A Favor for Smith 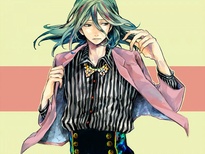 A Favor for Smith

After doing a favor for the blacksmith named Smith, Tad had been pleased with the work that Smith had done on his knives, Stabby and Slashy. For this reason, he'd offered his services to Smith whenever he needed and now, Tad was on his way over to Smith's because he'd summoned him. When he arrived, Smith gave him the rundown of the situation: some of his errand boys had been having run ins with brigands and he wanted Tad to accompany them to ensure there were no troubles. It seemed like a basic request and something Tad wouldn't mind doing to increase his equipment's strength. He met with the two men, a couple brothers named Zeke and Zack, neither of them much older than 15. Tad found himself sitting in their wagon as the three of them headed out of Hargeon Town to pick up some iron and other supplies from a nearby mine. And a few hours later, the trio, along with a wagon full of materials were on their way back to Hargeon Town. Tad kept his eyes and ears open, watching and waiting for any trouble to arise. It was on this route that Zeke and Zack had run into issues, so Tad's hands were waiting by his knives, ready for use at any time.

Up ahead, a young lady was crying in the path, clearly upset. Tad was suspicious though so were Zack and Zeke; "This is their MO..." Zack said.

"Stop here." Tad commented thoughtfully. The wagon stopped about 200 feet in front of the young lady, much earlier than a wagon would normally stop. Tad hoped this would throw off any plans anyone may have about attempting to steal their supplies. "I'll go talk to her," Tad added as the wagon slowed, before leaping to the ground. He moved gracefully but quickly up to the lady. "Mam, you're in the road and we have places we need to be." Normally, Tad would be interested in helping her, but at the moment he was all about business. He was more concerned with the mission and was fairly certain she was simply there to stop the wagon.

"Why are you so insensitive?" the woman asked, a hateful tone in her voice.

"We can give you a lift to Hargeon, if you need it, but we do need to keep moving. Can I help you off the road?" Tad was trying to get this lady out of the way without being super rude. He was also trying to look into the nearby woods to see if there were any bandits in waiting. If there were, he was sure they'd likely be moving back to where the wagon was to surround it. The movement was really what Tad was looking for.

The woman looked up for the first time, seeing where Tad was looking. She instantly realized that he was there to protect the wagon. "Get him!" she yelled, inciting her men to rush out to attack Tad. This wasn't their normal plan, but with Tad here they had to change things up. The wagon was already stopped so that part of their plan was a success. If they could remove Tad, then they could just go get the wagon whenever they needed and with 10 guys, they should be able to take Tad out quickly, she guessed.

Tad wasn't too surprised when men started coming out from the woods on all sides. They had picked a good place for an ambush, the road was too narrow to turn around a wagon and the trees provided plenty of cover for the men. Of course, they were dealing with a mage this time so their luck had run out. "Yin! Yang!" With that, his two foxes appeared from another world to help Tad battle the bandits. Tad leaped over the woman who was still lounging in the road. Based on their plan, all of them would be on the side the wagon was coming from, so there were no men on this side of the lady.

He turned, counting 10 men coming towards him, most with clubs, a couple with swords. Yin, the dark fox, rushed straight towards one of the men, who swung his club down at the fox's head. Yin was too quick and evaded the weapon to the man's side. The club hit the ground and Yin fired off a bolt of Yin lightning at the man's rear as she turned around behind him. Yang also moved towards the men, but aimed for the gap between two of them. They both attempted to hit the fox, but he stopped allowing their strikes to go in front of the white fox. His tactic, unlike Yin, wasn't to take people out, but stall them so Tad or Yin could do the work: he wasn't much for violence after all. Tad back stepped a couple more feet as three men were on him quickly. He evaded their weapons with relative ease, his speed reaching a point no average man could really challenge him. The fact that he had all three opponents in front of him was the only saving grace he had at this point, his speed couldn't handle people from all directions.

Tad allowed one club to slide just inches to his right before throwing a Yin lightning coated palm into the man's forehead. The lightning coursed through the man's body, paralyzing him near instantly. The next man swung his club around the first man as he fell to the ground, only to meet nothing but air. Tad reached over and threw one of his daggers at the final man who was carrying a sword rather menacingly. The blade lodged itself into the man's throat, causing him to suffocate and die pretty quickly. The second man looked around, surprised that he was the only one left.

Seeing her men being taken out with relative ease, the woman ran off into the woods. After moving the dispatched men, Tad hopped back into the wagon and said "Onward!"