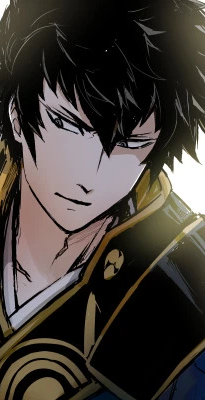 Solemn Park...was anything but solemn at the moment. A huge line had formed in the usually peaceful area on this morning. Folks were being registered for passports in order to travel to various countries beyond Fiore. Among these people was Hans Walker, a no-name mercenary who is just trying to get by in life through taking various jobs. The slayer wanted to get himself a passport to easily travel between countries, expand his opportunity when it comes to merc work, and making cash. He could've just snuck from country to country like he used to do with his mentor...but those were always troubling. This way, he'd be able to cross these borders a lot smoother compared to back then.

The line was painfully long, but fortunately for Hans, he was not at the end. He may be patient, but the man certainly did not envy the poor soul that had to wait through all of this at the back. Hans just stood there with his arms crossed, looking idly to his left. He was in his usual attire and his sword, Somber Beginnings was resting neatly in its sheath on his waist. The merc did not need his sword for this, but he didn't want to risk leaving it behind in the inn he was currently staying at. The inns Hans tends to stay at aren't exactly...great, and are usually filled with shady folks. For the most part, other people who stay at these inns don't try to bother Hans since he tends to make it clear that he is no prey...but there are still the few who try their luck and usually walk out of it with a few broken bones. Despite that, it would not be wise for Hans to leave any of his valuables behind even if he won't be out for too long...not that he has many things of value, to begin with.

Things were going by smoothly in this line for the most part, save for some rowdy folks either trying to cut in line, pick fights, and all that nonsense.

"Oi, buckoo." Just then a masculine voice spoke up, catching Hans' attention...but it wasn't aimed towards him. The slayer shifted his tired eyes over to see some thug approaching the guy in front of him in the line. "U-Uh, how can I help you?" the person in front of Hans asked. The thug grinned before making a gesture with his head. "Welll, you can help me by lettin me get in front of ya." the thug claimed, causing the other male to blink a few times. "W-well I'm sorry b-but I have been in this um line for a...while an-" The thug then stepped closer, interrupting the male. "Better choose your next words wisely, pal...I won't mind takin this spot from ya by force." The thug added, cracking his knuckles.

As this happened, Hans watched with a stoic and somewhat tired expression on this face. Hans can be patient...but to an extent. He did not want to run the risk of getting caught up in this potential beat down because of how close he was to it, nor did he want to potentially wait longer than he already has.

"The line starts back there." Hans simply said, his tone matching his current expression. "Eh!?" As the thug looked back at Hans, the merc made a small gesture towards the back of the line with his head. "What did ya say, bud!?" The thug was now getting in Hans' face. He glared at the merc, but the slayer's expression remained unchanged. Hans did not bother to repeat himself nor say anything else, knowing how these types of folks act already, having grown up in areas with people like this. "Ain't gonna say nothin else, huh?" The thug grinned before stepping closer. "Know what? Maybe I'll take your spot instea-" As he said this, the thug attempted to place his hand on Hans' shoulder, but the merc caught him by the wrist.

"Ngh, th-the hell? Let go!" As the thug struggled and attempted to punch Hans with his free hand, a dark aura surrounded the merc's body, feeling almost sinister...and corrupted. He then twisted the thug's wrist, breaking it in the process! The thug let out a painful scream that caught the attention of nearby people who hadn't already been paying attention. Hans would then let go, watching as the guy got on one knee and clenched his broken wrist. "Y-You piece of shit!"

"What's going on here?" Two guards approached the scene, looking down at the injured thug before looking over at Hans who looked a little annoyed. Looks like he was going to lose his spot in line....until...

"Th-thank goodness you two are here!" That man in front of Hans said, bringing all attention to him. "That thug was...harassing m-my friend and I, but then he...tripped!" The timid male said before looking at Hans, trying to get him to go along with it. "Er...right." Hans added after blinking a few times. Some of the nearby people in line also nodded in agreement to this while the thug was too busy crying about his injury to object. The guards looked at each other and simply shrugged before dragging the thug off.

With them gone, the timid male sighed before looking at Hans. "I appreciate the save." he said. Hans looked at him for a second before looking forward again. "Only did it so I can get through this line faster." Hans claimed. "Hah, figures." the guy said, not at all bothered by it before turning around. "But...thanks...for covering for me." Hans added which the guy gave a nod in return. "No problem!"

After that, the line would go by smoothly and eventually Hans would reach his turn. Hans gave the clerk all of the needed information and they followed it up by snapping his picture...which he of course did not smile for. That tired expression was now going to haunt him for the rest of his life...but he at least now has a brand new passport....