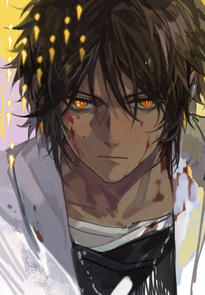 Magic Name: Takeover - Monster Soul
Magic Type: Take-Over
Description:
There are things that scare people. When the sun has set and the sky is dark, when the moon and stars are all that illuminate the darkened landscape… When the living have gone to bed, the dead come out to play. Those terrible creatures with bloody claws and teeth sharpened to razor points. Creatures that should, by all means, be past their expiration shamble across the blighted earth in search of sustenance.

These are what we call monsters.

Ormir has never been afraid of monsters. In fact, his fascination with the macabre and search for greater power has led him to take on their powers as his own. The result is a magic that allows one to mimic the monstrous abilities of the creatures that stalk the night. By consuming the essence of monsters and incorporating them into his own body, the caster is capable of not only mimicking, but actively becoming a monster in their own right. Of course, such power comes with a price of its own. But to Ormir, such a price is small compared to the power he gains.
Unique Abilities:

Cannibal Arm:
Name: Cannibal Arm
Rank: D
Take-Over Type: Partial
Duration: 3 posts
Downside: While using this take-over, Ormir’s arms become more vulnerable to fire.
Description: Summoning the power of the undead, Ormir turns his arms to something gnarly and rotted. By invoking the ghoul, the skin becomes harder and tougher, like rawhide. They turn numb, blocking off the sense of pain from there. Though the defensive bonus isn’t that much, the cannibal arm is still nothing to be trifled with.

Cannibal Grip:
Name: Cannibal Grip
Rank: D
Duration: 3 Posts
Downside: This ability is a counter, and thus requires Ormir to take damage before it can be used.
Description: Ghouls are known for slow regeneration. But with a pump of magic, Ormir can not only accelerate it, but put it to use. If a physical object strikes Ormir’s arm while this take-over is active, the caster can make the flesh extend and stitch over the wound, thereby gripping onto and trapping whatever weapon was used. Once this ability ends, the regenerated flesh vanishes.

Cannibal Jaw:
Name: Cannibal Jaw
Rank: D
Duration: 3 posts
Downside: While using this takeover, Ormir cannot speak. Due to his jaw being, y’know, rotten.
Description: By invoking the power of the ghoul, Ormir turns his jaw rotted and diseased. Though it restricts the finer movements, it highlights one of the greatest abilities of the ghoul: Biting. While using this take-over, Ormir’s jaw grows incredibly powerful, able to bite with much more force than usual. On top of the numbing effect, this take-over has the potential to be absolutely terrifying.

Cannibal Turn:
Name: Cannibal Turn
Rank: D
Duration: 3 posts
Downside: This ability requires a bite to work, and is therefore quite difficult to land.
Description: One of the ghoul’s greatest strengths is the ability to turn others into ghouls. By biting a living being, Ormir can spread the curse of undeath to another. This curse is essentially a poison that spreads over the body from the bite point, causing flesh to rot and decay. It only travels a short distance before stopping, but the numbing effect can make it very hard to move the part of the body that is bitten.

Monster Soul: Frankenstein:
Name: Monster Soul: Frankenstein
Rank: D
Duration: 3 Posts
Downside: This take-over greatly reduces Ormir’s mobility, reducing him to the shambling monstrosity he emulates.
Description: The power of the ghoul is a scary one. Shambling monstrosities which stalk the night looking for fresh meat to feast upon. Nigh-unstoppable and more powerful than their rotted appearance would let on, these creatures are perhaps one of the most feared, and for good reason. Ormir has spent a long time matching himself to the essence of creatures which shamble in the filthy night. Creatures which came from mud and rise to devour the living. Admiring their durability and vitality, Ormir’s first full take-over is the form of a ghoul.

Upon activating this take-over, Ormir’s form becomes much larger. His skin becomes tough like rawhide, and his strength increases in contrast to his body’s atrophied appearance. In addition, several seams of stitches appear over his body, as if he were simply put together from found pieces. While in this form, Ormir loses speed, but gains strength and toughness.

Frankenstein’s Unlife:
Name: Frankenstein’s Unlife
Rank: D
Duration: Passive
Downside: Ormir’s Frankenstein form is much more vulnerable to fire, being much easier to set aflame.
Description: The most notable feature of the ghoul is its durability. Whilst in this form, Ormir’s toughness skyrockets. His skin is hard to meaningfully wound beyond shallow cuts. On top of this, he is almost completely numb to pain. Nothing can stop the shambling ghoul on its path to devouring the living.

Ghoulish Integration:
Name: Ghoulish Integration
Rank: D
Duration: 3 Posts
Downside: Limbs obtained this way are much weaker and can be effectively eradicated very easily.
Description: This is Ormir’s unique addition to the ghoul’s abilities. By using the stitches upon his body in combination with a ghoul’s regeneration, he can add loose body parts to his own body. By attaching dead limbs to the seams of his body, Ormir is capable of adding extra limbs to his body for the duration of this take-over. These limbs have almost no dexterity, only enough to pick up and hold things at best. But they do have the same strength as the rest of Ormir’s body, albeit at risk of simply flying off.

Name: Cannibal Heart
Rank: D+
Duration: 3 Posts
Downside: Reduced energy level, increased lethargy as energy is devoted to the heart.
Description: A ghoul’s greatest strength is their vitality. Despite being dead, a ghoul’s body has quite the amount of energy. This take-over invokes that energy. Ormir summons the heart of the ghoul to gain its vitality. Though this mostly just gives a buff to his vitality, the caster also gains access to the most valuable ability of the ghoul: Their regeneration.

Ghoulish Regeneration:
Name: Ghoulish Regeneration
Rank: D+
Duration: 3 Post
Downside: Being on fire will completely prevent this ability from functioning.
Description: By calling upon the vitality of the ghoul, Ormir gains the ability to regenerate. The heart of the ghoul pumps vitality into every part of Ormir’s body, allowing it to heal at an accelerated pace. Cuts and slashes will heal quickly, and even broken bones can be healed with enough time. This ability cannot, however, regenerate severed limbs. Once a body part is gone, it is gone for good. Otherwise, minor wounds (shallow cuts and bruises) can be healed in one post, major wounds (deeper slashes) in three posts, and bigger wounds (broken bones) only when Ormir can dedicate all of his energy to it.