To think that Imai hadn’t been to the beach ever since that mermaid invasion was… well, quite reasonable, and for a reasonably reasonable reason, in fact. You see, he met this immeasurably hot babe – like a hottie-hot babe with a body-like bod’ and a butty-like bod’ like that to the point where his brain had lost a lot of mass during their time together. And before you judge him – she was apparently a succubus, so don’t blame his hype for her! At least, she was a kindhearted one who let him live after their ordeal, and he would carry that experience as a badge of fucking honor on his chest ‘till kingdom fucking come or his water hose do!

But… there was a curse behind the pleasure. Finding himself in the beach again made him anticipate someone of her caliber to meet his eyes, b-but it was unfair due to the lack of aphrodisiacs in the air, and Imai began feeling… p-picky? PICKY?!?!?! Damn, had he not slapped himself silly a few times before donning his blue trunks and carrying Mai under his arm towards the beach in Hargeon – by train, mind you, ‘cuz a little bird had told him that the best beach party was being held in Hargeon.

Now maybe it was because of the security of Hargeon that had grown quite famous across the land ever since the attack long ago, but it wasn’t actually that packed. Oh well, it was still filled with babes in swimsuits and bikinis, so Imai was ever as grinning with delight! Although, none of them could really stand up to Mas-

“P-Pull yourself together, you idiot! Plenty of fish in the sea…!” he motivated himself with fire in his eyes before carrying Mai towards the buffet held under a huge parasol with smoke coming from the freshly-cooked sea meals… o-oh, yeah, and he was on Mai duty today, too.

“Anything you wanna eat, Mai? Except everything, of course, otherwise Miss Luna will get mad, and then she won’t make dinner for you ever again – w-what I’m trying to get at is choose some… hey, Bri, don’t be shy, girl; it’s *munch* actually some spicy-ass food they cooking here…!” Some of his road-boy Shirotsume accent was leaking out of his mouth while he was munching a crispy chicken wing, letting Mai stand on her own to search for food to be put on a plastic dish. Bri and her company, one of the newest members of Sabertooth, were more than welcome to feast along with him – as Ace of Sabertooth, he had to make them feel welcome!

And he was always gonna be himself, too!

She wasn’t sure what possessed her to come on this little trip, given how naturally awkward she was around people she didn’t know. The copper haired teenager felt completely out of her element and her clothing only made it worse. She'd much preferred to wear her usual combat outfit but she’d been told that it just wouldn’t do for the beach and so Brianna had ended up wearing a swimsuit instead, matching the colour of her hair. Her cheeks were bright red from embarrassment but she was just in too deep now and so she was just going to have to try and make the best of it. If she was honest though, she probably did need to get away from her smithing for a bit, as she’d hit a wall with her latest creation, perhaps having something to do with her father going missing. Still, for today at least, she’d try and enjoy herself, even if she felt like a complete idiot compared to everyone else. She just hoped that no one would try and make a pass at her, knowing full well that she’d end up punching them in the face for it. A few hours of fun was all that she was hoping for.

Hearing her name being called, copper eyes would turn towards Imai, who was helping himself to as much food as he could shovel down his throat. It had been his idea for her to wear a swimsuit, which wasn’t all that surprising from his reputation. The perverted Ace was always after something and Brianna had a pretty good idea of what exactly that was. Well, he wouldn’t be getting any of her, that was for sure. Along with Imai was Mai, a young member of the guild who seemed to have no limit when it came to how much she could eat. The girl was a bottomless pit and seemed to always be filled with energy but Brianna had to admit that she liked that about her, Mai had so much spirit. The last member of the group was a brand new member, who seemed to spend all his time dressed in a full set of armour. She might have done the same thing had Imai not pestered her, having such a fondness for metal as she did. Maybe if things got bad enough, she could just summon her dragon scales and hide her form?

Approaching the Ace, she’d then perch down beside him and waste no time in helping herself to some of the free food. It tasted delicious and certainly suited her palette, resulting in her face finally lighting up as she dug in. “I suppose we should feast while we can. Who knows how long it’ll last with Mai around?” It was a dry joke but the only kind that the usually stoic slayer knew how to make. She’d then turn her gaze towards the knight and ask, “Aren’t you hot wearing all that? It must feel like an over inside there.”


Mai loved going to the beach. She had not gone often, but when she did, it was really cool! The splishy splashy water, the fwooshy fwooshy wind and the really squishy sand! All of it felt really fun and cool!

Too bad she was will stinky, smelly Imai today. Miss Luna had somewhere to be, and now Mai was with the stinkiest Imai in the world. At least it wasn't just smelly Imai with her, there were two other people that Mai did not really know, but one of them smelled good and the other one smelled like metal and looked like metal and Mai assumed he was not actually real.

Mai adjusted her swimsuit, making sure she was comfy, looking around and immediately locking eyes with the feast, not even realizing Imai had grabbed her hand and led her over to it. He handed her a plate, but Mai was not even focused on what he was saying. Something about everything? Well of course Mai was going to grab everything! She went down the line, her head barely poking above the table to see what was all available. Within no time, she had managed to stack food taller than she was, but of course leaving everything that looked green off of her plate. At the very end of the line, a tanned girl with a big chest and only wearing two coconuts and some grass put a weird flower necklace around Mai. Mai, of course, immediately tried eating it, much to the tanned girl's chagrin, telling her that it was a beautiful necklace to show to her parents. That meant Miss Luna! Of course Mai did not want to ruin a gift for Miss Luna!

She returned to where people were waiting, picking up a few more things for her plate along the way. A crab or two, a few seashells, an entire watermelon, and a sand covered popsicle, to be precise. Once she set her plate down, the plate somehow not breaking under the weight of all the food, she began to eat with a smile. "This is all my food, and I'm not sharing!" she indignantly announced, crunching on all the food from top to bottom, wolfing it down mostly without chewing. She continued this for some time, finally finishing up the entire plate and slapping her stomach. "Taaaasssstyyyyyyy..." she purred, laying down in the sun for a moment. She stared directly at the giant fireball. I wonder if I could eat that... she thought, staring at it with her mouth open, trying to eat it. Of course, it was too far away for her to eat. One day, however, the sun would meet its match. Mai Stormschild would eat the sun. It was her destiny.

But first, she wanted to go for a swim! She quickly popped up to her feet, rushing past everyone, her outstretched hands managing to somehow capture Brianna's arm, dragging her unwittingly into the water. Mai had left her floaties off by the rest of the group, and that became a bit of a problem when Mai's running left her fully submerged in the water, almost pulling Brianna down below the water in her entirety as well. Only at that point did Mai realize that she was entirely underwater and she panicked for a moment before remembering that she knew how to swim, at least somewhat. She kicked her tiny legs up, popping up above the water with her tiny head, staring at Brianna. Mai giggled and shot a little bit of water at the weird girl's face from her own mouth, most of it just being the sea water, but there was a little bit of her magic within it as well. She kicked up with all her strength, trying to stay above water and mostly succeeding, though she would occasionally dip below the water line for a few seconds before popping back up. "Let's swim together!" she called out, splashing a bit of water towards Brianna with her hand, the little distraction from keeping herself afloat dropping her beneath the water once more, popping up a second later with a childish grin on her face. Maybe she could use the floaties, after all... 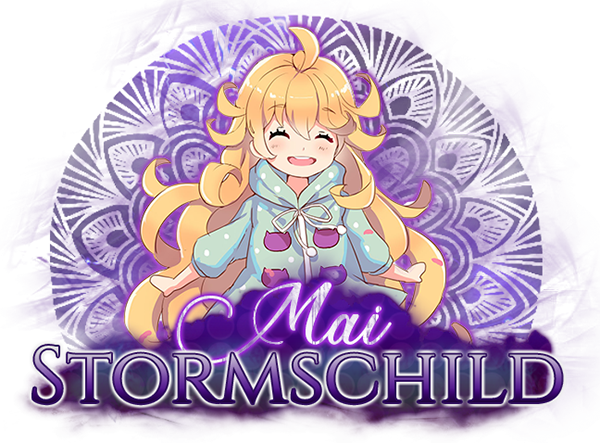