Will it be easy? No; Worth it? Absolutely 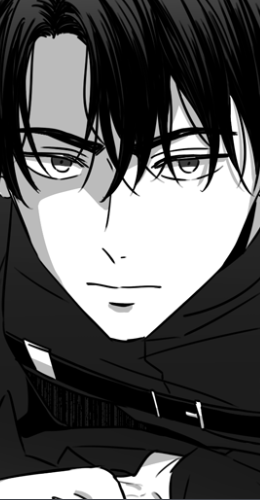 Just when he thought he had finally figured his feelings out for better or for worse, Percy did what he always did and almost dispelled Leon's anxieties with a fresh point of view of his own. For someone who didn't have a lot of confidence in their words, he had a way with them.

"No, that's...! That's not—I..." Leon was quick to try and deny the things Percy was saying, but couldn't. He couldn't say anything at all, actually. He could only listen as Percy continued to sift through all of Leon's worries, their fingers intertwined as they sat there on the cabin patio.

Even now, when Leon wanted him to be angry with him, call him out of his name, or even agree with the things he confessed, it was like it was out of the question. Percy had already made up his mind about how he felt about him, and that much was certain when three words slipped from his mouth.

"...What?" Leon suddenly lifted his head to face Percy, a look of surprise in his pink eyes. All he said was 'I love you', but it made his heart pound harder than usual. It was both firm and soft as the words rolled off his tongue, and it felt as if his sobs had paused for just this moment. It seemed like such a silly thing to say, really. Looking back at it, their romantic confessions of 'liking' each other were understatements. Everything they did and felt for each other was nothing short of pure love and devotion, so he shouldn't have felt so light and fuzzy when he said it out loud—but Leon felt it anyway. For a moment, he had completely forgotten about his troubles, and all he could see was Percy. All he could feel was how hard his heart beat for him, and how it became harder to breathe when he stared at him.

At first, Leon was at a loss for words, staring at Percy like a deer in headlights. However, after a couple of passing moments, Leon turned his head away, burying his eyes in his other forearm as he tried to smudge the tears away.

"...Y'know there's no take-backs, alright? You can't take that one back," Leon squeezed Percy's fingers as he tried to stifle his tears and hide his small smile, glancing back at his lover just in time to look him in the eyes, "...You too. I love you, too. A tonne. Mmgh!" That had been a long, agonizing few moments of dual deer-in-headlights. The instant Leon said 'What?' Percy had frozen and forgotten to breathe. How he could feel like his heart was both racing and stopped at the same time was concerning, but he was more interested in Leon's response, which for a second he thought was going to go badly. How devastating would be it for Percy to say something like that and be rejected? His mind raced and he had a little bit of a gay panic moment like back at the Singles Event, where he wanted to bolt and not look back. His lover turned his head away and Percy's heart sickeningly sank. How could they both say what they'd said to each other and done what they'd done since the night before they went to the frontlines and slipping the L-word ruin it?

But then he spoke and they met eyes. It was as if the pair had swapped places for a moment. Percy had become the instigator and Leon was the shy one hiding his face, but he ultimately said it back. "You scared me," the young man gasped, his strength leaving just long enough for him to collapse forward and press his forehead into Leon's shoulder. "Yeah, n-no take-takebacks," he mumbled, only now feeling his shyness creep up his neck. He thought his face was going to burn off, but he was smiling like an idiot. Without looking up again, he held up his trembling hand with the cigarette still squeezed between the first and second fingers. "Will you light this, p-please?" he asked, figuring now would be the best time to try and settle his nerves. He could smoke and dry Leon's tears until it was time to either go back to bed or make breakfast. Will it be easy? No; Worth it? Absolutely

Leon couldn't hide his small smile any longer when he saw Percy gasp like that, his eyes full of anticipation as he reciprocated the ginger phrase. Honestly, it'd be even weirder if Leon didn't feel the same way about him after everything they've been through. All of those times they told each other that they liked them was really putting it lightly, after all.

"Pft... yeah, hold on. Here," Leon chuckled, fumbling through his other pocket to snatch a cheap plastic lighter, flicking it till the flame flickered, and held it to the butt of the cigarette. Leon didn't like cigarettes for two simple reasons—because of his experience with Alphonse and because smoking was simply too unhealthy for his liking. But he didn't care anymore, or at least not right at this moment.

He was sure that he totally shot himself in the foot by picking up this habit in a moment of desperation, but that was a bridge he'd cross later. Another bridge he'd ignore for now was the ring box, deciding not to bring it up now. It wasn't like he didn't have all of tomorrow to bring it up or all of the day after that.

"Ah—" Leon abruptly perked up after a moment of silence, noticing how his face was damp with tears and how it left his skin feeling sticky and sweaty. Slowly, he glanced over at Percy again, his eyes much more at ease than they were minutes before. For the first time in a while, he felt a sense of peace amidst the war in his head. After all, he had his pillar and the love of his life right there beside him.