A place to belong 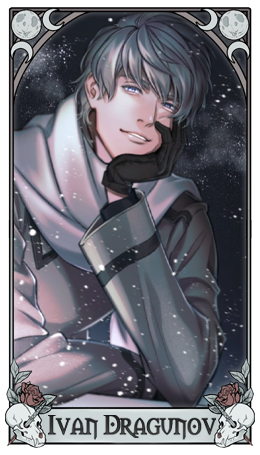 Angel With A Shotgun

A place to belong

The sun was showered it's golden rays down a small and cozy town. An elderly couple looked up at their house listening to the rhythmic hammering coming from the roof top. The elderly woman called out "Ivan, dear.... would you like to come down for some lunch?" A tall young man peeked out from the roof top with a hammer in his hand.

"I am almost finished with the repairs Mrs. Greyson... I'll come down and join you two as soon as I finish this task" Ivan called out smiling almost as brightly as the afternoon sun. There was a certain cadence and flow in the way Ivan spoke, it was a clear indication that he did not come from Fiore. Truth be told, Ivan was indeed not from Fiore, in fact it had been a few weeks since Ivan had arrived to the mystical land of Tolgalen. The Greyson's were a kind elderly couple that happily took Ivan when they had found him camping at the outskirts of town. Ivan returned their kindness by helping out with the house and chores, he had spent the last few weeks repairing anything broken in their home. Ivan's diligence was easily seen, in the few weeks he had been there the house looked brand new.

The elderly couple had taken likening to the young man and even considered him to be surrogate son of sorts, Ivan grateful to the couples kindness, he too came to consider them as parental figure. With the Greyson's help Ivan was able to warm up to some of the other locals, on his spare time he would help those who needed help repairing damaged toys, gizmos, and trinkets. This made the Greyson house busier than usual, however the elderly couple enjoyed the company that Ivan brought.

One Ivan had finished repairing the leaking roof, Ivan climbed down from the room to join the elderly couple for lunch. Soon enough Ivan was enjoying a wonderfully prepared meal by the elderly couple. Together they looked as if they were family.

"Mr. Greyson since the roof is repaired, is there anything else you need help with?" Ivan asked eagerly before taking another bite from his meal.

"Well son.... you've been a great help to Rachel and I.... hell, you've fixed up everything in this old home of ours... but if ya still are lookin for some work to help out... there is an orphanage not to far a walk 'ere..." the old man replied back. Ivan paused, tensed up for a brief moment at the mention of the orphanage.

"I-I see... I am not so good with children...." Ivan laughed nervously as he looked down at this plate meekly. Rachel noticed Ivan's change in his demeanor she smiled trying to ease Ivan's nerves.

"Ivan... you don't need to if you don't want to... George here was just suggesting. But... I'm sure they could really use your help, dear..." Rachel smiled as she reassured Ivan.

"Boy... I hear that the orphanage is owned by a kind, and beautiful young lady...if you're lucky you may run into her... maybe even charm her my boy!" George chuckled as he watch Ivan blush in embarrassment.

"George don't tease the boy... but I will say this... the young lady is quite pretty.... if you do decide to stop by there... just tell them the Greyson's sent you" Rachel laughed as she gave a playful wink.

"A-alright... I will stop by and see if they need any help" Ivan said meekly like a son embarrassed by his meddling parents. After chatting and spending some time with George and Rachel, Ivan packed up his tools and headed to the orphanage.

The walk didn't take too long, it was about 15 minute walk from the Greyson's house. Eventually Ivan arrived at the doorstep of the orphanage. He took a deep breath and mustered his courage before knocking at knocking at the door. "Erm...h-hello? T-the Greyson's sent me here to ask if you needed help fixing anything?" After knocking he, took out a small music box and a small screwdriver and began tinkering trying to distract himself from his nervousness...

Re: A place to belong

Through The Soul
Does the Power of Rebirth Lay
It had been a busy day. Honestly, saying busy would have been a bit of an understatement, it had been a storm of events the first thing in the morning. Aliannah hadn't expected an influx of children to the orphanage, but considering the war she really should have known. She had been running around tending to crying kids and counting and recounting the heads of the children that were now staying at the sanctuary.

There were more heads than beds. The blonde had tried her best to make sure that the orphanage had always more beds than they thought they needed, but the number of kids that were arriving thanks to the war were far more than she had expected. Taking in a deep breath the blond ran her fingers through her hair and pushed it out of her face, a sigh escaping her lips. She was honestly on the brink of tears, she was stressed and her heart hurt from seeing all of the kids that had to suffer losing their parents. She could do all she could, but there was no one in this would that would be able to replace their parents.

Her head fell slightly, the blonde strands of hair that she had just pushed out of her face falling back into their previous places. She couldn't show this side to the children, they were already on the edge of tears themselves and she had to be strong for them.

The angel took in a break and she raised her head, holding her breath slightly before releasing the breath and standing up from her crouching position. She had been busy all morning, taking care of the new children, feeding them hungry mouths and trying to find places for everyone to sleep. She was glad though that she had previously made a garden behind the kitchen so, it helped expand the budget that they now were once again pushing against.

She knew that she wouldn't be able to do everything on her own, find a way to make beds for the new kids cause it wasn't in their budget to buy new beds, perhaps she would be able to make bunk beds, that would help solve the space problem, they would have to add on an extension to the main house to fit all the new bodies, luckily some of the kids were able to say with some of the adults that were watching over the sanctuary, but there were new kids coming every day.

The knock at the door had the girl freeze in her spot, was it another couple of kids being dropped off by the government she wasn't sure she could taking more crying faces.

Aliannah braced herself as she put her hand on the knob of the door, opening the door with a weary look in her eyes and a brave face on.

She looked ragged, her hair messy with slight bags under her eyes from lack of sleep, it was evident that the blonde hadn't had much sleep in the last couple of days, yet despite this the girl glowed slightly, her heavenly magic seeping off her skin trying to heal her faster than she could destroy her own body.

But rather than teary eyed kids there stood a blond male who was tinkering with a music box, offering his assistance. Oh.

The woman visibly relaxed and slumped slightly against the door frame. "Thank Gods." She smiled slightly at the male and motioned for him to come in. "My name is Aliannah, we could absolutely use your help, I'll have to thank the Greysons later for sending you our way. How good are you with your hands?"