You are worth more than second thoughts and maybes 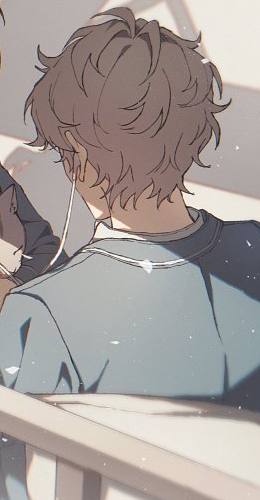 Earthland was an exciting place. At almost every stretch of the world, it was teeming with people and culture, places and natural wonders, danger and safety. This world was any photographer's dream, and Gideon was ready to taste all of the flavors Ishgar had to offer.

It hadn't even been three days since Gideon arrived in Fiore for the first time, and while his first task was to find a guild to join, he ended up getting swept away by the exciting activities in the few towns he's stopped in, but his next stop was Sakuramori.

The city was bustling with the chatter of Fiore's youth, and Gideon was strolling down the cobblestone pavement with his out and a charming smile on his face. He snapped photos of cute girls eating cute things, and merchants selling their oriental goods. He walked and walked until he stopped by an alleyway, where he heard someone rustling in its dimly lit path.

While it was probably easily missed because most people never really looked up, there was an aerial pirate ship floating above the town nearest the beautiful but strange forest. Its anchor was attached to and damaging some stranger's poor chimney, but Theo hadn't really considered what exactly his anchor hit when he used it, since that wasn't something you thought about at sea. The Jello mage wasn't exactly known for thinking things all the way through, just like how he'd gone alone to the aforementioned strange forest even though last time he'd been there he'd had the wits scared out of him and murdered a murder of crows...and then cried. This time hadn't been much different. There were still mischievous ghosts and other paranormal stuff in those pretty woods, so his Silver Wolf Quest to fetch a rumored artifact had been wrought with terror from the start. It was only the fact that he was an ace that kept him from giving up, and now he regretted it deeply.

The artifact, found deep in a cave under a glowing lake, was thought to be either the source of some agitation that made the supernatural entities more hostile or, at the very most, might be the cause of the forest's weird hauntings entirely. He was to get it and bring it back to the brains of the guild to look into, as was his whole point for living these days. However, the urn-like object he grabbed seemed to be something a bit in between the theories. Not only did it draw nearby ghosts to him, but it made those ghosts drunk and able to possess him. He'd been wondering ghost-drunk for twenty-four hours before he was finally released, and now he had escaped the forest and was running from more party ghosts through the town itself, trying to get back to his ship but forgetting where the rope ladder was. "AAAAIIIIEEEEEE!!" came an increasingly loud screech, and then Theo rocketed out of the alley and into the man stopped there. "GHOSTS! DRUNK GHOSTS!" he yelped, eyes brimmed with tears as he tried to use the stranger as a meat shield against the mob of literally thirsty spirits grouped at the opening of the alley, something the pale-haired man was likely unable to see without touching the urn that Theo had in his satchel. "Can you see them?" the black-haired man hissed, icy eyes wide and wild. He looked quite deranged, especially since his navy tracksuit was even dirtier and wrinklier than usual due to staggering around the forest. "They see you..."

You are worth more than second thoughts and maybes

'Oh, what a good time to be alive!' was what Gideon was chanting in his head right up until he heard the most horrific screech coming from the alleway.

"E-Eh!?" Gideon flinched and looked into the alleyway with a look of panic on his face. After all, it was hard to stay collected when you heard some terrible scream coming from a dark alleyway. But what was even more terrifying than the sound was the event that happened afterward. Between all of the noise echoing from within, someone finally burst out of the darkness with such awesome speeds that they almost became an afterimage. But that wasn't all—he was coming straight for Gideon.

With little time to react, the color drained from Gideon's porcelain skin and his azure eyes widened to reflect the fear he was feeling. But even as he turned away to make a break for it, he wasn't quick enough to escape the bullet that was after him. His heart pounding and breaths wild, when the person latched on to him, Gideon realized what was happening. So that's what this was—a mugging! A rather bold one considering it was in broad daylight, but a mugging nonetheless.

Being the chaotic and adventurous he was, Gideon felt a little thrilled when he came to this realization. After all, it was just like that famous saying that someone probably said at some point; "What good is a trip to a new country if you don't get mugged and violated (maybe) at least once within the first three days of you stepping foot in their borders?" Whether or not someone actually said that—maybe his aunt—or if he was just trying to justify what was actually happening, Gideon was equal parts excited and terrified nonetheless, and there was one strategy he learned for situations just like this!

"HELP! RAPE! RAAAPE!" Gideon yelled with a higher-pitched, more effeminate voice than what he naturally had. It probably wasn't the most textbook strategy of dealing with muggings, but if there was anything the charming man learned from girls he had come a little too hard on in the past, it was that everyone unanimously paid attention to whoever screamed "rape" the loudest. To be fair, the silver-haired man did really think he was getting mugged. It wasn't until he heard the person speak of ghosts through his screeching that Gideon paused on his theatrics and looked at him with a look containing equal parts anger and bewilderment. "RAAAP—wait what?"

For a second, Gideon stopped squirming and violently flailing about in the person's grasp to actually get a good look at them. It was a young-looking man who was about as tall as Gideon, had icy blue eyes, and the appearance of a hobo who lived in a bush. His clothes were filthy and tattered, his eyes glossy with tears, and an overall unhinged look on his face. Yup, all of the ingredients were there—Gideon was dealing with a hobo with a crack addiction, and all of this talk about ghosts was him hallucinating. And it was obvious that it was a hallucination because when Gideon turned over to see just what "ghosts" he was on about, he saw nothing but a dark-ish alleyway.

No longer puzzled, Gideon was left with nothing but anger for being grabbed so suddenly. Visibly upset, the silver-haired man wiggled one arm free and pushed his hand into the hobo's face, trying to pry him off.

"What the.... okay, look! There's nothing there! Let go of me now!" he barked back at him, "You can't just grab people willy-nilly! Let go!"

Despite the man's screams and obviously disturbing implications, Theo merely gripped onto him harder and screamed back at him. "RAPE? WHERE IS THE RAPER? RAPIST? I'LL PROTECT YOU, JUST CALM DOWN, SIR! I'LL JELLO 'EM!" Theo hollered in his most heroic tone, for just a moment calling back to his Rising Star days before he devolved back into the crazed treasure hunter he truly was and continued his "AH" and "AIIEEEE" noises as his face caught elbows and his hands struggled to keep his wiggly meat shield in place. It never occurred to him that he was the attacker the stranger was referencing, though clearly nothing like that was actually happening.

More stunning to Theo was when the silver-haired man suddenly stopped screaming and squirming. The treasure hunter likewise quieted like the calm before the storm, peering into the other man's appraising face with visible confusion. He sniffled and tilted his head, half wondering if somehow looking at him would make the issue at hand more clear, but then he suddenly got a hand to the face. "ACK-- OW, STAHP!" he yelped, his vigor renewed as he became that much more stubbornly attached to the only thing standing between him and some stressed out spirits.

"My name isn't Willy Nilly, it's Theo!" the Silver Wolf ace protested, unfamiliar with the phrase since he'd spent most of his life in Desierto. "Wait, is your name Willy Nilly? That's a silly name. Silly Willy Nilly-- HEY, WAIT, DO YOU SERIOUSLY NOT SEE THE GHOSTS?!?!" he swerved back to the point at hand hard enough to cause whip-lash, new tears filling his eyes. Maybe this guy had to touch the ghost keg? Yep, time to touch the ghost keg. Somehow he wrangled the artifact out of his bag as they struggled and pushed it into Willy's hands, an unwise move for someone who was supposed to make sure it got safely back to the guild, but no one ever accused Theo of being very smart. "Now look. SEE 'EM?" he asked, having now unwittingly allowed this innocent bystander to become possessed by ghosts as well.