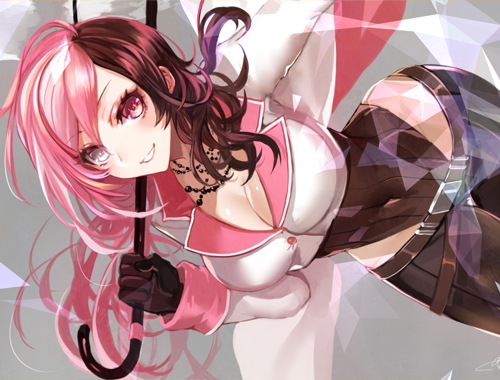 The pain was unimaginable. It took everything Trinity had to keep from crumbling into a broken madness where she quivered and shook on her knees, clutching her head and wailing in agony. She had spoken Nathaniel’s name, pleading for him to help her, to save her, and he did not disappoint. The young woman had been too blinded by the painful spell to see as much, but the blonde man had quickly pushed past his injury to throw himself at Scrooge in a furious rage, hacking him to pieces brutally until he was dead and the magic -- and the pain -- had stopped.

Trinity gasped deeply as the torment faded, a wash of relief pouring over her and leaving her shaking and exhausted. She fell forward until she was braced on her hands and knees, gulping down oxygen in ragged breaths as her body threatened to give way to hyperventilation. Tears poured freely down her face as she sobbed openly. It was all too much for her. Wasn’t her life already difficult enough? And now, after finally seeing Nathaniel after weeks of him giving her the cold shoulder, after finally getting the chance to tell him the truth about what she suffered, the moment had been ripped away before it could begin. The fighting, the bloodshed, the chaos, the anger, the confusion… She couldn’t take it anymore!

Just as she was beginning to sink into a deep despair, she felt strong arms wrap around her and pull her close. Nathaniel had rushed to her almost immediately after slaying the awful old man, dropping to the ground and holding her tightly against his chest. She could feel his chin on the top of her head, the warmth of his body against her own, the rhythm of his chest as it rose and fell with each breath. Trinity practically collapsed against him, burying her face into his neck and crying for all it was worth, no longer able to hide or control the stress and anxiety that she had been stuffing away all this time. Thankfully, with Nat there, it didn’t feel as overwhelming as it usually did. At the very least, she didn’t black out. That was something to be grateful for.

She wasn’t sure how much time had passed as they sat there in the snow holding one another. Eventually, her tears began to slow and somehow they managed to decide that it was best for them to go somewhere more private to calm down and talk things out. Still sniffling, the couple made their way out of the festival and deeper into town, looking for any place that could be suitable. Trinity’s pretty black and white santa themed dress was a mess, covered in dirt and grime from the snow, and blood from Nat’s injury. Eventually, they came across a hotel. Wearily, they booked a room for the night, more concerned about getting cleaned up and having some peace and quiet than propriety.

The room was simple enough, a decently sized space with a queen sized bed, a love seat, a desk, and a dresser with a lacrimavision sitting on it. There was an attached bathroom as well, stocked with cleaning and hygiene supplies as well as clean towels. Despite how badly both of them needed to wash up, Trinity didn’t even glance in the direction of the bathroom when they got inside. Instead, the door closed behind them and she simply stood there just past the doorway, her head hung sadly as she wiped tears and snot off of her face with the back of her hand. There was a depression settling upon her shoulders, a deep seeded air of sorrow and hopelessness that was always a part of her life but never really on display. By nature, she was a very happy and innocent woman that loved life and everything in it, but that innocence was constantly being stripped away and tainted by darker parts of her life that she couldn’t escape and didn’t understand. How could she even begin to try explaining it to him? She had talked to Ehoron about it once, but that was so long ago now that she couldn’t really remember how she’d approached it. Re: Closing the Distance

Nat had lost track of time. He wasn't sure how long he had held Trinity in his arms. It felt longer than their surroundings would suggest as everything and everyone who was there to bear witness to the fight were still there and in the same place they have been prior. He tried to hug Trinity tighter but the slightest movement to do so sent shocking pains all throughout his body which originated from his wounded left shoulder. It would appear that the wound has widened and he had only now noticed after all the adrenaline pumping action from earlier subsided. Blood began to trickle down from it, and he didn't want to get any more of on Trinity so he decided to pull away.

The woman of his life decided that they should go somewhere more peaceful. Though he wasn't told this directly, it was clear from the actions she was doing. Their search lead them deeper in to town where they had found a nice cozy inn. A bit sleazy for Nat's taste but it more than did the job of getting a long rest as the privacy was more than welcome. In fact, the silence of the place brought back some of the initial agenda he had for seeing her today.

They had finally been given a room. Nat stood in front of Trinity who had stopped just past the doorway. The were both evidently and completely exhausted. Their clothes both desecrated with smeared dirt, snow, and blood. Nat's own clothing which were his usuals topped off with the sweater he had made felt as if it is becoming hard and stiff from the substances. He finally gave a sigh of relief  and Nat wanted to go back to the matter at hand. Why did the magazine said she was a Warlord? And why did the picture look like Eliza instead of her? Are they related somehow? And most importantly, why did she ghost him? They were getting in to some very hot topics indeed and the uncomfortable clothing is a bit distracting. The room however was nice. Very cozy indeed. It distracted him from the distracting clothing he had on, the offset quite humorous. However, Nat had been using every defense mechanism known to humanity in order to sanely cope with such existential questions he had right now. Of course, the fact that the room being homey as it is reminds Nat of the room in his own home. Especially the bed. And for some reason, the seat. It probably was because of the fact that his technical first time was on a sitting furniture. Thoughts began rushing back to him. Of that one fateful night. The seeming catalyst to all of this. Yet it was mixed with other objectively better emotions. Truthfully, had the circumstances been different he would have enjoyed the entire thing. But no, before he gets to any of that peaceful bedding without consequence, there are things that must be cleared first. And with a deep breath, he returned his thinking to the present reality and what needed to be done. Nathaniel had to make sure that he, as his friends would say back in Dies Irae, did not put his peepee in crazy.

He noticed that the place had a bathroom which Nat thought was perfect, he could refresh his body as well. Probably even take the remaining icicles out. And just after he had taken the ugly sweater off, Trinity touched him gently where the wound was. She didn't say anything, she didn't have to. At this point, Nat had gotten pretty good at having an idea of what she was thinking. The touch, the eyes, the face, she was really worried. Nat placed a hand over hers and whispered that he was ok. "I'm just gonna change and get rid of the icicles. Then we'll talk." he continued gently. The hand he had placed over hers would slowly and gently lift it up and then he gave her a small smile before heading in to the bathroom.