Octavia will be waiting outside of the spooky Forest, leaning against the tree you humming torso with a bright smile on her face despite the area being overall creepy and not a pleasant place to be at all. Most people would steer clear of this Forest hearing rumors and treacherous Tales of things that are unsightly and unfortunately in this place. However today she was meeting up with someone, today she was meeting up with the I pick up her tails help her with a job that she had taken on for this exact reason. Apparently a group of Thieves had been hired by a cult that lived in the forest to steal an, artifact, something magical MacGuffin that increased your power if you drink from the bowl Yadi Yadi yada… personally the details were lost in Octavia, which is something we should say is a Bard Octavia, which is something we should say is a Bard but she wouldn't bounce the part you didn't know where learn about it along the way. Hopefully this person whoever they may be would have went inside than her on what this MacGuffin did. Actually waited she started to wonder about the type of person that would be joining her today, she had to wonder if they were some nobleman who would protect you from danger, or they were the serious brooding business type who had a long dark history didn't play by the rules. We may be better both who knows or maybe none of it either way she was almost excited already forming words in her head even though the job hasn't even started yet. Maybe this is also a way for her to take her mind off the eeriness of the place she was in. Being rational thought she would only perk up and look over to see someone approaching her from, perhaps this was the one she was meeting either way she stood up and we'll get ready to beat the stranger. She didn't want to be rude after all. 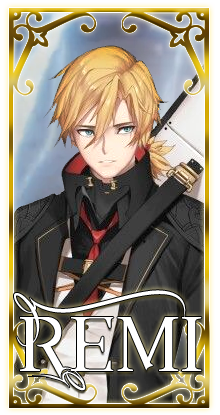 Given the rather apt name of the place, one would think that Remi would have some issue with going inside. Sure it was rather dark and his eyes kept darting at the shadows doing much the same, helped by the sun peeking through the canopy above. No problem that every so often he would have to stop and take a moment to look around, just to be sure he was alone. Why wasn't it a problem? Because the blond-haired mage was having the time of his life. His first job as a mage! It was so exciting it would almost be skipping if it wasn't for his armour. Not to mention he was feeling stronger than before magically like he was finally starting to make some progress. Life was good and not even a spooky forest with a nasty cult inside could get him down! From what he was told idiots like that were a dime a dozen and he didn't really expect much trouble. But first, he had to find his... companion? Partner? Associate? Temporary traveling and ass-kicking companion.

After stopping to check his map once more Remi took a turn on the path and saw a woman. Moving forward he walks up to the stranger, taking half a second to look her over. Between her clothing and look jewel says that she was the one he was looking for. Somewhere in the back of his mind he briefly wondered why every single female mage he had met thus far was at the very least cute. The active lifestyle maybe? He spoke politely to the lady, giving her a half bow as he spoke, the excitement making him forget to curb some habits, his Minstrelois accent showing through as well. "Bonjour mademoiselle! Would you happen to be the mage I was supposed to meet out here? For the job?"

As the man came over to Octavia she could already notice him looking her over, not that she cared, she dressed how she dressed and was a bard so she always had people looking and sizing her up. She did the same to the stranger briefly but watched his approach more watching how he carried himself more then anything.

Octavia stare the man and looked a tad surprised at his greeting, she giggled slightly and nodded, there was a charm to the greeting but would return with a nod at first. "Yeah thats me, my name is Octavia, the pleasure is mine, and yes I am the mage here to assist you on the job" she paused a slight bounce to her step though she didn't move from her spot. She was genuinely happy to meet the man and was even more eager to learn about him, not in a weird was but over time, She looked the man up and down, he looked very capable...yes, yes he was so this could work well for them both. She nodded once move the bouncing stopped as she nodded a firm nod.

She was then quickly spin on her foot in the point triumphantly towards the jungle "Alright then let's go forth and find this...this…" She paused then spun her heel facing him tilting her head slightly chuckling slightly. "So what exactly are we looking for...again...hehe" she said. Whether she actually knew all the details about the mission or not, she was curious about what he knew about there job, the more information the better, especially from his perspective. She had to admit she only skimmed the job flyer, but she knew she was going to find a magic item and stop a cult of some sort thats been bothering the citizens of a nearby Town. She stood there looking at him waiting for his reply.

Raising an eyebrow despite himself as the woman introduced herself Remi smirked softly, briefly reminded of a few girls he had met before. Shaking off the thought before it got too distracting he took half a second to do a quick once over of his gear and weapon once more. He was still adjusting to using his swordplay and magic in concert and relished the opportunity to test out some ideas on opponents that would actually fight back. Committing her name to memory Remi smiled as he moved to follow her. "You may call me Remi, it's a pleasure to meet you, Miss Octavia."

Looking over to her as she speaks again he frowns softly, crossing his arms as he turns to look at her fully. Personally since this wasn't some 'save the world' situation he wasn't too concerned with it all. Enough to take the job seriously, but not enough for him to think Octavia and himself were in more danger than a typical job. "Well, I believe it is some kind of crystal or something. I was more concerned with dealing with the cult first. Easier to look around when we don't have to avoid any guards or anything right?"

Turning his attention back to the forest his eyes linger on the pair's surroundings for a moment before meeting her gaze again. His typical grin is replaced with a more sheepish one.  "Honestly this is my first job as a mage. Unless we get in over our heads we should be able to handle ourselves though right?" Holding up his left hand he flicks his wrist and releases a bit of magic. The wind that could be felt shifting through the trees changed direction, lightly going back the direction behind them. "From my studies, animals tend to pick up scents on the wind, so I figure making sure we are always downwind from anything nasty in there might be a good idea."

Octavia watched smiling Slightly as the wind picked up and hid there scents, she wasn't sure earnestly if it would help her not, but it means he put thought into what he did at least, a very promising start. So she nodded and spun on her heel again. "I bet it will help, and as far as trouble is concerned...eh we will figure it out, if there is one thing I got going for me its my "impeccable impovskills" so let's go!" She said as she walked in. She had said impeccable improv skills in a deep accepted voice to fully muse some light hearted goofiness. While she liked to focus on the task, all work and no play wasn't her style...she liked to have fun.

As she started to walk through the forrest, there was a eery vibe in the wood, normal people would be scared and wouldn't have entered, but Octavia was a adventurous bard and she had a seemingly capable mage with her, so this Forest was nothing for her, just the setting. She looked back at her companion "So Remi...tell me about yourself...why did you join the guild you did...what made you wanna find treasure, whats your favorite color?" She asked shooting off some questions smiling and chuckling a bit more now, however she kept her pace so they can find these cultists.

As she waited for his answer she was keeping aware of her surroundings the best she could, though you would never guess she was doing so. She fancied her self light on her feet, after all it be embarrassing if she tripped in a root or some nonsense after acting so confident. So she kept going eager to learn about her partner, the more she knew ew the better it be for later.