I like being low-key. You'll see me when you see me. 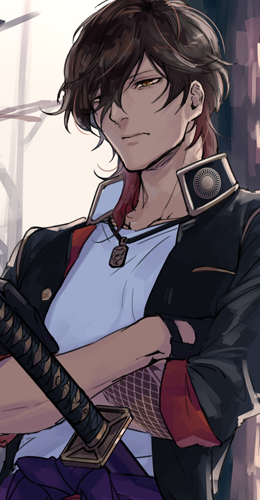 Going to a foreign country was always a daunting experience, especially if you meant to settle there. It was like scaling a mountain for the first time, or going to see a movie you've never seen before. The journey was a mystery but the destination was clear, and you'd never really know if it really lives up to your expectations until after you've run the mile.

Such was the case for Ignacio "Ignis" Capricho, one of the many sons of the esteemed Capricho family—a name founded on their several successful wineries in Ca-Elum and Enca. Over the years, they had built up quite the reputation for themselves, but that was all relative. Recently, they had decided to expand out of Ca-Elum to the other Ishgaran countries, and Fiore was but one of their growing pursuits. It was going to happen sooner or later, so it was no surprise that the Caprichos was finally going for it.

It really just so happened to be Ignis to be the one they decided would take up their Fiore branch. He was twenty-five years young, reliable, hard-working, and frankly, he wasn't really doing much of anything in Ca-Elum nowadays. His life was easy, and between the lively members of his family and the drug cartel he had kept under the wraps for years, his life began to feel stagnant, as if he were gazing over still waters without a single ripple. Moving over to Fiore seemed like a good getaway, and it was his honor to push the family name across the border. Easy enough, right? Well...

"Tía, if something were really wrong, I'd call you... yes Tía... how am I supposed to know what those two are doing? It's not like I keep tabs on them. Besides—" Ignis suddenly made an exasperated sigh as the voice on the other end of the iLac suddenly began blasting so much that he had to pull the iLac away from his ear, rolling his eyes, "Yeah, yeah. Everything's fine. The place is almost done being furnished, so I need to go. Yes... yes... bye."

The tap of a button ended the call with his Aunt Sofia, who always had this protectiveness that sometimes became overbearing and naggy. Honestly, it hadn't even been a week and it was just non-stop phone calls from her and some of his other aunts as well! Ignis had devoted himself to getting the winery set up as quickly as possible, so he hadn't had the chance to settle into this city. It was just phone calls and reports with construction workers—hopefully, things would chill out once it was all over, or else he wouldn't know what to do with these constant tests of patience.

God, it feels like she'd never stop if I don't hang up first. What a drag... Ignis thought to himself as he pulled a small carton of cigarettes out from his pocket and plucked one between his lips as he groped around for his metal lighter. He was standing outside of Capricho Winery, letting smoke float out of his mouth as he watched a company of men haul expensive-looking furnishings from trucks into the building.

Ignis rested on a fine line between standing out and blending in. He was decked in very dark and solid fabrics, with most of his features hidden beneath his milky-chocolate locks or his baseball cap. From afar, he looked quite ordinary. But as people approached and passed by, it was easy to see some of the finer details in his appearance for what they really were. He sported a crisp charcoal cap, short-sleeved dress shirt, slacks, and sandals. His gloves were thin and onyx, and the tail of a dragon tattoo coiled around his left arm. His eyes were like honey and his skin was like toffee. His ears were heavily pierced, but he only seemed to wear simple and minimalistic studded earrings and the necklace that hung wasn't anything special, but he wore it very well. All in all, he was quite the catch up close, but he didn't look particularly approachable.

Disinterested in his bustling surroundings, Ignis continued to puff his cigarette as he observed the winery finally begin to take shape. Once it was furnished, he vowed to take the day off and open in next week. He needed time to settle in, right?

Thwump! Ignis perked up when he felt someone small and thin bump into him, and as if his neutral face wasn't already unapproachable, the narrowing in his eyes surely didn't help.

"Hey, watch where you're going—" Ignis began, but stopped himself from completing his thought when he looked down. It was a freckle-faced boy wearing a tee-shirt and a leather jacket that seemed one size too large for him. When he realized this, Ignis relented with another smokey sigh, "You're just a... whatever. Look where you're going next time, kid."

"Sorry, mister. Didn't see you there," the young boy responded, looking at his feet.

After that particularly critical comment, the kid did as he was told and passed by. He was smiling for some reason, and while Ignis found it a little weird, he didn't think much of it. He returned to puffing his cigarette, thinking about how he'd spend his afternoon once this was all over. Was setting up shop supposed to be this exhausting?


Kyra looked at the text on her iLac and sighed. She was hoping Anya was waiting for her right at the city limits of Rose Garden, just so that the auburn haired heiress would not have to wander around the city on her lonesome. Rose Garden certainly was a beautiful town, though. Perhaps the name of the town was as a recognition of its beauty? No, that did not seem likely. Either happenstance or people within the town trying to live up to the moniker. Either way, there certainly were worse places to be left alone. Looking around showed a number of familiar looking companies. Le Boutique Seudisant, Lisbeth's clothing store, looking glamorous as ever, maybe even moreso while sitting in the aesthetic of Rose Garden. Alisa's own company had a store of Saria Tech further down the road. That said, one in particular seemed a it busier than the rest. She had not recognized the brand, though it certainly seemed to have the money to afford a well sized store. Capricho Winery, and judging by all of the trucks rolling in and out of the area, it was fairly new.

Kyra was disinterested initially, yet soon she found herself nearing the store at the sight of a small, grungy looking child bumping into the man standing in front. Kyra waited a moment to make sure what she saw was the truth, and once she noticed the kid sorting through the wallet, she made her way over, blocking the kid's path.

"E-excuse me," she said, trying to keep a smile. "I-I don't believe that wallet is yours." The kid merely glared at Kyra, trying to escape the interrogation to no luck. "Don't worry, I won't hurt you. I just want you to hand the wallet over and... well, I'd assume you're not exactly in the best living conditions, huh?" Kyra sighed, pulling out her own wallet and handing the kid a large bill of Jewels. "Here, so you don't have to steal. If you want to earn some more legitimate money, go to that store over there-" she pointed at Le Boutique Seudisant. "-and tell them that Kyra Velkhomme sent you. I'm sure they'll find something for you to do."

The kid gave a suspicious look at Kyra before exchanging the wallet for the cash. Kyra sighed, glad to take care of that issue, heading over to the man in front of the store. "E-Excuse me?" she quietly mumbled when she got close. "Y-You d-dropped your wallet, s-sir. A-and sorry i-if I'm being t-too forward b-but..." She was preparing to chastise his smoking habit when her voice choked up. "N-never mind, I-I'll just go now..."

I like being low-key. You'll see me when you see me.

Ignis continued to puff his cigarette in front of the store, watching as his workers moved the furniture into the building. At first he thought that he might've been too harsh on the kid considering that the relentless phone calls he'd been getting from his family was starting to get on his nerves, but whenever he recalled the boy's smile as he passed by, he suddenly felt no remorse for his commands. Well, in any case, it wasn't his problem anymore—or so he thought.

Ignis seemed cooly caught up in his own head before someone else approached him from behind. It was a young woman with short, reddish-brown hair, gentle red eyes, and fair, unblemished skin. She seemed to be slightly taller than the average woman—perhaps five-foot-nine or five-foot-ten—and didn't look older than twenty-three. By appearances alone, she looked like someone who took care of herself. But, what was perhaps more noticeable than her appearance was her speech. The moment she opened her mouth, she lost her cadence in an almost irritating stutter, fumbling over every other word as if anxiety were swallowing her tongue whole.

At first, Ignis didn't speak to her, only staring at her with his sharp, cold eyes with an expression that made it seem like he didn't want to be bothered with anyone or anything. Still, he listened to everything she had to say.

Ignis's expression only seemed to sour even more when he was told that his wallet had gone missing. He could feel the foul language on the tip of his tongue, but before he could say anything, he stopped and rolled his eyes. So, it was that kid from earlier, huh? There was no doubt about it, and the smile he had toward the end of their conversation made more sense now that he knew that he was just pickpocketed. What sort of warm welcome was that?

The dark-skinned man blew smoke out between his lips, plucking the cigarette from his mouth so he could speak properly to the woman who had informed him, but suddenly struck with indecision, she tried to make an abrupt exit from their encounter.

"Uhh... right, but..." Ignis watched her with this dubious look on his face, brows rising by the woman's confusing behavior, "You're not leaving with my wallet, are you?"