The Adventures of Research and Dispatch

The Adventures of Research and Dispatch

Through The Soul
Does the Power of Rebirth Lay

Out in the field one gets relatively dirty, actually not even relatively dirty, just plain old dirty. Grime under her fingernails, twigs caught in her hair, and scratches along her arms and legs that never last long; but they leave dirt where they were supposed to be nonetheless. Working on the Relocation and dispatch team had Aliannah working in the mud and dirt nearly all the time, capturing and relocating animals, monstrous plants, and other things that seemed to be harmful or invasive to nearby homes and families.

At present Aliannah looked a bit of a mess, her hair was in somewhat of a rats nest and in her arms was a small injured animal that she managed to save from a nearby attacking beast. The girl was trying her best to calm the whimpering and shaking animal in her arms, whispering words of affirmation and consolation to the small animal. She wasn't sure what she was going to do with the animal, all she knew was that she was supposed to take it to the rehabilitation and research team. There were some scratch marks on the small mammals leg, lingering some sort of festering of the wound inflicted by the large beast that Aliannah had relocated.

She wasn't sure what the beast had coated on it's claws to deliver that kind of reaction, but she knew that whatever it was it wasn't something that she was prepared to handle. It wa likely best to take it to the other department and see what it was that had happened and to get information to be better prepared for it next time.

She strode down the hallway, past several doors, looking in each one of them to see if there was someone in there that she could talk to. It was honestly more empty than the blonde would have imagined. Biting her bottom lip she looked in the last door, hoping that there would be someone there.

To her joy here was someone! Inside was a blond male, he seemed to know what he was doing and Aliannah hoped that that was the case. "Hello! Um.. I'm from the Dispatch team and I... uh... picked this little guy up on my last relocation trip and he's got a couple scratches that have some sort of poison or something on them that I think came from the beast. Do you think you could look at it or do something? I don't know where else to take him." The blonde looked slightly downtrodden as she offered out the little creature in her arms.

Re: The Adventures of Research and Dispatch

It takes grace to remain kind in cruel situations 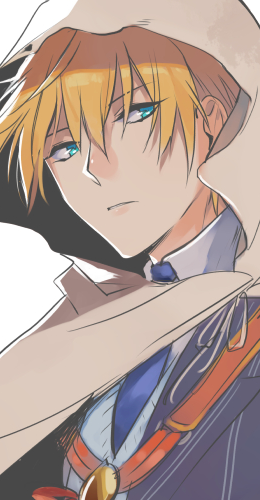 What would you do if you were suddenly thrust into a world without the skills to succeed in it? How could you navigate a society that felt completely alien to you? For most people, they had parents or guardians that spend years preparing them for these hardships and trials, but not everyone had that. For twenty-two years, Ling had lived in a quiet forest, where the green groves and thick thickets were the roofs over his head, and the fruits and vegetables that grew in the comfort of the woods was the food on his table. The woodland creatures were his friends and family, and he was content with that. He wasn't alone, but still, from time to time, he felt lonely. He watched civilization exist from afar, witnessing as many of its ups and downs as he could from that quiet little forest of his, wondering when he would ever muster up the courage to go meet them someday. Well, that day came faster than he could have ever predicted.

For one reason or another, the poachers that had been trying to infiltrate that forest for years had finally succeeded, and it all burned to smithereens as a swift result. Ling lost his home, and many of his friends and family died in that cruel process. Just like that, the blond was thrust into society, without being able to read or write, nor with the social skills to compensate for his illiteracy. But with the help of Pimwadee, Mathis, and Dagda, he was able to find a place in the world for him right here in Meliora Vitae.

He may not be able to read or write, and he was so atrociously shy that it was almost comical, but his ability to speak to and understand plants and animals along with his natural healing abilities made him a great fit for the "rehabilitation" part of "Rehabilitation & Research". Growing up among a wide variety of critters and plants gave him a vast amount of knowledge regarding their health and well-being, surely enough. There were natural remedies he knew how to make, and mixtures he could create to solve very specific health problems, magical or not. He was like a doctor without a degree, and he was doing a good job for someone who sold himself short all the time.

Still... who cares about all of that if I can't even talk to people? Everytime someone from Dispatch comes to talk to me, I totally freak out! Ling was hunched over a worktable somewhere on the S.S. Endeavor, mindlessly grinding distinct-looking plants into a mortar. He was in a room connected to a small indoor enclosure, where you could view it through the floor-to-ceiling windows that circled around it. It was mostly for smaller critters, and Ling ended up spending a lot of time here, tending to them. It's so easy for everyone else... all I'm good at is grinding stuff, and anyone can do that! It looks so natural for nice girls like Pimwadee, and super cool guys like Dagda and Mathis...! Useless, useless, useless... Ling began to grind the plants harder and harder as he fell back into his typical self-degrading inner tangents, a gloom over his boyish face as he hunched over the table until someone unfamiliar came in.

"Ah!—Oof!" the blond flinched when he heard the woman approach him, smacking the crown of his head against the cabinet above him. He was a jumpy man who was easy to frighten, even if you didn't mean to. He knelt down, sympathetically rubbing the top of his head with both hands as a painful sting ran through his skull. His cheeks were flushed in pink now that someone had seen him do something so embarrassing! He really just wanted to crawl under a rock right now. "Ouch, ouch, ouch... uhm... sorry! I-I... didn't hear you come in, so..."

Ling stood up again, trying to avoid looking at this woman in the eyes. He always struggled with making eye contact with how shy he was, but working in this department always demanded talking to Dispatch frequently. Now that he thought about it, he had never seen this woman before. He had only glimpsed at her, but she looked like an absolute mess. In her arms was what Ling thought to be a baby Wolverine, and just as she said, its wounds seemed to be on the verge of getting infected, if not already.

When she held the critter out, Ling cautiously accepted it into his own. Animals seemed to be comfortable with him, for one reason or another, wild or domestic. It embraced him like a koala bear, and with a closer look at its wounds, it was clear that it was some type of poison. Thankfully, it was still treatable in this infant stage.

"Er... th-thanks for bringing her... but your hair..." Ling looked up at her through his blushing face, his pretty emerald eyes fixed at this woman's messy locks before he immediately looked away, "Sorry! I shouldn't have said anything!"

Re: The Adventures of Research and Dispatch

Through The Soul
Does the Power of Rebirth Lay

So, maybe she shouldn't have called out so loudly to the boy at the table as it seemed that chaos reigned down on him for a couple seconds as the boy seemed to jump out of his skin. Light indigo eyes couldn't help but watch the little bit of a meltdown the other boy was having with a blank face. Wow, that reminded her of Elias. She recalled the first time that she had run into her now best friend, he had gotten himself into a situation with a bunch of wolves and nearly gotten himself killed. So, maybe this wasn't that bad, but the way that the boy acted was very similar, a but of a stuttering mess. The blonde couldn't help but smile to herself. It was cute. "It's also on my end, I probably shouldn't have been so loud as to startle you."

The girl smiled brightly as she handed to little critter over to the other. It seemed like the man had an affinity of some sorts with the animal as it settled immediately in his arms where as compared to hers, where it was biting and clawing at her. It had only managed to settle down a bit when it realized that she wasn't going to release it, even then it was still very stiff and hissed at her a whole lot. A pout grew on her lips. That wasn't fair.

However, it was curious, the entire time the other hadn't met her eyes, not to thank her or greet her. From her pout her lips formed a purse of curiosity. Who was this guy? She was sure she had seen him at the first gathering of the guild, but not much since. It seemed like he kept to himself quite a bit. She wouldn't judge him for that, but it seemed like a bit much.

She watched him for a bit as the man handled the animal with experience and care. So, the little creature was a she, the least she could do was tell genders on animals and that would explain some of it. From what little she knew of animals, females were more commonly vicious than males.

Oh. The girl stalled. Green, such pretty leafy emerald green. His eyes were beautiful. Her face went blank for a moment before the words that he had said registered in her mind. "O-oh! No, no, don't worry about it! Thanks for telling me! Honestly because most of my cuts and bruises heal almost right away I forget that my hair doesn't do the same!" The girl laughed and ran a hand through her hair, picking out some of the twigs and leaves that her nimble fingers found as she combed through it.

When she felt like she had gotten most of the debris, the blonde looked back at the man as he looked over the animal. "What is she? She is a girl right? I might not know a lot about animals, but I can tell genders, I think." The girl looked over the man's shoulder, not getting too close as to not startle him again. "What happened to her? Was it poison like I thought it was? Will she be okay?" Remembering something extremely important the girl backed away from him and stood up straight. "I'm so sorry for being rude, my name is Aliannah, what's yours?" The girl smiled brightly at the other, maybe she could finally put a name to the other, she was sure that she would be seeing quite a lot of him.