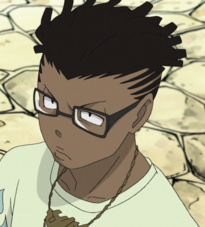 “Interior design has never been my specialty.” Sabu sighed deeply as he looked at his very plain dorm aboard the S.S. Endeavor. “I wouldn’t even know where to start.” Sabu walks over to the bed and presses his fist into it. He’s surprised to actually see a fair amount of cushion in the bed rather than it feeling like punching sandstone. “Strange.” He plopped himself down onto the bed and lay there for a moment. “I’m not a fan in the slightest.” While Sabu was grateful for the accommodations that were made for him in his room it felt foreign, as if he didn’t deserve a place so clean and comforting. He needed a fix to make this room feel like home. Immediately he begun to search the room looking for anything that was stone or sand adjacent that would feel familiar. Sabu was moments away from giving up his search when he peered outside his window at the ground below. “It might work. Only one way to find out.”

Sabu made his way down to solid ground while the S.S. Endeavor was stationed over a beach front. With a sizeable container in hand, Sabu begun to shovel sand into the container.  As he is heaving sand into this container, he thinks to himself, “strange, but at least this feeling is familiar.” A memory flashes through Sabu’s head. Lux and Sabu laughing together as they gather bunches of sand in the labor camp in order to make pseudo-beds and cushions. Comfortable furniture? Not at all. But it was all they had, and it was familiar.

One container of the sand was not nearly enough for Sabu’s liking, so he repeated the process of going to the beachfront, gathering sand, and depositing it into his newly appointed dorm room. Until the point where he had a mini desert aboard the S.S. Endeavor. Sabu looked down at his new sand-covered floor and admired his handiwork. His proud smile softens as he leans down into the sand and forms the sand into a makeshift bed shape and piles sand to rest his head on. He turns to his side and upon realizing that the space next to him was empty, forms an identical sand bed to his left. “You’re here in spirit Lux, even when you can’t be here in person.” Sabu removes the crude drawing of Lux, from his book and places it on the second sand bed and gets up from his floor. He looks down at his outfit to see that he is covered almost head to toe in small sand particles. He chuckles slightly as he dusts himself off, the sand falling to the ground and disappearing into the floor. “Just like old times.” He takes another deep sigh in as he examines his redone room. Mostly untouched to how it was before, with all the previous furniture remaining in their original places. Only now, a gigantic mound of sand covers the floor, with two makeshift sand beds, one housing a crude drawing of a girl with a wide smile. “I’m not excited to explain why I’m tracking sand into the ship, but we’ll cross that bridge when we get to it.” Sabu chuckles and closes the door to his dorm to join his guildmates.