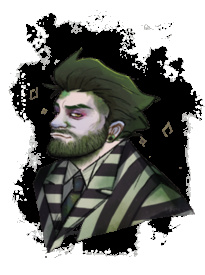 The camera on the iLac flashed a constant red light, indicating that it was recording. The ghost demon known as Crowlee quickly pulled his finger from over the camera, revealing his horrid face as he grinned at the camera. “What is up, Crowlee’s Creeps? That’s my name for my fans by the way, get it trending on Twitter and… do you characters even have Twitter here? Never mind. It’s ya boi, Scary Penis, looking to drop an exciting new live stream for y’all to get excited and share all over the ...lac...net. Does every piece of technology have ‘lac’ in its name? Needs more creativity. Anyways! I’ve been in contact with a company lately about one of their products, the Roan three-strand twisted sisal rope! I explained how big of a fan I was of their product, even if it’s a cheap roleplay forum ripoff of a real thing, and they were quite excited to hear from me! Apparently they’ve been looking to get ‘influencers’ out in the world to help raise their sales and asked if I would test it out! Oh boy will I! But rather than just stand here and give a boring, single frame review of it, I decided that it was way better to test it out in the real world. So here we go!”

Crowlee reached up towards his face and then, in a motion that would certainly frighten and astound people, he grabbed his nose and pulled it forward, elongating the entirety of his face into an atrocious, art-style looking expansion of his features. Then he brought up his free hand, which was now holding what looked like a shotgun of some kind. The demon ghost waggled his eyebrows, as best he could, and then started to move, the sound of a door being kicked in echoing out through the camera. “ALRIGHT EVERYONE, THIS IS A HOLD UP. HANDS IN THE AIR, PANTIES ON THE GROUND!” the ghost demon cried, suddenly possessing an accent that was more  commonly known from the south. Crowlee than shot the gun in his hand into the air, blowing holes in the cheap ceiling above. Several cries of terror and panic echoed beyond the camera’s gaze and the ghost demon quickly turned it around so those watching could see all the innocent people getting to the floor.

“So cool, right? Who even does robberies anymore? I miss the twenties. Everyone keep your hands where I can see them, we don’t want no heroes in here!” Crowlee moved through the crowd on the ground, looking over them carefully. “Hmmm… alright! Everyone get to their feet, stand up and line up for me!” the demon ghost barked, causing everyone to quickly rush to get up. They all fell into a line of sniffling, crying NPCs that were terrified to lose their not-really-existing lives. Crowlee inspected the line and then nodded. “Good enough!” With a wave of his hand, several cords of rope appeared, breaking through the ceiling’s cheap plaster and wrapping around the metal foundation underneath. The ropes then wrapped around and formed nooses as they dropped down and fell around the innocent bystander’s necks. With a twist of his hand, Crowlee tightened the noose on every person, causing several panicked cries as people tried to reach up and grab the rope to pull it off.

But in another grand gesture from his hand, the ghost demon pulled everyone into the air by the rope, yanking them off their feet and suspending them. Screams and cries became gargled, choking sounds as every person was hung. Crowlee panned the camera over the quickly blue-ing faces of the people before he turned it back on himself, adjusting his placement so the legs of several of the others could be see. “As you can see, Roan’s three strand twisted Sisal rope has all the durability anyone could want in a rope. It’s sturdy and efficiently wraps around without issue!” Suddenly one of the ropes broke behind him, dropping one of the women to the ground. Crowlee glanced back, looking up at the ceiling and then down at the woman. “But it seems it has a… three hundred pound weight maximum, I would say? What are you, three hundred pounds?” he asked the woman, receiving no answer. Snorted, he leveled the shotgun with her and pulled out a shot, blowing her brains out.

“Rude. Anyways, I would give this product an eight out of ten, so long as you aren’t trying to hang any fat ladies. Buy Roan! Well that’s all for me, guys. Imma ‘hang’ around a bit longer to make sure these skinsuits bite it and then I’ll skedaddle. Keep an eye for another video! Crowlee out!”