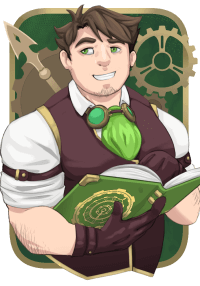 Teresa was still sitting in the back of the wagon, her nose into small book and on the bottom next to her were a few pamphlets, as they hit some kind of hole or bump. She cursed softly as she bounced around through the cart, hurting her bottom in the process, barely holding onto her book. Her nails dug into the wood trying to hold onto something, almost breaking a few in the process as they latched underneath a nail. “Youmhuuhhauhehhauhehah” She mumble yelled to the driver of the cart as she sucked on the tips of her fingers.

“What happened? Are we there yet?” She asked as she momentarily removed the fingers from her mouth and trying to see the driver through the haze of pain. “No, we just drove through something. Hold on, I need to check my cart.” He replied grumpily, as he jumped out of the driver seat and began to circle around the cart slowly, cursing in a language Teresa pretended not to understand. “Ok, let me know if there is anything I can do.” Teresa replied stoicly as she bend forward and picked up her book, before collecting the pamphlets. She was just folding them to put them in her pocket, when she heard the driver curse loudly and in rapid succession. “Anything wrong?” Teresa asked as she continued to fold, ready to exit as she already suspected what happened. “You can say that! The axle is broken.” The gruffy driver replied as he angrily kicked the big metal wheel of his wagon.

With a sigh Teresa jumped out and quickly glanced over the problem. The axle had broken exactly where she had predicted it would break. Even from the start she knew how bad the wagon was and the driver had not exactly looked too honest either. She had heard- heck she even pulled some of these schemes for money. However she did not have much choice.

The silver eyed witch had been sitting at the bar, just minding her own business and drinking it dry. Luckily -or unluckily depending on whether you asked her- she had not gotten too far yet, when the order came in. Apparently a guild member had requested help in a town called Morgate. She had never heard about it, but was told she was one of the few available at the current moment who could go there. Teresa had been just a tiny bit slightly intoxicated enough to take that as a compliment and agreed to go there. Somehow she had finally managed to get hold of a cart and the guy had reluctantly agreed to take her there.

Apparently it had been a rush request or something. She could not really recall much of the details if she was honest. On the way she had picked up the book and some pamphlets about the town.

By the time morning had come she had sobered up enough to read them and she now had a pretty good idea why she was told to go. She could create a personal shield against the radiation. “Oh right and something about cutting me of if I did not make some money to pay for my bar bill…” She muttered as she suddenly remember a flash of what had happened last night. Groaning she pulled out a bunch of jewels from her pocket and threw them at the driver. “Here is the down payment I promised. You can collect the rest at the Silver Wolf guild.” She said with a chuckle, before turning her back and walking away.

Immediately she shrunk together and groaned, as the chuckling amplified her growing headache.

If she recalled correctly the guild had a list of such scam artist and with a bit of luck they would recognize the guy and take him to the Rune Knights. If she played her cards right, perhaps the reward money could be deducted from her bar tab.

Before the driver got any weird idea’s she picked up the pace and set out to create some distance between them. As soon as she got enough distance and was hidden from sight, she sank through her knees. The next hour she spend nurturing herself to health. She conjured up a healthy, very fatty meal, drank plenty of water and down a couple of pills to subdue her headache. Most importantly she cooked up some coffee and by the time the priceless black liquid had vanished into her tummy, she felt stable enough to continue the journey.

Luckily the breakdown had happened not too far from Morgate and by the time the afternoon sun reached it’s highest point she saw the edges of the city rise from the horizon. “Well I guess I’d better wait at the edge of the city.” She said as she snapped her finger and drew the sigil to activate her skin shield. A little blue glow formed around her.

As she approached the city she could tell there was radiation, just by looking at the vegetation, but her shield seemed to be doing fine. There was also enough magic/aether in the air so she could draw in more then enough and did not have to worry about it running out.

“Now… I wonder who this Ozwald guy is.” She said as she reached the outer edge of the city and sat down against a building. “Oh well, time for a little nap.” She said with a grin as she pulled out a cigarette, lit it and than closed her eyes as she inhaled deeply.