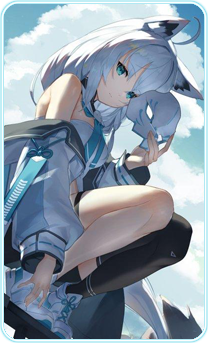 For Shirakami Yuki, their freedom was their primary responsibility. The welfare of others and the environment was secondary. They were immortal, which made survival pretty easy. However, it was still necessary to secure their free reign over their own movements. Mortals, the yokai had found, were quick to restrict free movement between their so called nations. Lines drawn in the sand that would vanish and warp in less than a century. Right now, Yuki would abide by their international travel decrees. They needed a passport in order to maintain the ability to travel without breaking human laws. Not that they cared too much about those. Now that they wanted to join a mages' guild, they had to watch their behavior. Unless it was a very free spirited organization that cared not at all for those type of transgressions, Yuki could easily get in trouble. For these reasons, they were waiting in the queue at Hargeon Town. It was a very long line. They could see far down to the passport office. People were nearly lined up around the block.

According to what they hard heard through the grape vine, there was so much bustle because of the recentness of everything. The borders opened only in the past month as a sign of peace between Fiore and a few other countries. These were Seven, Bosco, and Minstrel. Personally, Yuki thought if they went to Bosco as a friendly ole tourist, they would probably be the victim of a kidnapping attempt. Judging by the news at least. It wasn't fair to judge the entire nation based on bad reviews essentially. However, they ran on their instincts, and staying under the radar was usually good. By remaining undetected it meant nobody would be looking for them if they were squirreled away. That could be both good and bad.
« View previous topic · View next topic »