Seas of Gold and Green Lands 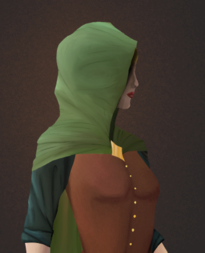 Seas of Gold and Green Lands

Close to the woods where Yingvi lived was a town located, the town of Hargeon. She did not come into the town often, only when necessary. At one of these outings, she saw a poster. "Help wanted! Come and help me plant seeds for a good harvest!" It seemed that one of the farms was in need of assistance with his harvest. She could use some extra money, it is not like she has a real job anyway. The farm was easy to find, located in a beautiful, peaceful place. The forest, where she lived, was visible in the distance and looked mystical from the farm. But this was not the reason why she was there. “Hello, is anyone there? I am here to help with the planting.” An old couple appeared. The farmer explained that he had hurt his leg badly when he was ploughing his fields. This meant that he was not able to sow his fields. He gave her all the necessary equipment and of course the seeds.

This year the big fields would be sown with grain seeds and the smaller ones with potatoes. Before she could begin sowing, she needed to ready the old plough. The smaller fields still needed ploughing since the farmer hurt himself there and was unable to finish. So she went straight to ploughing in order to ensure that all the fields were ready for the seeds. Once ploughed it was time to sow the seeds. The grand fields were up first and turned out to be an easy job. Yingvi had a basket in her hands filled with seeds. With every few steps, she would throw a handful to her right. She did this at every row until all the seeds were sown. The smaller fields were more work. On hands and knees, the potatoes were planted. For every potato, a hole was needed where it could grow. After placing the potato, the hole was covered with dirt and Yingvi could move on to the next one This took the whole afternoon. It was sweaty, filthy and hard labour, but it did not bother her. When she was done she went back to the couples house to talk with them. They were grateful for her work and gave her dinner and a reward. She enjoyed the job immensely as she had helped a poor farmer and his while working outdoors and connecting with nature. If a similar job would be offered to her in the future, she would take it in a heartbeat.

Some months later she was walking from her beloved forest towards the town. She stopped to look at the view. Seas of gold and green lands. That was the view she had of the farmers’ fields. It was a magical scenery. She walked to the front of the farmer's house where she saw that the old man had fully healed and was setting up all of his harvesting equipment. The couple saw her and waved while chanting: “Thank you, dear!”