The Enemy of my Enemy (solo) 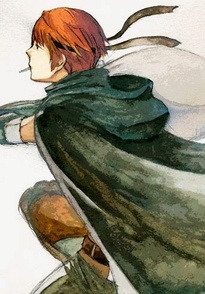 The Enemy of my Enemy (solo)

Music: Mashup by AmiasD
This notes section will scroll if needed!
Naphtali exited the dark mage dive bar with his back hood pulled high above his head, and bunny mask covering his face. He had arrived in Cedar a couple hours ago and was already on the hunt for some information on the newest thorn in Elysium’s side. He had been sitting in that bar for a hours, waiting for someone to drop a clue for his new job, . Naphtali had just finished his first mission in Motor City, and had received word of that the council, of all people, had requested aid from any mage legal or otherwise in the pursuit of the newest crime syndicate to rise up in Fiore, Nos4a2.

Normally Elysium would be a fan of any group of thugs and misfits that took it upon themselves to take down members of the governmental authority. However, this group had also decided to get in the way of some of Elysium’s affairs, and that just could not be tolerated. So, if that meant Naphtali had to look around and feed a little bit of information to those annoying Rune Knights, and get paid by them to do it, then he would be happy to “help.”

Even if he was working for the council, this mission already felt better than the last one. He felt much calmer with his mask on, less chance of someone noticing him, and with his intricate ties to the dark magic world of Fiore, there were high odds of someone from this new organization recognizing him. Hey, dumb ass, you sure we’re on the right track Paresse pestered as she hovered invisibly behind him.

He wanted to tell her that she could go her separate way for a little while, explore the city on her own, but sadly he needed her. Lepus, as strong as she was, wasn’t very subtle. If they needed to fight, he would need it to end quickly and quietly, so Paresse was his only option for a fight.

“Yes, I’m sure. The man at the dive bar was certainly a goon of theirs,” The man had been quite drunk, and had gone a little rant about how great the last accomplishment of “Nos4a2” was. This guy must be a freaking idiot.  Did he not see the wanted ad that the council put in all of the newspaper? Or does this guy just not know how to read?

“He probably saw it, but he was drunk at a hangout spot for dark mages. He probably doesn’t think that one of his own would be out to get him.”

He let out a sigh as he turned into an alleyway, ignoring Paresse who continued to throw vulgur language his way.

“Shh,” Naphtali hissed, there he was.

Oooooo, did you spot our illiterate goon? She chuckled, letting in a comical gasp as she pointed towards the man. We did it Tali-boy, we found Waldo!

Naphtali merely let out a sigh as he watched the man drunkenly stumble up towards the brick wall marking the end of the ally. Had he trapped himself on purpose?

“This doesn’t feel right… Somethings off,” Naphtali whispered to Paresse, watching the man fall forward into the wall, and begin knocking on it.

The man reached into the pocket of saggy, tan pants and took out a spall spray vile, spraying it into his face. He shook his head, almost as if he was exiting a daze.

“There we go,” The man groaned, lifting up his hand, and pressing down on a medley of bricks. It must have been some form of sobering magic, but that wasn’t of any real concern to Naphtali right now. A bright purple light filled glowed between the cracks, and the wall bricks began to fade away one by one.

“Paresse, grab him,” He whispered.

The man turned his head towards the sounds of speedy footsteps behind him, only to be greeted by a black and red horned woman just inches before his face. Before he could even let out a word, one of her giant hands had wrapped itself around his face. Her knee quickly rose, slamming itself into the goon’s gut.

The man spit up some bile and rolled over onto his back. Paresse placed her foot over his neck, preventing him from speaking as Naphtali walked up towards him.

“I’m assuming this is where Nos4a2 has been taking residence here in Cedar.”

The man starred up at him, gasping for air. Naphtali turned towards Paresse. She slightly lifted up her foot, letting the man catch his breath, “I don’t know *gasp* what you’re talking about”

“Of course you don’t,” Naphtali said, bending down, opening the man’s mouth, and pulling out his tongue. “So this 42 printed on your tongue combined with your loud mouthed story telling don’t equate to you being a member?”

The man’s eyes widened as Naphtali let go of his tongue and stood back up. “I-“

Before the man could let out a word, Naphtali kicked his head as hard as he could. The man’s eyes shut and his breathing slowed.

“oooooh, did you kill him?” Paresse asked in excitement.

Paresse de-materialized and Naphtali made his through the brick wall, quietly moving down the stairs. There were a few goons here and there, but it was too dimly lit for anyone to really see a man covered by a pitch-black cloak who creeped along the walls.

Naphtali had arrived at what appeared to be a weird mix between a jail cell and a hospital room. A man laid in a room made of 3 brick walls and a door made of iron bars. A red, glowing stream of liquid flowing out from the man’s arm into a strange floating lacrima which hovered above the man’s body.  Armor was scattered around the man’s bed, but it was unmistakably that of a rune knight.

Naphtali crept up to the man, noticing that he looked quite sickly. It appeared that quite a lot of blood had been drained from this man’s body, but he was conscious enough to notice a tall man in a bunny mask.

“You’re not one of my usual visitors.” The man weakly joked, “I don’t take it you’re here to rescue me, are ya?”

The man shook his head.

Helping a Rune Knight just didn’t sit all that well with Naphtali, however he wasn’t a big fan of murder. Perhaps that would change after. Little while longer in Elysium.

He helped the Rune Knight up from the bed and grabbed hold of the Lacrima. It wasn’t that big, just a bit bigger than a tennis ball.

Paresse reappeared in front of the two. The man had already passed out from blood loss, but He was so weak and fragile at this point that Naphtali could carry him over his shoulder with ease.

“You’re not going to kill him? Are you f***ing kidding me?!?” Paresse complained, letting out a sigh and shaking her head in disapproval. “You really are a pussy.”

“I saw 4 men on my way here. Hopefully they have all wondered off, but if we run into them I need you to take them out. I won’t be able to go as unnoticed while I’m carrying this man.”

“Yeah yeah yeah,” She teased, walking forward, and guiding them outside.

They had made it outside without any trouble, no one had seemed to notice them.

“Well that was boring,” Paresse complained.

"Thank... you..." The man began to wake up and looked up towards Naphtali. “Chief Beifong… I got here... a few days ago to look into Nos4a2... She tricked me... She’s-" The man began to wheeze. His body was starting to shut down. "She's the head of their cedar operation… Please… Put a stop to her.”

Those were his last words. His breathing had stopped, and his hand fell limp.

Paresse began to cheer out of disrespect, but Naphtali ignored her. He reached into his pocket, pulling out the lacrima that had effectively killed this man. He gripped it tight and slammed it against the ground. Red, glowing blood and glass splattered everywhere.

“Paresse, let’s go regroup at the inn. We need to come up with a plan.”