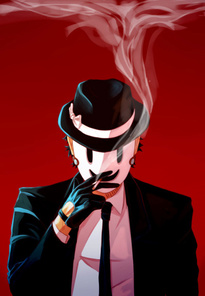 Walking Alone in a bustling crowd of many unknowable faces is a mask-wearing lone Man in his trusty stitched lab coat, wandering by many a group of passing strangers, not any of them noticing the oddity that he wears a blue marble ring-octopus mask, with leather straps keeping it attached on his face, that man is Doctor Sunshine and he is currently sent down up high from phoenix mountains, His guild "Silver Wolf" sent him for one mission alone, To Get a Passport.

The Doctor’s journey to the seaside town of Hargoen town was made much more easier getting down from the mountains rather then up them, though the salty breeze air, the smell of cooking seafood and the constant chatter of townsfolk didn’t really excite the good Doctor, and instead along he’s very way on the stone pathways of the street, he lets out one massive sigh of clutching disappointment and begins to mumble

“Remind me why I’m here again?”

Says the doctor with irritation in his voice, with his question returns a calm answer from his inner voice

(Have you Forgotten again? We both know you need to get yourself a passport, Doctor)

“But Why should I? because it’s “The law”

As Doctor Sunshine spouts it out in complete sarcasm

“I, Doctor Sunshine may have no need for a small piece of paper solidify in plastic to dictate where and not to go, the world is my oyster and Oysters make great seafood, and seafood is…”

The Doctor pauses himself, not knowing what to say next

“Where was I going with that? Honestly I’m just really having a famished craving for Oysters right now”

(Doctor you must be serious for this passport, if we as the individual don’t support Silver Wolf and not get the passport, we will only provide deadweight to the guild all together, also earlier before we left you could have at least packed something with you later to eat and I don’t think tha- Doctor, duck)

“Oh, call me a duck if that makes you feel more better than me”

“And I thought your better than that but NoOoOo, you just have to call me a fresh water aquatic bir- “

Suddenly realises what his voice means, his reflexes trigger inside of the Doctor’s body, he narrowly steps side-ways and Dodges out of the way from multiple speeding Wooden carts, after they speed off Doctor sunshine was left absolutely dizzy after being spun around from the sudden force, after getting his bearings Dr Sunshine looks down to the street of where they headed down

(It appears to be some wooden carts)

“Yes, I know that, but why was it in such a rush? I almost got servilely smashed!”

(Well it went down the same direction we are going to, so by process of elimination…)

“Wait…. DID THEY ALMOST RUN ME OVER FOR A PASSPORT?!?”

Doctor Sunshine erupted with frustration, a few bystanders hear Doctor sunshine’s shouting and decide to go the opposite direction where he is, Doctor Sunshine continues

“The audacity! Well the place isn’t to far ahead, I might be able to run over there if I am quick enough”

The Doctor Quickly runs down the stone footpath with the sounds of hard-hitting footsteps, after a minute of running Doctor Sunshine came across a small office building, gasping for his breath after sprinting the Doctor realises in front of it is a Massive line of people, and oh boy it is loooooooooong, ranging from a whole mile, Doctor Sunshine then notices some wooden carts stationed at the start of the line, this is the place and so Doctor Sunshine gets in the line at the very back, the problem is though

The Doctor groaned in annoyance, then a man further up the line shouts back “Oi, Shut up!”

The Doctor mumbles to himself

“This is going to take forever, how am I going to get past this line of agony?”

(Doctor, it hasn’t been even a minute yet, I suggest we should wait a little longer until w-)

Just then without hesitation Doctor Sunshine slapped the person in front of him in the back of the head, it was a very built looking and muscled monster of a man wearing nothing but a loin cloth, the muscled behemoth slowly turned around to look down at the Doctor from his massive Hight, while doing so the Doctor begins to take off his current octopus mask and holds up a new one, this time it’s a wolf’s mask as white like silver, with anger across his face the Buffed man moves his face closer to his face and reply’s in a stern and blood thirsty tone, while that’s happening many folk in the line stare behind themselves in anticipation that this could only end bad

As he finished his sentence, the Doctor casually puts on the mask, all memory of him and what he has done so far had been temporally erased, he then pipes up and points to an average person behind the big man

“It was him, let’s get him fellas”

The bulky man quickly turns around, facing down the t-shirt bystander and preparing a beatdown

“Wa- Wait wait! That must be some sort of mista-"

Before he could finish a massive fist meets his face and renders him into the cement, the whole line quickly turns into one massive brawl, spells being fired left and right, people getting flung over. It was utter chaos, just the distraction the Doctor needs as he avoids contact with the ensuring brawl and slip in through the front of the line, A mechanical operated voice calls “Next” and two revolving doors open up, grabbing the opportunity Doctor Sunshine walked in joyful to himself, while leaving behind the not so pleasant destruction he caused, doing so his inner voice speaks up

"Well at first I was going to use a strategic battle plan to lure the line of people away from the entrance, thus getting me in front of the line"

entering inside the building appears to be some sort of small lounge area with a pristine receptionist desk, other side of the desk appears to be a young woman around her late-teens, wearing what seems to be the magic order uniform, Doctor Sunshine made a bit of a history with them before, and not the best kind, hopefully she doesn’t know him too much otherwise this could be prove problematic, The Doctor then walks up to the desk and the women greets him

“Hello! And Welcome to the magic counsel passport registration, to travel across to EarthLand and Beyond! So first off you need to answer a few questions, is that okay with you?” She said while taking out a pen and clipboard

So far so good for Doctor Sunshine, He gives a thumbs up in response to her question

“I accept the challenge!”

After the doc responded The Women then quickly scribbles in her Clipboard while nodding her head "Ok, Age and nationality?”

His age was easiest to remember, but his nationality is a bit hazy and he is still a bit of a Stanger in Earthland, so he said the first that came to his processing mind

She continues squibbing in notes, this time more intense as if she is putting effort in each letter "Cool, cool, and finally your guild?” Doc simply points to the bright pink wolf symbol on his neck "Ah, Silver Wolf! You guys are always quite the interesting bunch” after finishing her intense scribbling she stands up from her desk and leads down to a small Photo Booth, "Finally we need to take your picture, after that we may finish your passport” Doctor Sunshine nods understandably, After an hour has passed, Doctor Sunshine with blood, sweat and tears receives what this whole journey was up to, Legal transportation, As the blond woman hands over his fabled passport glittering in the light she spoke to him apologetically

“I’m really sorry it appears we can’t get the picture right, somehow every time we take your passport picture your face is complete smudged out, there maybe something broken with our camera today”

“No no, it’s all quite alright, many thanks for the passport, madam”

He gives a friendly wave goodbye and walks out of the building, with his New and shining Passport, Doctor Sunshine sees the aftermath of the brawl, Destruction can be seen and the street is a mess as people are ether being taken away by guards or medical personal, overall a tab bit disappointing after missing the whole fight, it could be interesting to see who wins, well at least he got what he was sent for

“Welp, at least we got what we need in the end, right voice?”

(At What cost Doctor? At what cost?)

A brief moment of silence passes, until a sudden rumble can be heard coming from the Doctor’s stomach

Doctor Sunshine walked off on his very way to the nearest seafood place, feeling a sense of goodly goodness he can at least spread his metaphorical wings and cross over earthland and beyond, with brimming unlimited potential he can’t wait for the next adventure.

» Were going on a beast hunt (Featuring Dr Sunshine)
» A Thread Featuring Aizen and Brennan [Private/Aizenagi]
» No Sunshine When She's Gone [Job]
» Of Knights and passports
» Passports?