There was no way that he could feel safe here. Magic, even his Sacred Demon Slayer Magic, had no power in this place - the Neutral Grounds, where any and all truly were neutralized to this magic-less being. Since Jariel grew up with somewhat of a magical atmosphere - with all the jinns floating about near his home back in Desierto and whatnot - this was new to him. And with anything else that was new to the adventurer, he had to be cautious of it lest it surprises him with a hidden status as hostility.

But he came here for a reason; to even out the weakness of not having magic here. 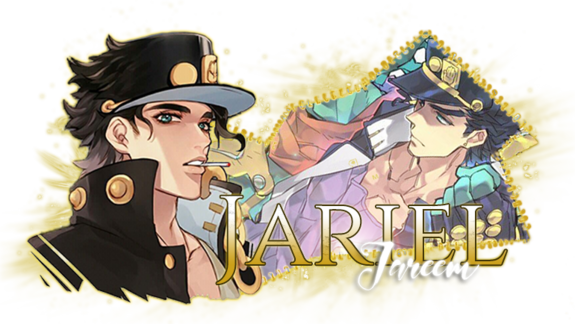 There was an announcement that caught his eyes when Jariel was returning from Hargeon Town where he got his passport. A gunshop was having a huge sale here in the Neutral Grounds, and while Jariel had never wielded such a weapon before, he was informed that it required no magic power to wield and use. If he ever got into trouble where his magic would fail him, why not wield a gun? It was fast, effective, served its purposes and wasn't heavy. Definitely better than wielding an axe.

He still had to find the exact gunshop, for they didn’t appear to be scarce in this strange town…

One of the gunshops appeared to have a multitude of different guns that shot out swords. Yes, swords. What kind of gun was able to shoot swords? Never mind that question; the real question was why? Why would people make a sword like this- no, a gun like this? It was so confusing... and yet, it kind of had a cool aesthetic to it that drew JJ closer. Shooting a sword from your wielded gun was usually far more destructive than throwing it yourself, depending on your own throwing skill and strength... but then again, it wasn't a real gun at that point, was it?

Nah, he needed a classic. Something discreet but true to the old ways of what a gun consisted of; a barrel to load bullets in, trigger and handle, perhaps a small optic or scope, and voila.

Another gun met his eyes. This one was coated in silver, a revolver-form and a work of art for the Demon Slayer. Hopefully, its shot was as impressive as its design, btu he would have to take that up with the gun-shop owner.

Picking up the revolver did grab the attention of the snoozing gun-dealer who approached him. “H-Hey, there! You’re supposed to pick up one of the holsters!” He quickly grabbed the advertisement product from JJ and put it back in place with a grin, “But I guess you really want one of these? Here, take one of the holsters and try it out… y-you do know how to wield and shoot with a gun, I assume?”