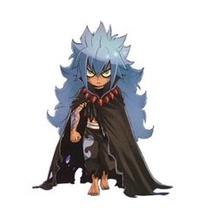 After what felt like a forever of wandering, Drako was ready to go home. Unfortunately, he couldn't do so until he had finished this job. He questioned why he had taken it in the first place. Was it the for the Jewels? No... The glory? While it may be nice, that doesn't really matter to the man, so that's not it. The item! That's it, it was the item! While he knew that he was going on a quest to find something, h e didn't know exactly what it was. Drako had realized it wasn't anything reality shattering, or else it probably would have been reserved for A or S class wizards, but none the less, it must be at least moderately important if it was to be returned to the guild master, so there was no way that he was going to pass up this opportunity! Although it was taking much longer than he had originally anticipated... The boy knew he was given two weeks, but he was expecting to be done with the job in a day, MAYBE 3 if he got lost... Which he did, a lot.
The dragon souled boy had spent 11 days here, he had trekked through forest, deserts, and even winter lands. He had attempted to avoid killing any beast, as he would hate to mess with the ecosystem of this area and would hate to accidentally wipe out the wild life with his poison. Still, some beast did have a few fist to the face coming. Needless to say, it has been a long and tumultuous journey, but Drako believed it was almost done. After taking to a few wanderers in some of the areas he visited, Drako had been able to figure out the cave's location. The endgame was finally in sight. After resting for the night, Drako had set off for the cave, and when he arrived, he was met by a 15 foot lion which just stared him in the face, as if peering into his soul.
"Youuu are not a normal human, I sense the soul of many old friends within you... And the soul of something truly evil... Who are you, and what brings you to my cave, and how did you get here?" The large, unsightly beast inquired of the young man.
"I am Drako. Drako Wranth Noking of the Fairy Tail Guild. I am here on a job, and I found your cave by wandering and asking around. It took much longer than expected, but I'm here now".
"I see... Well, if you truly desire what lies within, I hope you are prepared to fight. I have killed many an unprepared being who sought what lies within. Shall you refuse to fight, I shall slay you right here."
Drako nodded, a sign of acceptance of the terms. For hsi grand plan, he'd just stand there as the large beast was about to smoosh him with its paw. At the last possible second, when Drako was confident the beast's vision would be obscured by its paw, he'd activate his dragon takeover arms and put them over his head and draw his poison coated claws, and as a man that steps on a poisonous lego, the beast draw back its paw in pain and roared. Drako took this opportunity to run up to the beast and slash it, sending even more poison coursing through its mighty system. The beast however, was unhappy about this, and it kicked Drako away once he got too close, but the dragon boy was able to get a good swipe in. Knowing that it'd be best to finish this battle quickly, Drako would wait run at the beast, and knowing that it'd swipe at him again, which it did, he' latch onto it with his dragon arms and climb it as swiftly as he could. Once on its back, he would run his claws all across the beast's back, casing it to scream in agony forcing Drako to hold on. Knowing that the beast wouldn't be able to do much, Drako would claw his way up to the creatures neck and start hacking away. First, he'd slice the back of it, cutting into it with his posinous claws. Then he'd climb his way down to the front of his throat and start slicing at that. Drako could see its claw attempting to pull him off, but the poision coursing through it and the sliced throat gave the lad ample time to react. Once Drako was sure that the beast would go down, he'd book it to the cave and grab McGuffiniest object he saw. After 3 more days of wandering, Drako would make it back to the guild hall just in time.
[WC: 777]
_____________________________________________________________________________________
SKD1218
« View previous topic · View next topic »