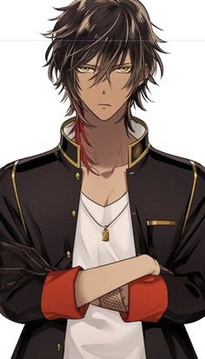 Aletheia Lux
Aletheia sighed softly to herself as she walked the streets of the Ace of Spades late at night. Used to the oppressive heat of the desert, she wore a jacket over her plain white dress, even though the night was a fairly warm one. In these lands, far away from the sun-blasted sands of her once-home, she always felt a bit chilled. Perhaps she would grow accustomed to the more temperate weather in time, but for now, she made do by bundling herself up.

The moon was new that night, and even the stars were shrouded by clouds, leaving the guild town covered in darkness, pierced only by lanterns and torches. Despite the deep blackness, Thea felt safe, for once. Even though she could not use her magic at the present, given there was nowhere near enough light to draft from, she was far away from the Chromeria and it's agents, and Sabertooth took strides to keep the Ace of Spades as safe as possible. That was why she, a young woman with no idea of her true beauty, felt secure walking alone at this time of night. Unfortunately for her, that sense of security was false, this time.

As she passed an alley filled with shadows, she heard something behind her. It was a slight sound, almost unnoticeable, but it was  unmistakably the sound of a leather shoe scuffing on cobblestone. She whirled around, eyes spinning wildly through colors. Coming out of the alley was a gang of men, dressed roughly and armed with knives. She backed away in a panic, only to slam into something solid but slightly giving. Something that gave a harsh chuckle and wrapped an arm tightly around her neck.

"Well now, ain't this a good night." the man said, his voice low and gravelly, smelling of cheap grain alcohol. The other thugs snickered and chuckled in agreement. "We caught ourselves a fine young girl, and now she gets to be our... guest." The gang crept closer, brandishing their knives threateningly, making sure the implication of the word 'guest' was not lost on her. At the same time, she felt the point of another knife press lightly against her side, right where a single thrust in and slightly upwards would be lethal. Whoever these men were, they were professionals, despite their rough dress. They clearly knew what they were doing, and Thea could spot no rust or damage on any of the blades, indicating that they took good care of them. And the young woman had no doubt that their intentions were foul. If she let this carry on as they expected it to, she knew she would never see the light of day again.

"Unhand me, you foul beast." she stated, her voice calm and clear in spite of her predicament. What she got in return was a prick from the knife, drawing blood that began to trickle down her side and stain her dress, and a low laugh from the men.

"Oh dear, we seem to have landed us a feisty one." her captor said, an edge of sarcasm in his voice. "Lady, it will be far easier for you if you just come with us and don't make a fuss. Don't even think about screaming, either." He seemed to think the situation was well in hand. She appeared harmless, there was no one else around, and seven men armed with knives would surely put fear in the heart of any young woman. Unfortunately for the thugs, Aletheia Lux was not any ordinary young woman. She was a drafter, trained in the Chromeria. She was the Prism. And she had a trick up her sleeve. Quite literally, in fact.

As the man behind her was distracted by her speaking, she flexed her left wrist slightly, allowing the mag torch she'd stowed in her jacket sleeve to slide into her hand. Unlike those made in the Chromeria, this one had no self-igniting fuse cap. She hadn't had the resources needed to make such a thing in her new home. But she didn't really need it. Even though there was no light around, there was plenty of heat. Thea dilated her pupils to the sub-red wavelengths, sacrificing her color vision to see below the visible spectrum. The men in front of her shone with heat, clearly excited. The Prism took a moment to be disgusted at where most of that heat was concentrated, then drew it in through her eyes, drafting it into sub-red luxin, and pushed it out through her skin, focusing it on the fuse of the mag torch.

The thugs cried out in shock, pain and fear as blinding white light suddenly poured from her hand, causing them to reflexively stumble back, even the man that was holding her. Aletheia dropped the torch on the ground - it wouldn't extinguish for another five minutes, even if it was underwater - and rolled her shoulders out. Then she drafted.

First, a small patch of white over the nick in her side, the light slowly seeping into her skin and healing the wound. Next, something only she could do. She pulled the white light into her eyes and split it within her body. Yellow luxin burst from her hands, forming short spears tipped with blue and laced with green for flexibility. As the street thugs recovered and leapt at her in anger, she spun, using a form her tutors had called 'Dancing the Spears.' It was an accurate moniker, as her steps looked like that of a dance as she twirled out of the reach of her attackers, the spears lashing out and knocking knives from hands. An enterprising young robber, evidently a low-level mage, shot a fireball at her, which she promptly blocked with a shield of blue and green.

The fight was brief, but heated. The alleyway toughs threw everything they had at her, but she was better. Shields blocked their magic and bullets, once one of them decided to throw caution to the wind and bring out his pistol, and swords and spears inflicted wounds and disarmed them. She even threw a lash of fire, conjured of sub-red and red, at a water elemental someone summoned in the form of a serpent. Colors spun from her like a kaleidoscope, drawn in through her eyes and pushed out through her skin. The luxin glowed, slowly dissolving back to light, and was visible under her pale skin and white dress, moving like threads of glowing color through her flesh.

At the end of the fight, the seven men were trussed up, bound with ropes of green and shackles of blue, waiting for the town guards, or another Sabertooth mage, to find in the morning. Aletheia brushed the dirt off her dress and jacket, then walked away just as the mag torch ran out of fuel and burned out on the ground behind her. She was heading back to the castle at the top of the hill when a voice stopped her.

"Excuse me, miss, may I talk to you for a moment?" said an old man, stepping out in front of her. Thea had enough luxin left over, under her skin, to form a dagger of yellow and blue.

"If you're here to accost me like those other men, I suggest you remove yourself from my path." she said, wrapped in the emotionless rationality of blue. The man hurriedly raised his hands, shaking his head.

"No, no, of course not. I saw what you did, and I'm not a fool." he said, causing Thea to relax slightly. She tensed again as the man reached into his bag, but relaxed again when he pulled out what appeared to be a glass prism. It was triangular, about six inches long and an inch tall. He held it in his hands, looking at it with what approached reverence. "Have you ever heard of the Prism Dragon?" he said.

"No, I have not." she replied, shaking her head and allowing the luxin knife to boil away into light. She didn't think this man meant her harm, and even if he did, she had another mag torch up her right sleeve.

"The Prism Dragon was a mystical being, seeming to be made all of glass. It's breath was pure light, bringing life to the valley in which it lived. I was... jealous of it's power, it's magnificence. I was jealous of how it was viewed as a god. So I crept into it's den and stole this prism, the source of it's magic. But I was reviled by my peers, shunned by my friends. They said I had killed their god, and evicted me from my home." he said, his tone quiet and somber. "I tried to use the Lacrima on myself, to give me power, but it never worked. Since that day, I have wandered, looking for someone worthy of it." The man looked up at her, wonder in his eyes. "Watching you fight... The way colors burst from you... It reminded me of the dragon. And I knew you were the one." Hands trembling slightly, he thrust the Lacrima towards her. "Take it, and use it well. Perhaps I can atone for my sin, all these years later..."

Thea took the prism and looked at it curiously. It was light, lighter than it should be. As she angled it towards a nearby torch, it caught the light and refracted it perfectly, glittering with pure color. She had seen many prisms in her day. Her chamber at the Chromeria had dozens of them. But they were all handmade, and were always impure, even slightly. None of them had split light like this one. She could tell it held powerful magic within it. She looked up at the man, overwhelmed. "Thank you." she said, hugging it to her chest. "I promise, I will use this to the best of my ability."

"That is all I ask, child. May your light shine in the darkness, the way it did tonight." he replied, then turned and walked away, leaving Aletheia with her new Lacrima.

» A Light in the Dark (Social/Private)
» A Serious Battle Against a Foe From the Darkness -- Char Lig's Inner Light Shines Through!
» FIRE BURNS BRIGHTEST IN THE DARK [Job ^-^]
» The Brightest Star • Private
» Every Time the Moon Shines, I Become Alive[Private Job - Marceline]